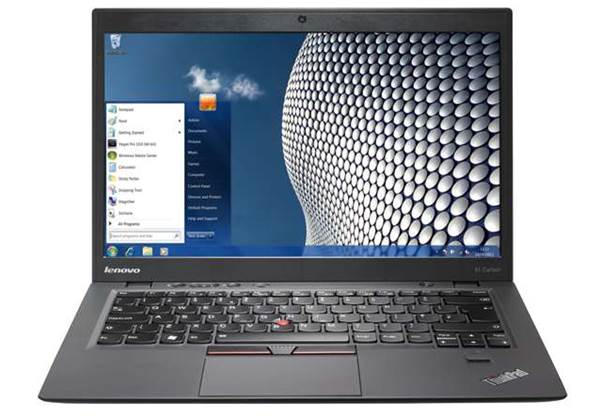 Lenovo’s 2011 vision of the ultimate boardroom ultraportable, the ThinkPad X1, simply didn’t live up to expectations.

Now, however, the company has gone back to the drawing board and attempted to right the wrongs of its predecessor. Enter Lenovo’s business Ultrabook: the X1 Carbon.
Design
Newsletter Signup 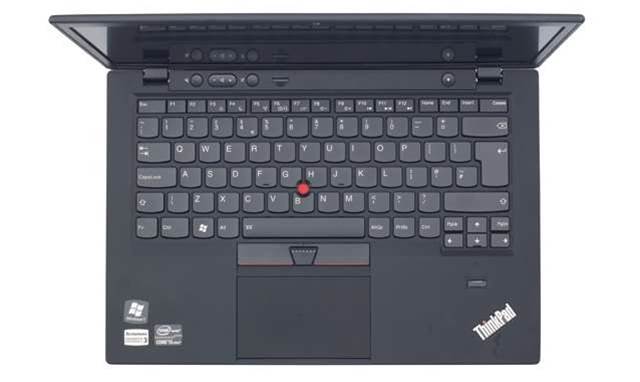 As the name suggests, a carbon-fibre skeleton keeps the new X1 feeling solid and sturdy, while a fibre-clad lid does its bit to protect the LED-backlit panel from harm.
The light-yet-strong carbon-fibre body shaves 350g from the original X1 to end up at only 1.36kg, and the chassis’ thickness has also come down from 22mm to 19mm. For a 14in Ultrabook, the X1 Carbon is exceedingly portable.
Elsewhere, Lenovo has responded to every one of our criticisms of the X1. We couldn’t be more pleased to see the back of the original X1’s glossy, 1366 x 768 panel. In its place, Lenovo has used a matte 1600 x 900 display, and image quality is drastically improved across the board.
We were pleased with maximum brightness and contrast ratio, as well as colour accuracy. Horizontal viewing angles are wide, although tilting the display back and forth to more extreme angles results in the usual contrast shift and colour inversion.
The X1 Carbon’s touchpad has emerged transformed. Lenovo has stuck with the buttonless design, but the larger touch area and the silky-smooth glass finish feel far more pleasant.
The pad depresses with a solid, confident click, two-fingered scrolling and zooming gestures work reliably and, as ever, there’s a grippy, responsive trackpoint set into the centre of the keyboard.
The keyboard hasn’t changed, but it’s still superb. Its large, well-spaced keys have a slightly concave shape that grips your fingers, and there’s enough travel to each keystroke to make it feel close to a proper desktop keyboard.
The layout is perfect, with large cursor keys, dedicated PageUp and PageDown keys, and a pleasingly wide right-Shift key. If there’s a better keyboard on an Ultrabook, we haven’t used it.
Performance
Turn your attention to the components, and the X1 Carbon remains competitive.
The base model costs $1,750 and this includes:
Our $2,127 review unit had:
Benchmark testing showed no lack of application performance, and the 128GB SSD is fast as well.
Battery life
That performance is paired with competitive battery life. In our light-use battery test, the X1 Carbon lasted 7hrs 43mins, only a little behind the best Ultrabooks.
The sealed battery is unlikely to be popular with IT departments, but replacement should be years away.
Other features
Connectivity is more patchy. There’s dual-band 802.11n wireless, Bluetooth 4 and integrated 3G and GPS, courtesy of Ericsson’s H5321gw chipset, with the SIM slot positioned behind a flap on the X1 Carbon’s rear edge.
Physical ports are at more of a premium, however, with only one USB 2 port, one USB 3 port, an SD card reader and mini-DisplayPort out. Bizarrely, there’s no Ethernet socket, and the non-standard connector for the power supply is another disappointment.
Thankfully, the business-friendly features abound elsewhere.
Lenovo’s ThinkVantage suite of software tools and control panels provide more flexibility than the standard Windows tools, and with Intel vPro in place alongside a fingerprint reader and a TPM 1.2 module, the X1 Carbon offers both security and manageability.
There are minor niggles, but with the usual ThinkPad quality now matched with excellent performance and a modicum of style, the X1 Carbon deserves its rating.
Verdict
Lenovo's Thinkpad X1 Carbon is the ThinkPad Ultrabook we’ve been waiting for from Lenovo.
Performance
Features & Design
Value for Money
Overall
Specs
$2127 AUD
(pricing info)
Copyright © Alphr, Dennis Publishing
Tags:
business carbon hardware lenovo review thinkpad ultrabook x1
By Sasha Muller
Feb 25 2013
12:35PM