Lenovo ThinkPad Twist reviewed: a ThinkPad with a difference 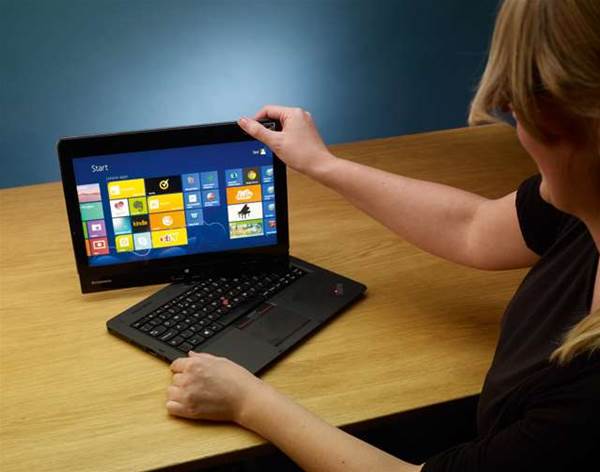 Convertible tablets are nothing new in the business sector, but convertible Ultrabooks certainly are: the ThinkPad Twist is the first we’ve come across.

Build quality
However, those expecting the usual ThinkPad build quality are likely to be disappointed. The Twist is plasticky, the central hinge is cumbersome, and when clipped into the base in tablet mode, the two halves separate at the slightest provocation.
Newsletter Signup

I have read and accept the privacy policy and terms and conditions and by submitting my email address I agree to receive the Business IT newsletter and receive special offers on behalf of Business IT, nextmedia and its valued partners. We will not share your details with third parties.
Screen and keyboard
That’s a shame, since the touchscreen is responsive, the 1366 x 768 IPS panel’s viewing angles are superb, and colours are accurate. The measured brightness of 337cd/m2 keeps the glossy panel legible outdoors, and the contrast ratio of 702:1 is excellent by any standards.
As well as a buttonless touchpad there’s also a red trackpoint set in the centre of the Scrabble-tile keyboard. Typing is a joy, but the buttonless touchpad isn’t great – we found the cursor was jittery and prone to jumping across the screen, so we disabled it and used the trackpoint instead.
With two USB 3 ports, mini-DisplayPort, mini-HDMI, an SD card reader, Gigabit Ethernet and a SIM slot for the model with 3G, the Twist is better served than most of our hybrids.
Performance
Performance lowers the tone once again, though. The Core i5-3317U CPU is no weakling, but the sluggish 500GB hard disk struggles to keep Windows 8 feeling as responsive as the SSD-equipped models this model was compared to.
Benchmark scores were not quick, and a result of only 5hrs 16mins in our light-use battery tests, is not particularly long-lasting.
Conclusion
Apart from the excellent display, then, it provides little in the way of excitement. The pricier model, which adds 3G and a speedier SSD, makes the Twist more viable for businesses, but it’s still no award-winner.
Verdict
The Lenovo ThinkPad Twist is a hybrid ThinkPad running Windows 8. So how is it different? Read the review.
Performance
Battery Life
Features & Design
Value for Money
Overall
Specs
$1169 AUD
(pricing info)
Copyright © Alphr, Dennis Publishing
Tags:
hardware laptop lenovo review thinkpad twist ultrabook
By Staff Writers
Apr 22 2013
1:37PM