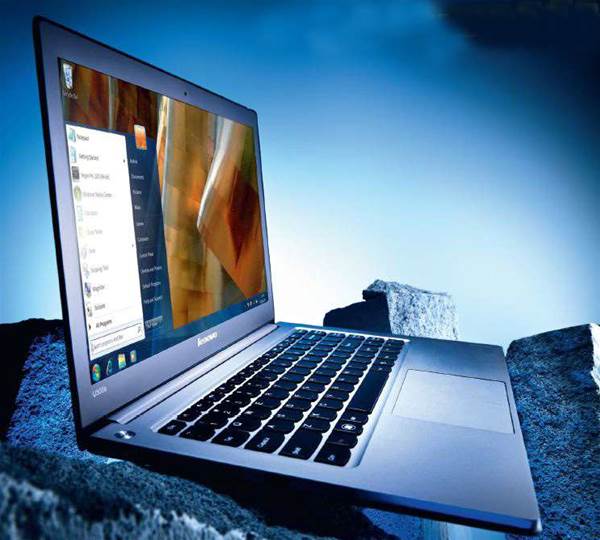 When we started out this grouptest we thought Lenovo would be selling its U300S in Australia. Unfortunately that didn’t eventuate, but we decided to keep the review to give an idea of what Lenovo is up to in this space.

From the first moments with Lenovo’s Ultrabook, we were seduced. The slight lip around the base and lid make it easy to peel the lid open, and the combination of stark, sharp edges and gentle, curved accents make for a tremendously classy laptop.

The almost completely featureless exterior feels great in the hand, and at 1.32kg, it’s plenty light enough. It doesn’t feel quite as bombproof as Asus’ Zenbooks, though. It takes barely any pressure on the lid to cause show-through on the display, and there’s a little side-to-side give in the base. Look even closer, and there’s also a few areas where the finish isn’t quite immaculate, such as the hole for the power socket that doesn’t match up with the indent beneath.

I have read and accept the privacy policy and terms and conditions and by submitting my email address I agree to receive the Business IT newsletter and receive special offers on behalf of Business IT, nextmedia and its valued partners. We will not share your details with third parties.
Gorgeous design makes the U300s the prettiest laptop Lenovo has ever built.

Nit-picking aside, though, there’s much to like. The keyboard is well up to Lenovo’s usual high standards. We’re not keen on the half-height Enter key, or the narrow right-hand Shift key, but the overall feel more than makes amends. There’s just the right amount of travel, each dab of a key giving a crisp dig of feedback followed by a soft bounce at the end of the stroke. It’s superb.

The touchpad is pretty good, too, although we were grateful for the ability to disable it: we often found our thumbs brushing past the pad while typing, sending the cursor zipping into another paragraph. That aside, it’s innocuous enough. The glass touchpad depresses with a firm, solid click, and the multitouch scrolling and zooming is prompt and intuitive.

Under the hood, Lenovo has opted for the same 1.6GHz Core i5 processor found in many of its competitors, and partnered it with 4GB of memory and a 128GB SSD. A result of 0.56 in our benchmarks puts it squarely mid-pack, but the JMicron SSD makes for a system that feels unerringly quick.

Lenovo is renowned for its great keyboards,and the IdeaPad doesn’t disappoint.

The IdeaPad also manages to keep going when some rivals have exhausted their batteries. Enduring 7hrs 7mins in our light-use battery test leaves it trailing Toshiba and Asus’ long-life models, but it isn’t far behind.

The first stumble comes with the Lenovo’s audiovisual performance. With a maximum luminance of only 160cd/m2, the IdeaPad’s display looks noticeably dim to the naked eye. It’s a shame the backlight isn’t stronger, since image quality is reasonable. The measured contrast ratio of 225:1 puts it just ahead of all bar the Samsung, and when it comes to colour fidelity, the IdeaPad makes a reasonable stab at delivering neutral, untainted tones.

Connectivity is typically frugal. The IdeaPad U300s has a single USB 3 port, a single USB 2 port, a full-sized HDMI socket and a headphone jack. There’s no Ethernet socket, and wireless connectivity is limited to single-band 802.11n and Bluetooth 3.

The dim screen weighs heavily against the IdeaPad U300s, but this is still an alluringly lovely laptop. It bodes well for Lenovo’s future offerings in the Ultrabook space, which we will hopefully see eventually winging their way to Australia.