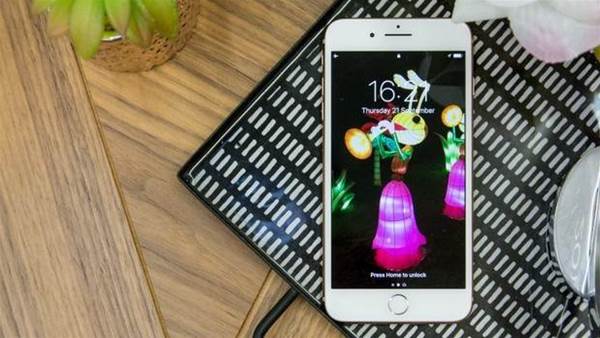 Apple’s phones are usually pretty quick, but this year it has outdone itself. In fact, the hexa-core A11 Bionic chip in the iPhone 8 Plus is so good it leaves not only its predecessor but also every single Android flagship, including the Samsung Galaxy S8, in a trail of dust. 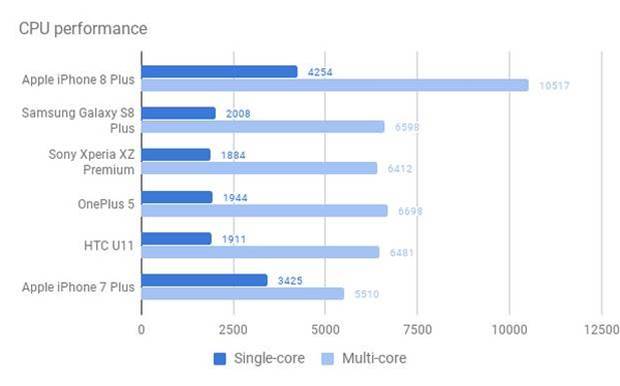 It’s the fastest phone we’ve ever benchmarked, as the graphs above and below show. 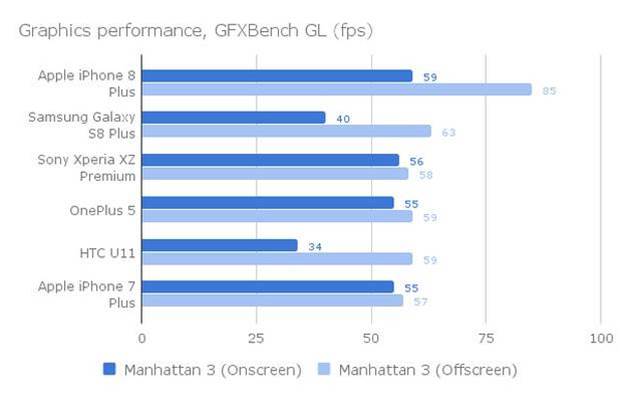 Battery life on the iPhone 8 Plus is decent but not awe-inspiring. This may be explained by the fact that, although the chip is supposedly more efficient, Apple has actually reduced the size of the battery in the 8 Plus versus the 7 Plus – to 2,675mAh from 2,900mAh. The iPhone 8 Plus does now support ‘fast charging’, promising 50% charge in 30 minutes if you use a 12W iPad Pro charger.

In our video-rundown battery test, in which we run all handsets in Flight mode with screen brightness set to 170cd/m2, the iPhone 8 Plus lasted 13 hours 54 minutes, not bad but way behind the Samsung Galaxy S8 Plus (and the S8).

Running Qi-enabled wireless charging technology means you can place the iPhone 8 Plus on any compatible charger, should you start running low.

The wireless charging option also means you can now listen to music and charge at the same time, something Apple made impossible when it removed the headphone jack. Yet wireless charging has removed the option of being able to use your phone while it’s charging so Apple has given with one hand and taken away with the other.

The Apple iPhone 8 Plus is a very fine smartphone. Its battery life is good, the cameras are impressive and wireless charging is a nice touch even if it does come years behind its Android rivals. But it’s not the best you can buy.

Its blinding speed is a moot point seeing as most users won’t notice such a leap and the improvements included with iOS 11 are available across other modern iPhones and iPads. That said, the new software has been designed to work most effectively with the new hardware.

So we’d be lying if we said the iPhone 8 Plus was a must-have upgrade for iPhone 7 Plus users – particularly given its pricing: $1,229 for the 64GB version or $1,479 with 256GB of storage. In fact, with the iPhone 7 Plus still available and discounted to $1,049, that could be an enticing upgrade for those with older, smaller iPhones. 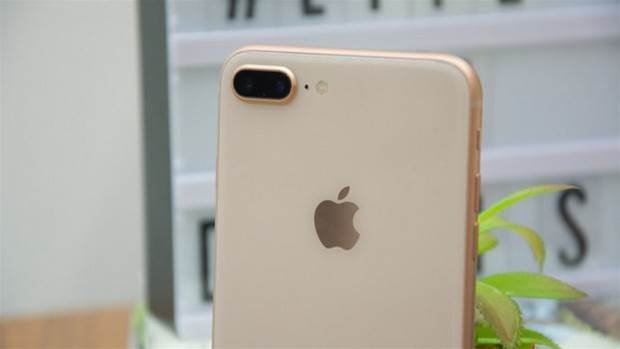 The same can be said for the regular iPhone 8. Based on our early impressions, we can’t say it’s must-have upgrade for iPhone 7 users – and with the iPhone 7 now selling from just $849, it’s a good-value option for those with older Apple handsets.

The main issue, and it’s the same one that has raised its head over the past few years, is that you have to switch to Android to get a better phone. If you’re willing to do so, the obvious options are the 5.8in Samsung Galaxy S8 (at $1,199) or 6.2in Galaxy S8+ ($1,349). If you want dual rear cameras, the Galaxy Note 8 offers that, along with a 6.3in screen squeezed into a body that’s only slightly bigger than the iPhone 8 Plus, although it comes at a premium – $1,499.

The iPhone 8 Plus isn’t particularly cheap on contract, although it’s not the most expensive either. At the time of writing, Virgin was offering the cheapest 2GB, two-year plan at $75 per month. A Galaxy Note 8 on the same plan costs $80 per month, while the Galaxy S8 costs $69 per month.

If you’re already locked into Apple’s ecosystem, though, and you’re moving up from an iPhone 6s or earlier, the iPhone 8 Plus is the model that makes the most sense in Apple’s new range. It’s the best smartphone Apple has ever made, at least until we see the iPhone X, and packs in more features than the regular iPhone 8.

Verdict
The Apple iPhone 8 Plus is faster than it's predecessor, has double the storage, wireless changing and some other enhancements, though it's not a compelling upgrade for iPhone 7 Plus users – and not the best smartphone on the market. It is a very fine handset, however, and well worth considering for users of older, smaller iPhones.
Overall
Specs
From $1229 AUD
(pricing info)
• www.alphr.com
5.5in IPS display with 1920 x 1080-pixel resolution and True Tone technology; Apple A11 Bionic processor; 64GB or 256GB storage (no microSD); dual 12MP rear cameras (ƒ/1.8 for wide-angle lens and ƒ/2.8 for telephoto); 7MP front camera; Qi wireless charging; IP67-rated dust and water resistance; iOS 11; 202g.