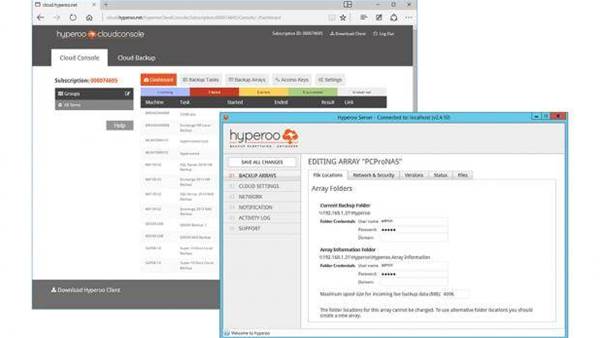 Looking for a versatile, affordable business backup solution? Hyperoo could be what you're after.

Hyperoo focuses on backup for Microsoft Hyper-V virtualised servers, as its name implies, but it can do much more than that. It also supports backup arrays in the cloud, on local systems, NAS appliances or other devices.

Installation took us five minutes per system, with the routine giving us the choice of loading the client, server, live backup and management console components. The client is used to create and manage backup tasks, while systems hosting a local backup array require the server component.

As well as backup software, Hyperoo offers cloud backup. You create your cloud backup arrays through the Hyperoo web portal, and we chose from five geographical locations, entered an encryption key and decided how many file versions we wanted to retain. For our arrays, we loaded  the local management console on a system running the Hyperoo server and selected our target folders.

You can use any storage device  as an array, if the system can access it. On a Windows Server 2012 R2 rack server, therefore, we designated local hard disks, external drives, NAS shares and IP SAN targets as backup arrays, on each of which we could set passwords and apply AES-256 encryption.

Creating a backup job was a simple five-step process, which involved selecting the files, folders and Hyper-V virtual machines we wanted to secure, then entering the backup array location, choosing from three backup modes and scheduling jobs to run as often as every minute.

Once a full backup has completed, Hyperoo employs deltas: it only copies changed blocks in subsequent runs. Along with standard backups, the Change Tracking mode keeps a record of modifications and sends these at the next scheduled synchronisation. The Live Backup mode streams the changes in real-time and is best suited for use with local arrays – unless you have the internet bandwidth to cope.

Hyper-V backup is a cinch. The local Hyperoo client displays all of the available virtual machines on our server, at which point the process is no different to creating a file backup: we just picked the VMs we wanted, chose a backup mode and scheduled the job.

Hyperoo really comes into its own if you’re using Hyper-V to host Exchange and SQL Server. To test this, we created a job to secure our virtual machines to a local backup array using the Live mode and supplemented it with a scheduled cloud backup task using the less bandwidth-taxing Change Tracking mode.

Data restoration is equally swift because the client’s restore tab provides lists of files, folders and VMs, which can then be restored to either their original location or another folder. Performance for our IP SAN backup array was good: securing a 25GB test file over a Gigabit connection returned an average throughput of 71MB/sec, while restoring it averaged 65MB/sec.

We secured a Hyper-V virtual machine with an 8GB virtual hard disk in less than two minutes, and could get specific files off the VM by restoring its VHDX file and then mounting it as a read-only volume.

The cloud console monitors every job, including local and cloud backups and we could use it to remotely access backup jobs from a system with the Hyperoo client loaded, view their logs and edit them.

Best of all Hyperoo is very affordable, with software prices starting at US$149 for a single installation and discounts for more licences. There’s even a free version, although that has limitations as you’d expect, including lack of network support and maximum of 10,000 files. Hyperoo Cloud Backup starts at US$75 per terabyte per month, with the per-terabyte price dropping as you scale, and it covers unlimited client licences.

Verdict
Hyperoo is a very affordable business backup solution that’s available as software for local and network backups, or as a cloud service. It’s ideal for securing Hyper-V environments but is much more versatile than that.
Overall
Specs
From $149 USD per licence (or from US$75 per terabyte per month for cloud backup)
(pricing info)
• www.hyperoo.net