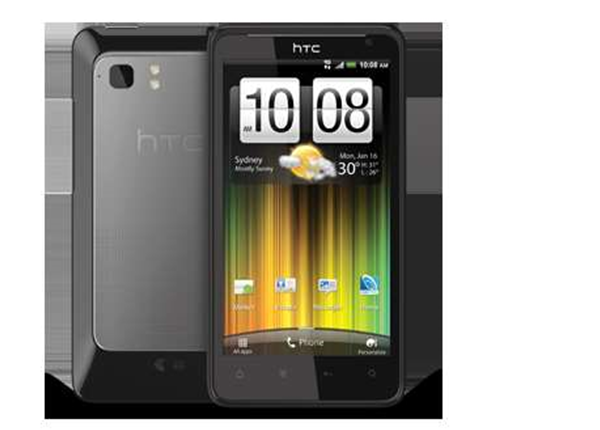 Much has been said about 4G/LTE in Australia, with Telstra being the first to offer the much lauded data speeds, firstly via USB dongle and now with the first 4G enabled smartphone available locally, the HTC Velocity. It’s impossible to consider one without the other, so we will be looking at both the hardware, as well as the 4G network performance.

The handset itself is fairly workmanlike compared to some of the models we’ve seen from HTC in the past. At 164g the weight is nice without being particularly light and the size is around average – 128.8 x 67 x 11.27mm compared to the much smaller-screened iPhone 4S’ 115.2 x 58.6 x 9.3mm. The aforementioned 4.5in screen is bright, with qHD (540 X 960) resolution. Missing too are the quirky design elements that HTC have added to smartphones like the Sensation and the Incredible, although it’s not clear if this has been a deliberate choice to highlight the “business phone” aspects of the Velocity.

Similarly, the 1.5GHz dual core processor is about average for today’s crop of dual-core phones – we obtained a Quadrant score average of around 2300, putting it fairly well in the middle of the group. The Sunspider score of 2627ms is likewise placed. The Sense UI is what we’ve come to expect from HTC, with a few Telstra exclusive add-ons. All up, when compared to other available handsets in terms of power and physical design, the Velocity rates as extremely competent, if uninspiring.

If that seems like we’re damning with faint praise, it’s important to note that the battery life was solid, with around 35% left after our 24 hour testing – a good result in today’s power-hungry smartphone world. It was also reassuring, as we were initially unsure if 4G connectivity would prove to be overly power draining. We did note that using the Velocity as a WiFi hotspot was a real battery killer, but no more so than any of the other phones with the same feature.

Telstra’s 4G network is limited, but was surprisingly larger than we initially expected. In capital city CBDs, the 4G connectivity extends around 5km from the GPO, but it can also be found in some suburbs and in a number of regional areas. Due to the mid-rollout nature of the network, you’ll want to check if your area is covered before making the purchase plunge. There is also an interactive map of Telstra 4G areas in Australia available on the Telstra website.

Telstra is integrating 4G across its 3G network, meaning that the Velocity will slip seamlessly from 4G to 3G as you move from area to area. Interestingly, even when directly in the centre of Sydney (where we did much of the testing) the phone never seemed to find a full 5 bars of connection to the 4G network, usually sitting between 2-4. Out in the periphery of the connectivity zone, we usually saw 1-2 bars.

That said, the speeds were intimidatingly quick. Using the Speed Test app from the Android Marketplace, we saw around 32,000Kbps even on one bar of 4G and when directly in the city, we often redlined at 40,000kbps plus. Upload was lower, but still up around the 15-20,000Kbps mark.

It’s important to note that these scores are unlikely to reflect day to day usage once the network attracts more customers – or to put it in a slightly old school internet way, your mileage may vary. Currently, Telstra’s 4G network is only being used by consumers with the 4G USB modem and anyone with a Velocity, so the bandwidth is being relatively untouched. As the number – and variety – of 4G enabled devices grows, expect to see a decline in these numbers, although it’s worth noting that even a massive tumble of 10Mbps would still allow for 30Mbps speeds in some cases.

It’s difficult to score the HTC Velocity as the handset’s “killer feature” is its access to a data network that’s still in its infancy. Similarly, one cannot really rate Telstra’s 4G network as a stand-alone offering – the real test will be how it compares to Optus’ 4G network (arriving in April-May) or Vodafone’s (no launch timing specified). At the moment, the speeds seem to be almost out of this world – in the realm of science fiction really – but that will rapidly change as the user base grows, familiarity sets in, and other networks launch allowing for comparative testing. Until then then, the Velocity is a functional, middle-ground phone that works on a very impressive 4G offering with limited areas of accessibility.