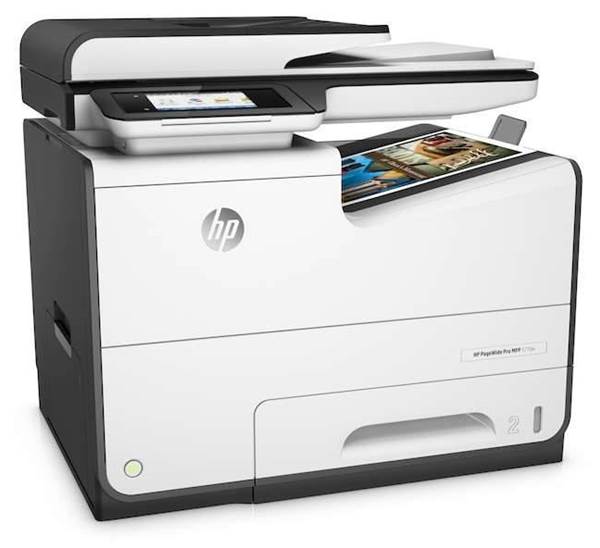 The HP PageWide Pro MFP 577dw features a new type of inkjet technology. We put it through its paces to see how efficient it really is.

HP’s new PageWide range of printers gets its name from a new type of printhead that extends the full width of the page.

Conventional inkjets, such as HP’s Officejet range, work by shuttling a narrow printhead back and forth across the page, which takes time. PageWide printers are able to deposit an equivalent stripe of inks almost instantly though an array of tens of thousands of nozzles, so only the paper needs to move.

This means PageWide printers can offer the print speed and quality of a laser but at significantly lower total cost, according to HP. The company says the total cost of ownership cost is at least 20 percent (and up to 50 percent) cheaper than equivalent colour laser printers. Furthermore, there is no drum or fuser to be replaced, with redundant nozzles in the printhead in case some become blocked or otherwise fail.

We tested the HP PageWide Pro MFP 577dw, an A4 multifunction device (MFD), to see if it lives up to the company’s claims. It’s a hefty piece of kit, with a footprint more like that of a colour laser MFD than that of an inkjet device. It might be worth considering the 577z freestanding variant that includes two extra paper trays and a cabinet base.

Setup is straightforward, but even though an installer CD is packaged with the device you end up downloading the software. The 577dw provides handy animated instructions for tasks such as installing or changing the ink cartridges, but you can't follow along as opening an access door halts the playback.

HP claims a first-page-out time of around six seconds, and either 70ppm (pages per minute) in 'general office' mode or 50ppm at 'professional' quality.

In our testing, the 577dw achieved a first-page time of 14 seconds from clicking the Print button to the sheet dropping into the tray, or 8 seconds from the first indication that the printer was receiving data. Subsequent pages in our test business test document (mixed text, graphics and photos) averaged 28 pages per minute in general office mode and 25ppm in professional mode. A simple text-only document emerged at the rated speeds of 70ppm (general office) or 50 ppm (professional).

According to HP, the difference between the two modes is minimal, and we're inclined to agree. Professional quality does give slightly better results, but you have to look hard to see the difference and we think most users would be happy with general office as the default. We also agree that the print quality is equivalent to that of a laser, but those who prefer the somewhat shiny 'laser look' probably won’t be satisfied.

Photo printing on normal paper gives the expected results: acceptable but on the dull side.

Copying and scanning gave generally good results, though we noticed a slight green cast when copying colour photos that wasn't apparent when the same images were scanned and then printed. Both sides of the page are scanned simultaneously when using the automatic document feeder.

The 'd' in 577dw indicates support for duplex printing. In our testing, duplexing added 3 seconds to the time to print each pair of pages – a small penalty for the amount of paper saved.

Like other models in its class, this one supports stored jobs. Documents printed from a computer can be held until a PIN is entered to improve privacy/confidentiality, the first of multiple copies can be printed and the remainder held until the job has been checked, and documents can be stored indefinitely and printed on demand.

In addition to printing from computers via Ethernet or Wi-Fi, the 577dw caters for mobile devices via the HP ePrint app for Android and AirPrint for iOS devices.

Wi-Fi Direct support means nearby devices and computers can use the 577dw without having to connect to the local network, which is particularly handy if you want to provide a visitor with access. It's even easier when a device supports NFC, as bringing it close to the MFD’s control panel initiates a connection without having to mess with passwords. While we’re talking about the control panel, the touchscreen is bright, clear and responsive.

Various operations can be initiated from the control panel, including copying, scanning and faxing (we did not test the 577dw’s fax capability). That includes direct printing from USB storage, with the port conveniently placed on the left side of the control panel. Common file types supported including PDF, JPEG and Microsoft Word are supported. Scanning to USB is available, with the results in PDF, JPEG, TIFF or XPS format.

A variety of print apps can be optionally installed on the 577dw. Some fall into the productivity category (such as the ability to print from Google Calendar, or to print from or scan to Google Drive), while others are informational (such as print a summary from ABC News each day). Well leave it to you to decide whether to install the apps for printing paper planes or paper dolls.

While the 577dw didn't strike us as being particularly noisy, the manual does contain the note: “HP recommends that the printer be located in a room in which no employee has a regular workstation.” You wouldn't want it within a few metres of your desk, but subjectively it seems no worse than others in its class.

When compared with the low-end inkjet MFDs on the market, $949 seems relatively expensive even though a few years ago a printer with these specifications cost three or four times as much. You get a lot of printer for your money with the 577dw, especially in terms of flexibility, speed (up to 70ppm), durability (up to 6,000 pages per month) and low running costs (if HP's claims are correct).

Furthermore, the 577dw uses about 15 percent of the electrical power required by comparable laser MFDs according to the company, but then all inkjets are relatively thrifty in this regard.