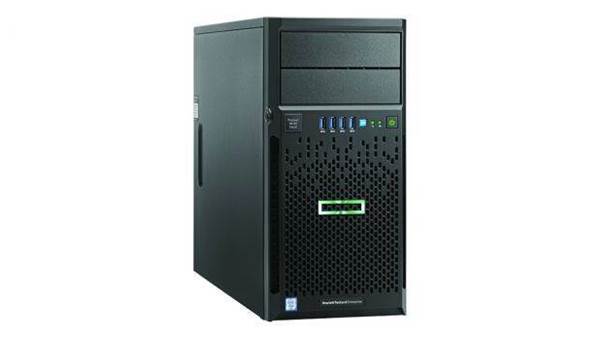 It may be inexpensive, but the ML30 is also ideal for small and mid-sized businesses with an eye on the future.

Growth and evolution can be a challenge for small businesses, but HPE’s ProLiant ML30 Gen9 is a server that will keep up. We’ve seen it selling for as little as $1,200, so it’s very affordable too.

That $1,200 model included a 3GHz Xeon E3-1220v6 with 8GB of DDR4 memory, but HPE also offers other processors in Intel’s latest-generation Xeon E3-1200 v6 server range (though you might still find some models with older v5 chips), along with up to 64GB of RAM.

The ML30 contains a four-bay, large-form-factor (LFF) drive cage hidden behind the lockable bezel. You should be able to tailor storage to your requirements, since HPE offers an excellent choice of drives spanning high-performance SAS, mid-line SATA and low-cost SATA plus SSDs. If you want more choice, HPE’s options include four-bay non-hot-plug (NHP) and hotplug cages, and stretch up to an eight-bay hotplug small-form-factor (SFF) cage.

It’s worth mentioning that HPE’s hotplug carriers aren’t just about the sockets: they’re packed with status LEDs. Although these are partially obscured by the bezel, they show you at-a-glance how healthy your drives are, when they’re being accessed and, in the case of a RAID array, which volumes can’t be safely removed with the server running.

On the subject of RAID, your options begin with the embedded Dynamic Smart Array B140i controller, which offers RAID 0, 1 and 5 arrays, and supports both four- and eight-bay cages. It can only handle SATA drives, however: if you want high-performance SAS drives then you’ll have to pay more for the Smart Array P440 controller.

There’s plenty of room to expand in other directions too. Along with dual Gigabit Ethernet ports, the motherboard has four available PCI Express slots. There are also two free 5.25in bays above the hard disk cage.

One notable strength of the ML30 is its top-tier remote management capabilities. The motherboard sports HPE’s standard-setting iLO chip, which shares access with the first Gigabit port and provides the best web portal on the market. It’s crammed with useful information on server status, along with direct links to HPE support.

The price also includes an iLO Standard licence, which enables remote power controls – but to get full OS remote control and power metering you’ll need an Essentials upgrade. The Intelligent Provisioning feature of the iLO chip is a winner: it helped us get Windows Server loaded up with the correct drivers inside 20 minutes.

You can even make use of HPE’s free System Management HomePage tool: this provides a basic web interface with useful details on critical hardware components. HPE’s Insight Control software offers complete network systems management, but it costs extra and is best suited to larger businesses with multiple systems and servers.

While it isn’t the most power-efficient server we’ve seen, the ML30 Gen9 won’t wreck your electricity bill: with a single 460W PSU and a pair of 1TB SATA data drives, we measured an idle power draw of 35W, peaking at 92W with the CPU under load. This server will also appeal to those who value peace and quiet: from one metre away we measured it as a barely audible 36.2dB.

The ML30 Gen9 is a great choice for small and mid-sized businesses with an eye on the future. The low starting price makes it very good value, it’s endowed with the best remote management tools in town, and it offers plenty of upgrade space to keep in step with demand.

Verdict
The ML30 Gen9 is a great choice for small and mid-sized businesses with an eye on the future. The low starting price makes it very good value, it’s endowed with the best remote management tools in town, and it offers plenty of upgrade space to keep in step with demand.
Overall
Specs
From $1200 AUD
(pricing info)
• www.hpe.com
Tower with 4 LFF drive bays (or, as an option, 8 SFF bays); Intel Xeon E3-1200 v6 (or v5) Series processor; 8GB–64GB DDR; support for SATA drives (with SAS upgrade an option); 4 PCIe 3 slots, 2 Gigabit Ethernet and 10 USB ports; 350W PSU (460W redundant).