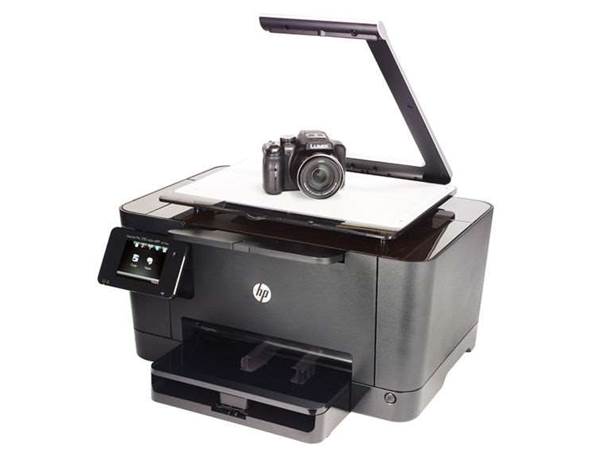 An innovative take on the all-in-one, but a mini photo studio on top of a printer is extremely niche.

The last all-in-one printer to try something totally different was the Lexmark Genesis S815, which crammed a 10-megapixel camera into an upright chassis to give instant “scans”. Perhaps taking its cue from that, the HP TopShot LaserJet Pro M275 takes the same concept, but carries it in a completely different direction. The printer itself looks like any other, but instead of an ADF on top, HP has fitted a flat white scanning tray. Above that extends an 8-megapixel camera arm, with lenses pointing downwards to capture whatever sits on the tray, be it a document or, intriguingly, a 3D object. It does so by snapping six times, with and without flash and at various exposures, then merging those shots into a single composite image.

It’s undeniably fun to play with. We tried a wide range of objects – fruit, mobile phones, body parts, even a mini-PC – and the device did its object-scanning business in as little as 35 seconds, depending on quality and complexity. You can spit the resulting image straight out onto paper, or use HP’s software to automatically crop it to size and remove the background, which works very well. It can then be saved as a PDF, JPEG or PNG for quick use online.

The results were surprisingly good at first. With small objects, such as an orange or a pocket multi-tool, the TopShot produced what can only be described as a perfectly usable brochure shot. If the product is an odd shape you’ll need to angle it to face the camera, but for an online shop selling small items, it’s a quick replacement for a light tent and a DSLR.

The key phrase there, though, is “small items”, as moving up the size scale sees diminishing quality. The closer to the camera an object gets, the more the TopShot struggles to capture the correct perspective, and we’re not talking particularly big objects here: we tried a Panasonic bridge camera lying on its back (total height 110mm) and the resulting image made the lens look huge (see below, left). A smartphone in a dock created a mess of an image, and we noticed far more grain and noise with larger objects, particularly those with dark, glossy surfaces.

It can scan documents, too, but they go through the same photo process as 3D objects, and the results are underwhelming. A text document wasn’t too bad, capturing all the necessary information with reasonable sharpness, but the camera struggled with glossy photographs. Darker areas blended together and lighter areas were bleached out; the multiple exposures clearly confused it.

As for the printing element of the job, the TopShot is a fairly ponderous but good-quality colour laser. It fits its four toner cartridges into its small chassis by putting them on a carousel that rotates before each print, so each colour can apply its toner to the drum before the paper is passed through.

This means it isn’t the fastest printer out of the blocks. We measured the TopShot at 4ppm printing a colour newsletter (right on the claimed speed), and 3.75ppm with a 12-page Excel workbook, while a single A4 colour photo montage took 17 seconds. It’s far quicker without the colour, averaging 15ppm with a mono A4 letter, slightly below the claimed 17ppm. Quality is good, with sharp text, solid areas of speckle-free colour and a decent stab at a neutral greyscale print. Our test photo showed colours were a little murky, but that’s a minor complaint.

The rest of the device is standard all-in-one fare, with a 150-sheet input tray at the base and 50 finished sheets feeding out beneath the scanning tray. It has USB 2, Ethernet and Wi-Fi connections, and connecting it directly to a network gives access to HP’s range of on-device apps; we found little to get excited about. On the subject of apps, the TopShot is one of a fast-growing number of HP devices to print from mobile devices via Apple’s AirPrint, as well as HP’s own ePrint services.

The $425 price is high but should fall a little at retail, but the big question is who the TopShot is for. Its standard document-scanning routine takes every bit as long as a 3D object, so it isn’t a good choice for a busy office, and the print speed is low for a laser these days. Also, it doesn’t capably shoot objects above a certain size, which limits its appeal to those looking for cheap, fast product shots of palm-sized objects. If you run a small eBay shop this may be what you’ve been dreaming of, but there’s no getting away from the fact that HP’s commendable innovation has resulted in what looks to be an incredibly niche product