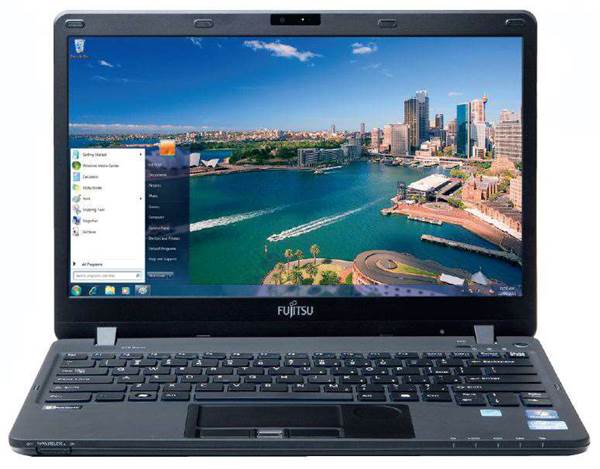 One of the biggest things Intel has done with its Ultrabook push is to shift expectations of thin and light laptops. Despite the fact that we haven’t seen them hit the kind of price points promised when we first heard about Ultrabooks, they offer thin and light performance at prices comparable to ‘standard’ laptops. This is going to be a problem for Fujitsu. It is a company that makes wonderfully crafted pieces of computing, but does so at the high end of the pricing spectrum. This worked when other manufacturers were also making expensive thin and light laptops, but doesn’t in 2012. Fujitsu’s Lifebook SH771 is an exemplar of this problem – it has impressive specifications, looks and feels great and packs a reasonable punch thanks to a Core i5 CPU. But it is also more expensive than the HP Envy Spectre, coming in at just under $2200.

Look at the rest of the spec list and there is little to differentiate it from the Ultrabook pack. The CPU packs more punch than the kind of low power i5 that fits in an Ultrabook, with the SH771’s i5-2520M sporting a 2.5GHz clock speed as opposed to the 1.6GHz speed of the i5-2467M. The laptop also has an Optical Drive and Expresscard slot, which aren’t Ultrabook staples.

But leave those factors aside and the rest of the features can easily be found elsewhere – the SH771 has three USB ports, one of which supports USB 3. It also has HDMI, audio in and out, gigabit Ethernet, D-Sub and an SD card reader. In terms of Wireless is has 802.11abgn Centrino N-6202 wireless adaptor but no Bluetooth.

We did really like the build quality, and the rubberised plastic finish makes for a very nice grippy feel. The lid seemed to be especially bendy, although the build quality is high enough that we didn’t envisage this becoming a problem.

The scrabble-tile keyboard is comfortable to type on, but feels like the keys bottom out a bit too soon to make it a truly enjoyable experience. Under the keyboard lies a nod to Fujitsu’s predominant Business focus, a touchpad with discreet left and right buttons and a fingerprint reader in between. There is also Fujitsu’s curious little secondary scroll pad to the right, which we found annoying to use properly, and just stayed with using the side of the touchpad for scrolling.

Turn it over and more of Fujitsu’s business legacy shows. Not only is the battery removable, but memory and hard drive are user accessible, and the optical drive can be removed and replaced with a Weight Saver. 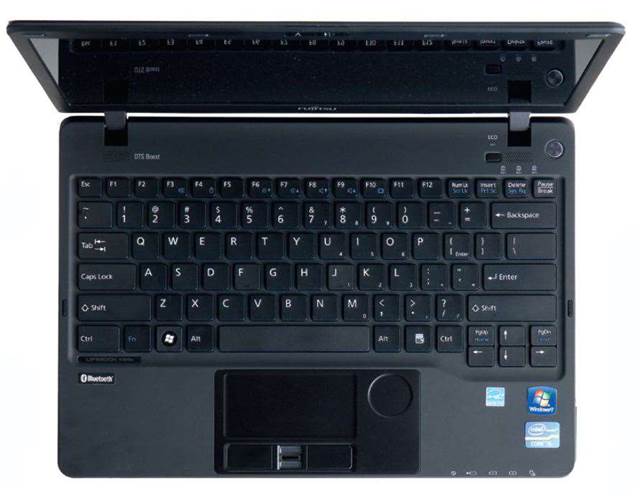 Given the high price tag and small form factor we were curious to see just how things performed in our real world benchmarks – this would be where the higher speed CPU should shine, and where the SH771 should differentiate itself from its Ultrabook competitors.

We compared the results with Acer’s Aspire S3 Ultrabook, which uses a Core i5-2467M. In our real world benchmarks the SH771 managed a score of 0.64, beating the S3’s score of 0.55 by a significant margin. In fact, the score of 0.64 is near-identical to what we see from Ultrabooks running the Core i7-2677M. It shows that the ‘real’ mobile Core i5 is indeed more capable than its Ultrabook equivalent, although you could actually buy two Acer S3’s and have change leftover for the price of the SH771.

While the SH771 delivers on performance, it cannot match the S3 when it comes to battery life. In our heavy use test the SH771 managed one hour and 14 minutes compared to the one hour 55 minutes that the S3 lasted. This gap blows out even further when we look at the light use tests, where the S3 endured five hours 56 minutes to the SH771’s four hours 50 minutes (the best performer in our recent grouptest, ASUS’ UX31, managed eight hours 53 minutes in the light use test).

Unsurprisingly, given the reliance upon Intel’s processor graphics, the SH771 barely scraped through our gaming tests, delivering an almost playable 24.73 fps at low detail in Crysis. We see similarly low scores from the current crop of Ultrabooks, so it is not a deal breaker.

There is a lot to like about Fujitsu’s SH771, which likely would have scored higher a mere six months ago. However Intel has since shifted the goalposts for what we expect from mobile computing. Despite the fact that the SH771 shows that a real Core i5 will perform a bit better, it just doesn’t deal with the delicate balance of performance, price and form factor as well as Ultrabooks do. It is a good laptop, but it costs too much and delivers too little for the pricetag.