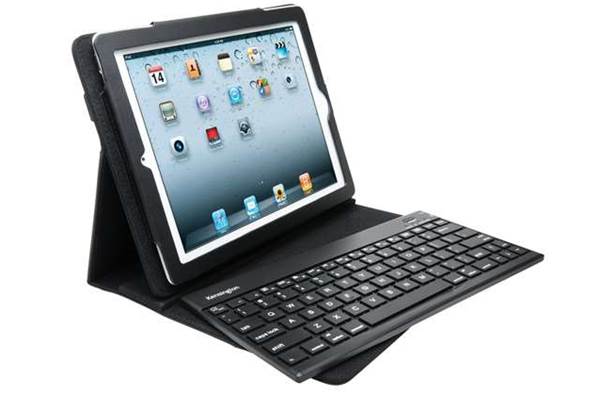 Critics of the iPad point to its limitations as an input device for creating content. The lack of a "proper" keyboard is often highlighted as stopping owners from tapping out lots of words when on the go.

However, the Kensington Keyfolio Pro 2 tries to get around that by delivering a keyboard in a sturdy case that protects the iPad and stands the screen up making the iPad into a quasi laptop.

All of the usual keys you'd see on a laptop keyboard were present with a full row of function keys. However, as these aren't really used on an iPad, they've been labelled and repurposed for iPad-specific functions. For example, the ESC key is used to return you to the iPad's homescreen and F12 locks the device so your passcode is needed to use the device (you do have a passcode enabled don't you?).

The keyboard is reasonably comfortable to use - better than the iPad's onscreen option - but it's a little cramped as it's not as large as a full-sized one. All of the iPad's button and ports were easily accessible.

Perhaps our favourite feature was the keyboard isn't fused to the case. So, while working in a hotel room, we could prop the iPad up at an ergonomically sound position and bring the keyboard closer.

Battery life was not a problem. We charged the Keyfolio Pro 2 for a couple of hours and were able to work for several hours. As it uses a Micro-USB cable, we could charge it either from a USB port on our laptop or using the same charger as our smartphone.

The Kensington Keyfolio Pro 2 has a recommended price of $99.95 and works with the iPad 2 and the new iPad.

Verdict
A "high performance" removable keyboard that protects and also acts as a stand so you can work at your iPad like it's a laptop.
Overall
Specs
$99.95 AUD
(pricing info)
Copyright © BIT (Business IT). All rights reserved.
Tags:
case hardware ipad kensington keyfolio pro 2 review stand
By Anthony Caruana
Jun 6 2012
2:37PM