First Look: A hard drive that requires a fingerprint to unlock the data 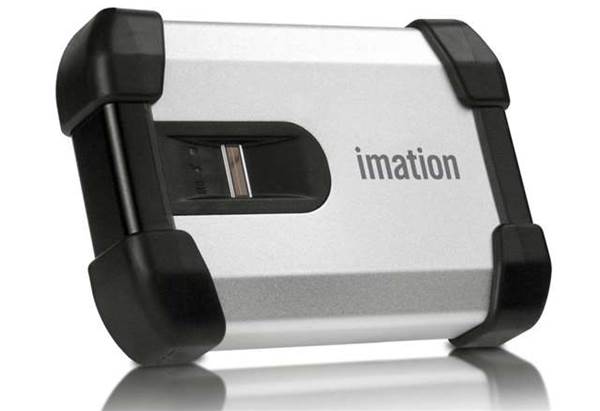 Here's an interesting gadget - the Imation H200 + Bio is an external hard drive that can be setup so that you have to swipe a finger on it to unlock the data inside.
We've all seen stories about people working in the diplomatic or intelligence communities leaving storage devices or even computers in bars, taxis or trains.
Newsletter Signup

I have read and accept the privacy policy and terms and conditions and by submitting my email address I agree to receive the Business IT newsletter and receive special offers on behalf of Business IT, nextmedia and its valued partners. We will not share your details with third parties.
While small businesses don't usually deal with state secrets, they do have a responsibility to keep customer data securely even if those customers number in the dozens or hundreds rather than millions.

If taking a external hard drive home is part of your backup regime, you have three main options.

The way the Imation H200 + Bio does this is by presenting two partitions.
The first is unencrypted and contains support software (called ACCESS) that runs directly from the drive with no installation, and the second stores the encrypted data.
The nifty thing about the device is that the encrypted partition can be unlocked by swiping a finger across the integrated reader, by entering a password, or by using both these mechanisms.
While we aren't qualified to assess the strength of the H200 from a security perspective, we did find it convenient to use.
Two or more fingers can be enrolled per user, and providing the drive was positioned to allow a comfortable swipe it correctly recognised enrolled fingers every time and never accepted a non-enrolled finger. This was with the default '1 in 4,500' setting for the reader.
Some forethought is required as you need to determine in advance how many people will share the device and allocate the space appropriately.
By default, the software divides the space equally among the users, but you can override that, potentially taking up all the remaining space.
The allocation is not dynamic, so you need to balance the likelihood of an extra person needing to use the device against the possibility of wasting space that somebody would have been able to use.
Even if some space remains unallocated, you can't add users beyond the number set during initial configuration without wiping the device and starting from scratch.
For the benefit of larger organisations, the drive can also be managed from McAfee's ePO systems management software or from the enterprise edition of Imation's ACCESS software (with features include reporting, remote erasure, and Active Directory integration).
The unit includes a double-headed USB cable to cope with computers that would otherwise provide insufficient power.
The specification sheet doesn't mention the required current, but the drive worked from a single built-in USB port on both the desktop computers we tried.
The H200 is available in a range of models starting at $321 (prices mentioned here exclude GST); we tested the $577 1TB version.
For those with smaller secure storage needs, Imation also has a range of encrypted flash drives starting at $136.
Verdict
This James Bond-like Imation hard drive requires a fingerprint swipe to unlock the encrypted data.
Overall
Specs
1TB version $577 AUD excluding GST
(pricing info)
Copyright © BIT (Business IT). All rights reserved.
Tags:
drive encryption external fingerprint hard hardware imation security
By Daniel James
Dec 12 2012
12:47PM