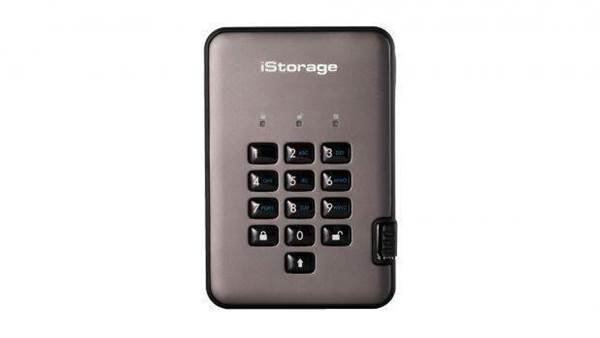 Do you carry around sensitive data? This portable hard drive offers multi-layer security.

External hard drives are still the best way to transport large amounts of data wherever you go, but security is a big issue. Lose or have a drive stolen, and all of your precious data is available to a thief.

Using software encryption is one option, but it makes an external drive less flexible, as you have to run an application on every device you connect to. Fortunately, iStorage has an alternative, baking in hardware encryption to the oddly-named diskAshur Pro2.

From the outside, the diskAshur Pro2 looks much like any other portable hard drive. It has a captive USB cable, which clips neatly into the side of the drive. While this is good for neatness, the captive cable means you can't replace it should it or the USB connector get damaged. There's a neat carrying case in the box, too.

The main external difference between the diskAshur Pro2 and a traditional USB hard drive is the numeric keypad on the front. When you plug the drive into a USB port, you have to first enter the PIN and hit the unlock button before the drive can be recognised and used by Windows. This level of protection stops the drive from being stolen, connected to a computer and your data being removed.

The second tier of protection is added by the hardware encryption. All data saved to the diskAshur Pro2 is encrypted using 256-bit AES encryption, performed by an encryption module certified to the FIPS 140-2 standard. In more simple terms, the diskAshur Pro2 meets US government security standards. Even if the hard drive was stolen, opened up and plugged directly into another computer, the drive would be completely unreadable, and your data would remain safe.

To prevent the internal components being attacked directly, iStorage has covered all components in the drive with an epoxy resin. Trying to remove any components is practically impossible without damaging them.

Still, the main threat is likely to come from someone trying to guess your PIN. To protect against this, the diskAshur allows 10 PIN attempts before partially locking the drive; after this, you have to hold the Shift key down for the next five attempts. Should the wrong PIN be entered 15 times, the drive is wiped and can be factory reset to be used again.

As the diskAshur Pro2 comes with a default PIN, you'll want to change this immediately, using the detailed instructions in the manual. There are three PINs supported for the drive: Admin, User and Self-destruct.

With the admin PIN, you can change settings on the drive, such as performing a factory reset. The User PIN just provides access to the drive, and is disabled by default. Self-destruct isn't quite Mission Impossible: rather than exploding the drive, if the Self-destruct PIN is entered, all data is securely wiped and the drive is unlocked. You'll want to be careful with this mode to avoid any accidents.

All of this protection comes without any hassle. Plug the diskAshur Pro2 into any computer, enter the PIN, and it acts just like any other bit of removable storage. At this point, performance of the drive becomes very important.

We tested the 500GB model with a hard disk drive, although there are faster SSD versions if you prefer. iStorage has used a USB 3.1 connection, although that's a little wasted on the HDD drive, as it's clearly not fast enough to use this channel.

In our tests, we measured the drive as able to read huge files at 110.17MB/s and write them at 109.56MB/s. Large files came in with a read speed of 107.84MB/s and a write speed of 109.01MB/s. Small files, which are more taxing to deal with, requiring a lot of operations and head movements, were read at a high 108.29MB/s, but write speeds suffered at 55.44MB/s. Even so, this kind of performance is decent for an external mechanical hard disk.

Using an SSD model would obviously significantly improve these scores.

If you want absolute security for your portable data, the iStorage DiskAshur Pro2 is a fantastic product with decent performance. If the high price is putting you off, a regular external hard disk and software encryption isn’t quite as secure, but a good alternative if you're not carrying super-sensitive data with you.