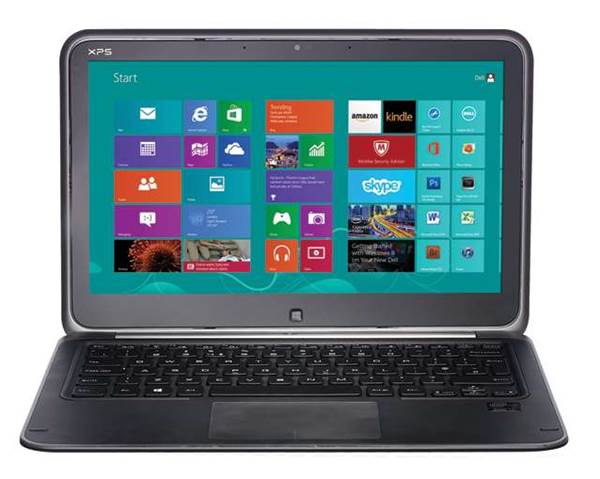 Windows 8 ushered in a wave of weird and wonderful hybrid devices, and Dell’s XPS 12 was one of the most flamboyant. Drawing on the designs of Dell’s XPS Ultrabooks and high-end laptops, the XPS 12 took the flip-twist screen of the Inspiron Duo, improved the specification and cranked up the bling factor. Now, Dell has added an Intel Haswell processor and accompanying hardware.
Nothing has changed about the chassis, and thank goodness for that – the original was lovely looking hardware. The base is moulded from a single piece of carbon fibre, and another plate protects the back of the 12.5in touchscreen. Chamfered strips of metal run around the edges, and the backlit keyboard is surrounded by soft-touch, matte-black plastic.
Newsletter Signup

I have read and accept the privacy policy and terms and conditions and by submitting my email address I agree to receive the Business IT newsletter and receive special offers on behalf of Business IT, nextmedia and its valued partners. We will not share your details with third parties.
The flip-twist mechanism works beautifully. Tilt back the lid and the XPS 12 masquerades as a compact Ultrabook, with a spacious keyboard and a large, responsive touchpad; firmly prod the upper part of the display and magnetic latches hidden around the metal frame give way, allowing the screen to pirouette 180 degrees. The display can then be flattened into tablet mode, or angled for movie viewing and web surfing.
It’s a little thick by Ultrabook standards – including the rubber feet, it measures 22mm thick. Compared to the pared-down Sony VAIO Pro 13, it feels slightly leaden, too, weighing 1.51kg. All the same, it feels rock-solid – there’s no mistaking this for anything but a top-flight portable.
Inside, an Ivy Bridge processor has been replaced by a 1.9GHz Core i7-4500U CPU. There’s 8GB of the latest DDR3L-RS RAM and a 256GB Lite-On SSD, which results in a hybrid that feels as quick as its rivals. The SSD takes much of the credit here: in the AS SSD benchmark, it read large files at an average of 476MB/sec and wrote them at 399MB/sec, which translates to nippy boot times and fast application load times.
When it comes to application performance, the Core i7 Haswell CPU isn’t faster than the previous generation. A result of 0.68 in our Real World Benchmarks is ample for most tasks, but it isn’t blazingly quick. Gaming performance is similar to the last generation, too: the Intel HD Graphics 4400 chipset managed a mediocre average of 52fps in our easiest Crysis benchmark.
Haswell comes into its own when you dim the screen and unplug from the mains. In our light-use test, with brightness set to 75cd/m2 and Wi-Fi off, the XPS 12 lasted 12hrs 41mins. That’s more than five-and-a-half hours longer than the previous model, and almost an hour longer than the longest-lasting Haswell laptop we’ve seen so far, Apple’s MacBook Air.
The 12.5in, Full HD touchscreen is truly gorgeous to behold and a joy to use – even if it lacks the active stylus support of rivals such as Sony’s VAIO Duo 13 – and image quality is good. Brightness peaks at 385cd/m2, which is readable outdoors, and a contrast ratio of 820:1 ensures movies and images look lifelike. Colour reproduction is rich and lively, although there’s room for improvement: the panel doesn’t cover the full sRGB gamut, and the darkest greys are crushed into black.
As before, connectors are limited to two USB 3 ports, a mini-DisplayPort and a 3.5mm headset jack. There’s still no Ethernet, but Dell has upgraded the XPS 12 to Intel’s brand new dual-band, 2x2-stream AC 7260 chipset, supporting 802.11ac transfer rates of up to 867Mbits/sec. Bluetooth 4 makes the grade, too, and is accompanied by an NFC reader in the right-hand side of the wristrest. We’d have liked to see an SD card reader, however.
You can find small faults with the XPS, but it oozes quality. It provides a workable halfway house between compact Ultrabook and chunky tablet. We wonder how long the hinge mechanism will last under everyday use, but with soaring battery life and a gorgeous design, the Dell XPS 12 is better than ever.
Verdict
Dell upgrades its XPS 12 with a Haswell processor - the result is a sumptuous, long-lasting hybrid.
Performance
Features & Design
Value for Money
Overall
Specs
$1999 AUD
(pricing info)
Copyright © PC Pro, Dennis Publishing
Copyright © PC Authority, nextmedia
Tags:
12 dell hardware review xps
By Sasha Muller
Dec 4 2013
11:50AM