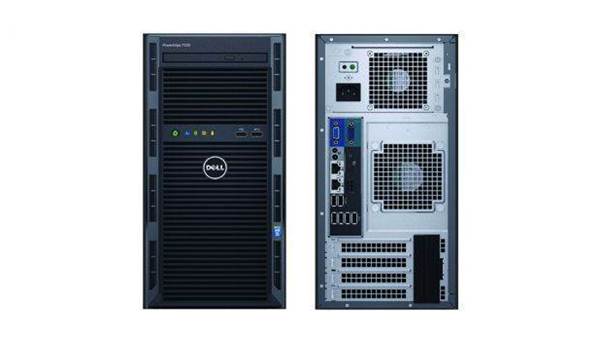 Whichever spec you opt for, the T130 is solidly built, and its side panel can be padlocked shut to protect against wandering fingers. There’s a heap of USB 2 and USB 3 ports for conveniently adding external devices, but these can be disabled from the BIOS if security is a concern.

Inside the chassis, there’s room for up to four large-form-factor (LFF) hard disks, with dual drive bays at the top and bottom of the chassis. Both upper and lower drive bays are cabled to the motherboard’s embedded four-port SATA connector. The base model comes with one 1TB SATA drive.

Dell’s LifeCycle Controller makes light work of OS deployment. After hitting F10 during boot-up, we chose Windows Server from the menu and had it loaded in 20 minutes. Remote management is included too, which will please businesses wanting to deploy the T130 in remote or branch offices. The system comes with an iDRAC8 controller that shares access with either of the server’s two embedded Gigabit ports.

From its tidy web interface we were able to monitor critical components, control power remotely, and reboot the server. For OS remote control and virtual media support, you’ll need an extra $743 for an Enterprise licence.

You get Dell’s free OpenManage Server Administrator (OMSA), too, which provides local web-based server monitoring. OpenManage Essentials (OME) delivers automated network discoveries and centralised management of SNMP- and WMI-enabled systems. Support staff on the go will particularly like the OpenManage Mobile (OMM) iOS app. After installing it on our iPad, we were able to link up with the server’s iDRAC8 controller and OME host, and view health status, alerts and system logs directly on the tablet.

The PowerEdge T130 packs a lot into its compact chassis, and it won’t disturb you in a small office: at 1m away we recorded a noise level of only 37.9dB. Power usage is low too, with the server consuming 37W with its OS in idle and peaking at 71W under extreme load.