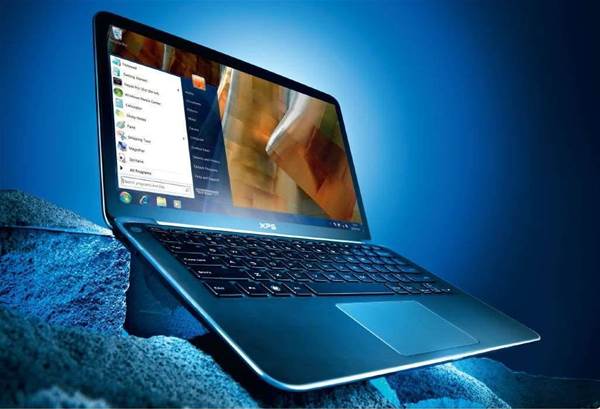 The email told us Dell was coming to show us something special. That we had to sign a non-disclosure agreement if we wanted in. A day later, that something turned out to be an early sample of the XPS 13, Dell’s long-awaited addition to its premium laptop range and, more importantly, its very first Ultrabook.

The XPS 13 bears no design homage to Apple’s range, nor even to any laptop in Dell’s history. The lid is finished in a light shade of brushed metal – the traditional, if unofficial, uniform of the Ultrabook – and the dark base beneath adds a touch of contrast. A weave of carbon fibre stretches all around the metal XPS tag at its centre, itself engraved with Windows and Intel logos.

Inside, the Dell is entirely understated. Matte-black plastic pools around the keyboard and wristrest, encompassed by a flash of metal, and the soft-touch plastics feel silky smooth. It’s physically compact too. Dell claims the XPS 13 squeezes a 13.3in display into a 12in chassis, and while it isn’t quite as small as Asus’ Zenbook UX21, it’s much more compact than its 13.3in competitors.

I have read and accept the privacy policy and terms and conditions and by submitting my email address I agree to receive the Business IT newsletter and receive special offers on behalf of Business IT, nextmedia and its valued partners. We will not share your details with third parties.
The usual Intel and Windows stickers are conspicuous by their absence, replaced instead by an engraved dog tag on the XPS 13’s carbon-fibre underside

At 1.38kg, the XPS 13 can hardly be accused of being overweight; yet, somehow, it feels heavier than its counterparts. Indeed, more than one of the PC & Tech Authority team remarked at its heft. Whether it’s the way the weight is distributed across the chassis, or perhaps the soft-to-the-touch yet rigid feel of the carbon fibre base, this is a solid-feeling laptop.

Despite the relatively dainty dimensions, the XPS 13 sacrifices nothing in the way of comfort. The keyboard is wonderful, the slight dip in the centre of each key combining with a crisp action that makes for quick, confident typing. It’s backlit, too – a keyboard shortcut flicking between two brightness levels, or turning it off completely. It’s easily the best keyboard of any laptop here, and that includes the Apple models.

1. With two levelsof backlighting, anda gloriously comfyset of keys, the Dell’skeyboard is the bestof the bunch.2. The wristrest is afingerprint magnet, butthe soft-touch plasticfeels lovely

The touchpad doesn’t quite scale the heights of the keyboard. It occasionally requires a firm tap to get a response, and we missed the ability to use two-fingered taps to emulate a right-click. As with most of its rivals, the multitouch functions also seem a bit tacked on – there’s still no getting away from the fact that Windows just isn’t as gesture-friendly as OS X. It’s by no means bad, though, and the glass surface feels great under the finger, delivering accurate cursor control, and the whole pad gives way with a solid, reassuring click.

Whether it’s kicking back with a movie, or churning through a demanding video edit, the XPS 13 delivers sterling performance. Our review model boasted the top-end Core i7 processor alongside Samsung’s newest 256GB SSD, the PM830. It’s a potent pairing, with the Dell’s result of 0.62 in our benchmarks soaring to a joint first place with Asus’ Zenbook UX31. With light-use battery life extending to 8hrs 11mins, the Dell is only a whisker behind Asus’ Zenbook UX31.

The SSD is lightning-quick as well: with a sequential read speed of 474MB/ sec and write speeds of 259MB/sec, the XPS 13 wakes from sleep in less than two seconds, and loads multiple applications in a blink of an eye.

In a field of middling display quality, the XPS 13’s screen stands out. A protective layer of Gorilla Glass stretches across the 13.3in, 1366 x 768 panel, and the backlight reaches a bright 296cd/m2. Colour accuracy is acceptable, and we noted none of the bluish tinting or washed-out effect that the other Ultrabooks exhibited.

There’s still ample room for improvement, however. The 220:1 contrast ratio may put the Dell among the better models on test, but it still leaves the panel struggling to pull out detail in darker scenes, with the greyish blacks obscuring fine detail. The narrow vertical viewing angles are also a little disappointing, and left us tilting the display back and forth to get it just right.

The audio is very easy on the ears. Waves’ MaxxAudio sound-enhancing feature transforms the Dell’s lightweight sound into a reasonably crisp, full-bodied performance, and the variety of preset modes makes it easy to tweak the sound quality to suit the source at hand, whether it be music, movie or only an audiobook. It’s easily the match of any laptop in this month’s Labs.

The final hurdle for the XPS 13 is connectivity. With only one USB 2 port, one USB 3 port, mini-DisplayPort and a single 3.5mm jack for headphone and microphone duties, the Dell is clearly no match for the likes of Toshiba’s businesslike Portégé Z830.

The sensibly spaced ports prevent wide thumb drives getting in the way, and the two-tone design looks simply gorgeous

The absence of an Ethernet socket (or even a supplied adapter) is softened by the presence of Intel’s Advanced-N 6230 wireless chipset. With dual-band 802.11n wireless supported as standard, and Bluetooth 3 thrown in for good measure, the Dell is capable of nippy wireless networking. The addition of a GPS sensor is novel, too, even if we’d much rather have a 3G radio in its place.

We tested an early production sample of the Dell XPS 13, so there’s a chance the specification may have changed slightly by the time you read this review, but aside from an improved screen, a tweak here or there isn’t likely to change our opinion. It’s attractive, built superbly, and the keyboard is an absolute joy. A bigger problem concerns the price. At the time of going to press, Dell was unable to give us official pricing for the XPS 13, which means we’ve had to demote it from Labs Winner to Recommended. Make no mistake, though, if it’s cheaper than the UX31, we’d restore its status in a heartbeat.

Verdict
Classy, understated and brimming with potential, Dell has conjured up an industry-leading Ultrabook with its XPS 13.
Performance
Battery Life
Features & Design
Overall