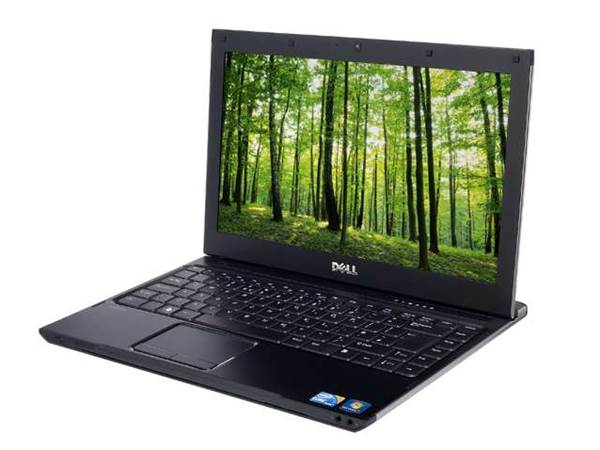 Dell’s answer to the MacBook is its latest beauty: the Vostro V130. It’s flat, gently curved at the sides, and measures only 20.5mm thick. The lid opens on a hinge set an inch or so from the rear edge, giving it a neat, angular look when sat on a desk. Best of all, it weighs just 1.66kg. There are no ports or sockets around the sides, bar a single memory card slot. Instead, on the rear you’ll find D-SUB and HDMI outputs, Gigabit Ethernet, two USB ports and a USB/ eSATA combo port.

The keyboard exhibits no such compromise, with large keys all-round. Key travel is shallow, but it’s comfortable to use, and the multitouch touchpad and buttons are responsive. There’s no security extras such as fingerprint readers and TPM chips, however.

The 13.3in screen sports the usual 1366 x 768 resolution and its white-LED backlight is even and keeps things nice and bright. Thankfully, it isn’t glossy, so you won’t have to worry about distracting reflections from office lights. The lid feels strong, as does the base, and the hinge has enough stiffness to stay put when you’re moving it about.

Dell has chosen one of Intel’s low-voltage processors, so the Vostro V130 props up the performance table: the dual-core 1.33GHz Core i5-470UM combined with 4GB of DDR3 for a benchmark score of 1.06. Add to this the 802.11n Wi-Fi and Bluetooth 3, a 2-megapixel webcam above the screen, and the option of Windows 7 Professional, and the Vostro V130 holds its own as a business laptop.

There’s a significant problem, though. In our light-use battery test, the Vostro V130 held on for a mere 3hrs 55mins. Worse, the sealed, Apple-esque chassis means you can’t upgrade the battery. That’s a blow to its business credibility, and it’s a shame because we like the Vostro V130. It’s a joy to use, very customisable, and its looks are up there with the best of them.