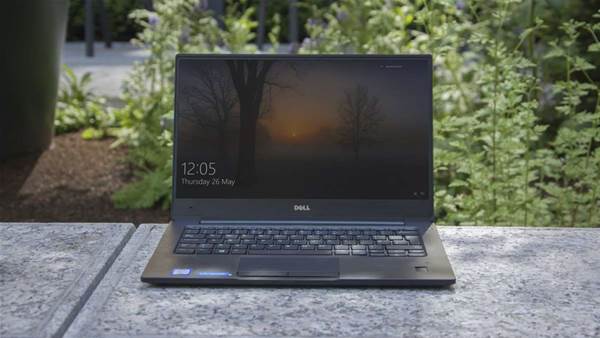 It's pricey, but the Latitude 7000 is a tough, beautifully made, feature-rich business ultraportable.

Somewhere deep inside Dell's R&D labs, white-coated workers have toiled day and night to splice the DNA of Dell's Latitude range of business laptops and its XPS family for consumers. The fruit of those labours is one of the finest business ultraportables to ever see the light of day: the new Dell Latitude 7000.

As a starting point, you really couldn't ask for any better: the XPS 13 is an Ultrabook to aspire to. It's fast, light, beautiful and well-equipped in every way. The Latitude 7000 takes those strengths and moulds them into a more business-friendly form.

It gets off to a great start. The base is cast from perfectly smooth, gently rounded plates of carbon fibre while the silver metal lid of the XPS 13 has been exchanged for a less ostentatious charcoal-coloured sheet. The build quality is stupendously good. Pick it up, twist it, abuse it and you'll get nowhere: the slender lid barely budges more than a couple of millimetres, and the base only flexes to and fro once you start to exert the kind of force which would snap a lesser device. Dell says the Latitude 7000 is strong enough to survive the barrage of military-grade MIL-STD 810G tests.

For a 13-inch laptop, the Latitude 7000 is unusually tiny. It's easy to see how Dell's done it, however: the ‘InfinityEdge’ display has a bezel no more than a few millimetres wide. Short of getting rid of the bezels entirely, which is sadly not yet a possibility with current technology, Dell couldn't have made the Latitude 7000 any smaller. It's also light. At 1.12kg, it's lighter than any 13in business laptop that we've seen. 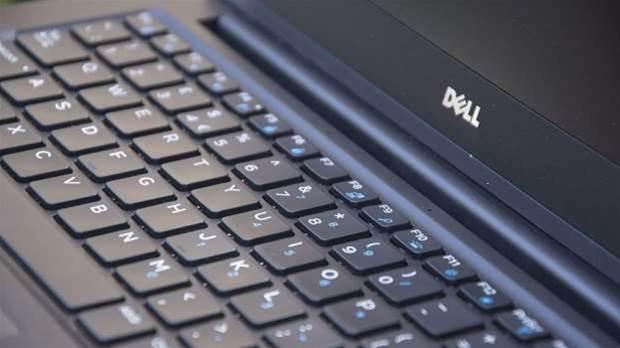 Thankfully, this shrinking process hasn't led to any major compromises. In fact, it really doesn't seem to have had any impact at all. The keyboard is a touch small, but you won't be able to tell in everyday use. The Scrabble-tile keys have just enough scoop in them to grip the finger, and the feel is superlative, every key dipping down with a delicate, light action. And if you're the type that curses the fashion for touchpads with integrated buttons, you may now rejoice freely: the Dell's touchpad has two separate buttons, which your work colleagues will be pleased to hear, are absolutely silent.

If you ruled out the XPS 13 because of its glossy screen, then Dell's decision to equip the Latitude 7000 with a matte anti-glare coating will be a definite plus. Most of the pre-configured models come with a perfectly adequate Full HD display, but the top-of-the-range model features a QHD+ (3,200 x 1,800-pixel) touchscreen, not to mention the fastest available Core m7 and a larger 43Wh battery.

The Full HD display on the model we reviewed is fine, if not especially impressive. Purists will rightly gripe about the dynamic contrast, and if colour accuracy is important to you, it's a significant downside. In addition, the anti-glare coating does tend to make images look a touch soft, and colours do lack a little punch and vibrancy, although the peak brightness and contrast ratio are quite decent. The overall quality is good enough for everyday office applications, but if you've spent time with the XPS 13's ultra-high-resolution display, or any of Apple's Retina displays, you're likely to be underwhelmed – in which case the high-model with QHD+ screen might be worth considering.

Where the Latitude 7000 deviates from its XPS-branded sibling is that it's powered by Intel's low-voltage Core M processors. This isn't the shortcoming you might imagine; in most situations you're unlikely to notice the difference between these and Dell's Core i laptops.

Unless you subject your work laptop to heavy, extended workloads – like virtualisation or video editing – the Core M's ability to crank up the clock speed to deliver brief surges of power is the perfect compromise between performance and battery-friendly power consumption.

Dell sent us the Full HD version with Core m5 and NVMe SSD for review, and it put in a very decent performance. In our benchmark tests it scored exactly what we'd expect from a Core m5 device.

As expected, the Latitude 7000 couldn’t compete with Core i7-equipped Dell XPS 13 under stress – falling 35% to 40% behind in video transcoding and image processing tests, and 85% behind in the multitasking benchmarks.

That might sound like a big margin, but in reality, the super-quick NVMe SSD does a great job of masking the processor's shortcomings. It was only once we started Photoshop CC churning through some heavyweight filters that we began to miss the Core i7 processor in the XPS 13. 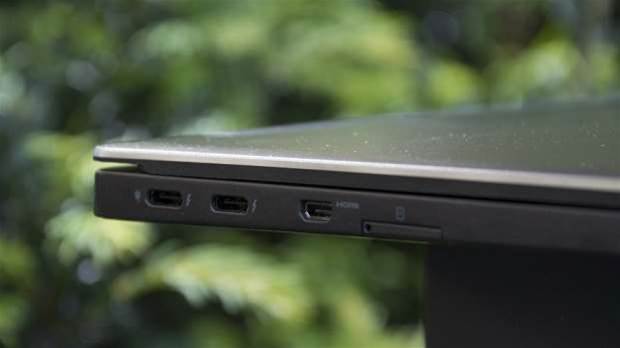 Battery life isn't astonishingly good, but it is good enough to last most of a working day. The Latitude 7000 lasted 7 hours 6 minutes in our video rundown test, which is 52 minutes less than the XPS 13. However, given that the XPS 13's battery is nearly 70% larger, it's actually quite impressive, and a pretty good indicator of just how efficient those Core M processors are. Don’t expect the model with QHD+ display to last this long though.

Dell's done a great job of covering the connectivity and security side of things. The Intel Wireless-AC 8260 chip provides 802.11ac Wi-Fi as well as Bluetooth 4.2 and NFC, and there’s also a micro SIM card slot for 4G connectivity.

The 7000 includes a full-sized USB 3 port, two USB Type-C ports – both of which are Thunderbolt 3 capable – as well as micro-HDMI and a microSD slot. 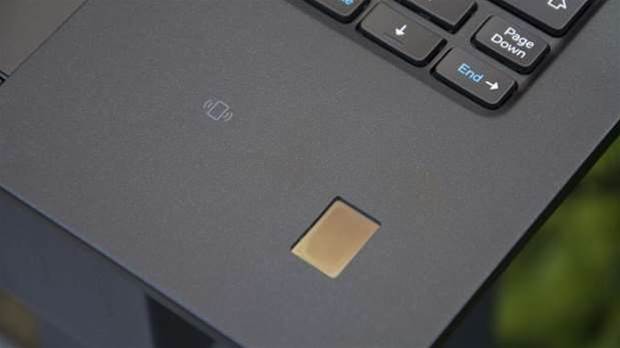 The Dell Latitude 7000 is a superb business ultraportable, but there is one stumbling block – its price. When the starting price is $4,605.70, you’re definitely in business class (if not first class) territory. And as we’d strongly recommend getting the 256GB high-performance NVMe SSD, that takes the price to $4,731.10. With the QHD+ touch display and Core M7 processor, the price balloons to $5,549.51.

But what you’re getting with the Latitude 7000 is a beautifully made business ultraportable that’s an almost perfect blend of portability, toughness and features – along with a three-year on-site warranty.