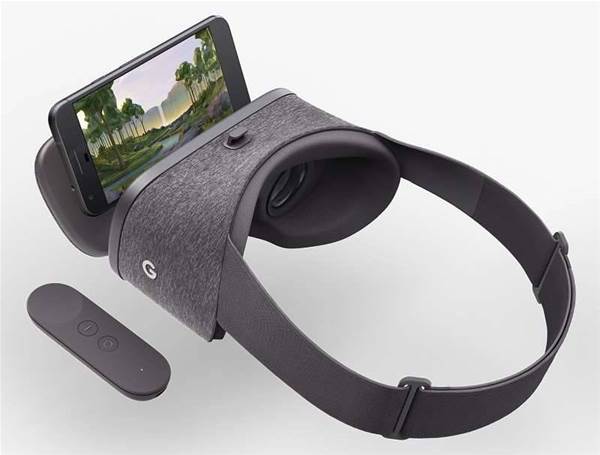 Google’s headset isn’t just a phone accessory – it has the potential to redefine how we use virtual reality for business and pleasure.

Daydream is the perfect name for Google’s fabric-coated VR headset. It’s actually a good word to capture the entirety of virtual reality, or at least the version peddling itself as an accessible entry point, where phones are slipped into plastic cases and strapped to heads. If cinemas are dark, lucid spaces for dreaming, then Google’s Daydream View is a place for forays into reverie – where you forget, if only for a moment, when and where and who you are.

But how good is the new VR headset? Here we review the Daydream View as part of our gift guide series.

With a reasonable $119 price tag and an easy-to-use setup, the Daydream View could be an ideal gift for those with a compatible phone (see below). But as more Daydream-capable smartphones are released – seamlessly integrating with content such as YouTube’s library of 360-degree videos – it could well redefine smartphone-based VR.

The entertainment benefits are pretty obvious, but there are plenty of potential for business applications as well.

Google’s main competitor here is the Samsung Gear VR. Like that headset, the Daydream View is essentially a pair of fancy goggles for housing a high-resolution smartphone. There’s nothing in the way of wires or sensors, and Google leans into this simplicity with a design aesthetic that’s more about squishy cloth than shiny plastic. 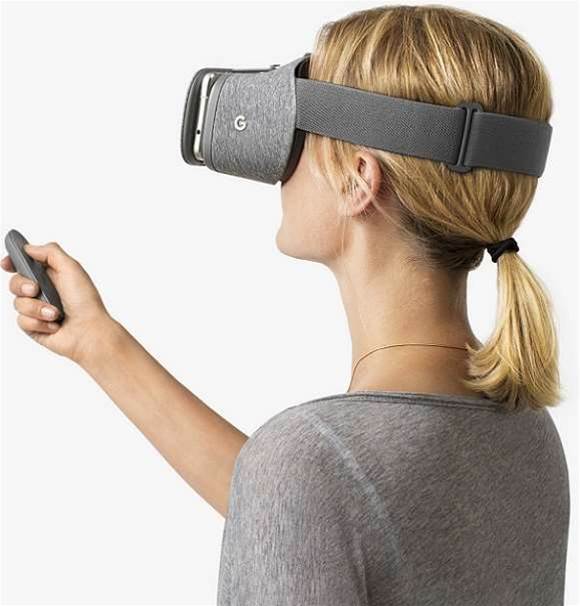 The casing of the headset comes in one of three colours – Slate, Snow or Crimson – although only the first will be available at launch. The soft fabric shell and curved shape give the Daydream View a cosy appearance, although the casing does look a bit like someone has taken a pair of scissors to a Topman T-shirt. It remains an unpretentiously handsome device, however, and this use of textile lends the headset a pleasing tactility.

Attached to your face, the Daydream View feels comfortable and lightweight. A squishy microfibre face mask lines the area that’s pressed against your forehead, and there’s a cavity for the viewer’s nose. The bottom lining could, however, have been designed to push tighter against the nose and cheeks. We found there to be an irritating gap where light and dust could get in. This wasn’t noticeable when playing in low-light spaces, but it occasionally broke the sense of immersion when using the Daydream View during the day.

The headset’s strap is angled to clasp around the top part of its user’s head, and it can be easily tightened or loosened using buckles on either side. There isn’t a top strap to stop the Daydream View from slumping down over time, but the headset with smartphone ensconced is light enough for this not to be an issue. The lack of top strap also means you can use the Daydream View with, say, a topknot or Mohawk – if that happens to be a clincher for you.

Unlike the Gear VR, the Daydream View has no focus-adjustment dial. Configuring your view is more a task of fiddling the headset’s position on your forehead until the image becomes clear. This worked fine for me, although it may be worth trying out the Daydream View before buying it, if only to check that the focus works for your vision.

We tried the Daydream View with Google’s 5.5in Pixel XL handset, but the VR device also works with the standard Pixel, and will eventually be compatible with a host of Android phones.

The Lenovo Moto Z is among the first non-Google smartphones to work with Daydream, and this breadth of compatibility will give the Daydream View a major leg up over the Gear VR, which is limited to Samsung’s own devices.

Whereas Samsung’s Gear VR has panels that slot and click into place, the Daydream View’s phone-holder sandwiches the handset between capacitive rubberised nubs, fastened with an elastic latch. This was enough to keep our Google Pixel XL secure during our time with the headset, although we’d worry that repeated wear and tear would weaken the elastic hook.

The nubs let the phone know where it’s positioned in the headset, removing the need to precisely sandwich your phone as was the case with Google’s Cardboard. The bottom hinge on the panel also slides out on spring-loaded arms, accommodating phones of different sizes or those with cases. An embedded NFC chip automatically switches the phone to Daydream mode when placed on the headset’s panel, and while I had one or two instances of the phone not properly segueing into Daydream mode, the setup process is so quick that it wasn’t an issue to take out the handset and manually enter the app.

When using Daydream, the screen is smooth and reactive, with low latency and nothing too overpowering in the way of motion blur. We shook our heads pretty violently to try and make the phone stutter, but didn’t feel motion-sick in the slightest when using it. As with the Gear VR, however, we did find that our eyes grew tired after using the headset for prolonged periods of time.

While Google has bucked against the Gear VR in a very obvious way with its design decisions, the real game-changer in the Daydream View is its inclusion of a separate, movement-sensing controller.

This small, pill-shaped device continues Google’s stripped-back approach to VR, having only a clickable touchpad and two menu buttons, plus volume controls on its side. 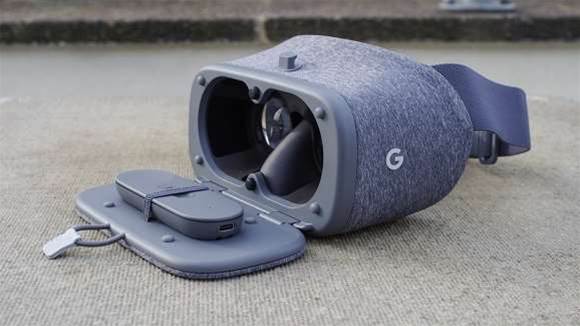 It connects with your smartphone via Bluetooth, and has internal sensors so it can tell where it’s pointed. There’s no external spatial à la the Oculus Rift, HTC Vive and PlayStation VR, but the Daydream View controller can pick up directional shifts in movement. The result is a system that’s more about wrist movements than expansive sweeps of the arm, with the controller used to point at menus and objects as opposed to reaching out and interacting with items in the virtual space.

Compared with the Gear VR’s headset-based control buttons – which mean you have to press the side of your head to interact with things – the Daydream View’s controller is far more comfortable to use. The experience is much like using a computer mouse, but for virtual reality, and the directional sensors work well in conjunction with the trackpad. We did find ourselves having to re-centre the camera to keep our gaze lined up with the pointer, but this is done by simply holding down one of the buttons. Annoyingly, the fact that this is the same button used to exit apps means you can accidentally ended up back on the homescreen.

There’s a wrist strap included with the Daydream View, which can be used to prevent the controller from crashing into friends and family if it flies out of your grip. There’s also a handy niche in the headset’s panel — an ideal place to store the controller when you’re not using it.

Google’s Daydream interface doesn’t diverge drastically from Samsung’s Gear VR. Similarly, it’s built from square panels floating against a pleasant, animated scene. There’s no real need for Google to opt for a different design, as it works well and makes sense at a glance.

What is currently within those panels, however, is somewhat limited. At launch, Google only has a handful of Daydream games ready for download on Google Play. While these showcase the headset’s co-ordination with its controller, they largely lack depth. Wonderglade, for example, is a kid-friendly set of mini-games that involve the player rotating their hand to race a ball around a moveable track. Hunters Gate, meanwhile, is a top-down, Diablo-like role-playing game, which sees your character movement controlled by trackpad, and your aim controlled by pointing at enemies. Both are diverting, but there’s not much to them, and they don’t make the most of the sense of immersion VR offers.

Much more appealing is the Harry Potter tie-in Fantastic Beasts, in which you charm a number of magical creatures using movements of your controller/wand. There isn’t a great variety of actions you can perform, but the set design is lush and detailed – absorbing to explore. Also worth playing is EarthShape, in which you travel to terraform alien planets via a grid-based mini-game. Again, the action is far from fast-paced, but the gameplay is meditative and the writing has character.

Aside from games, Daydream is slated to host content from The New York Times, The Wall Street Journal, the BBC and The Guardian, going to show that newspapers and broadcasters are leading the charge when it comes to interesting uses of VR. Another thing in its favour is its integration with YouTube, making the Daydream View an open gateway into a whole world of user-generated 360-degree films. 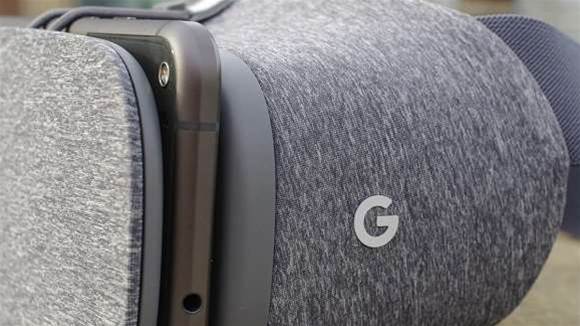 More experiences for the Daydream will inevitably arrive in the next few months, but it is important that Google pushes games and films that go further than novelty in engaging with the idea of immersion. There’s a lot of scope for developers and directors to do interesting things with VR, and Daydream’s accessibility could make it a perfect platform for sophisticated projects that aim for a wider audience than early adopters of the HTC Vive and PlayStation VR.

With the Cardboard, Google took a knowingly anti-tech approach to VR, and this attitude continues with a headset that feels more like an item of clothing than a holster for expensive hardware. It works. The Daydream View makes pivoting into virtual reality feel smooth and intuitive, and using it is greatly helped by a responsive controller.

Aside from the current dearth of content to use with it, the Daydream is well positioned to seize the ground established by Samsung’s Gear VR. It could do more than this, potentially redefining what we think of when we talk about smartphone-based virtual reality.

Take a handful of partnerships with broadcasters, coupled with YouTube integration, and Google’s affordable, cushiony headset could end up being the go-to piece of kit for day-to-day virtual reality. Does the Daydream View signal the beginning of a new era? It could well do.