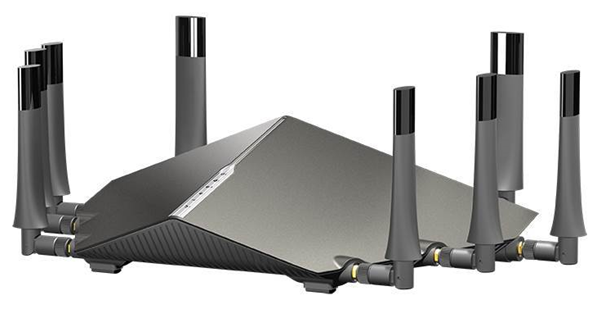 Want to boost Wi-Fi coverage without resorting to a mesh system? D-Link's new modem/router should be on your shortlist.

Wi-Fi coverage throughout a house or small business premises can be a problem. If a single router in the most convenient location doesn't do the job, solutions can include getting an electrician or other qualified person to change the wiring so the router can be moved to a central position, using Ethernet cabling or powerline adaptors so that a second access point (often a router in bridge mode) can be added.

Another option is to install mesh routers such as the TP-Link Deco M5, Google Wifi, Linksys Velop and Netgear Orbi which we have reviewed elsewhere.

But there is another way: install a better router – and the D-Link Cobra DSL-5300 is one such device.

We found the Cobra DSL-5300 was able to completely cover a two-storey home despite being located as far from the centre of the building as possible without going outside.

Since most people are concerned with internet speed rather than how quickly data can travel internally, we used Speedtest.net as a quick and easy measure of performance.

On a 100/40 NBN HFC service, we used an Ethernet connection as a baseline and recorded 97Mbps.

Switching the notebook to Wi-Fi gave 96Mbps, and we suspect that can be ascribed to the normal fluctuations that occur. Moving to the opposite end of the building saw a drop to 74Mbps.

Upstairs, the speeds were 77Mbps above the router, and 31Mbps at the opposite end. Dropping to 31Mbps might not sound too good, but that room is practically a dead spot – a connection is possible, but using the web is painfully slow with our regular router (a D-Link DIR-850L).

All those figures used the native Wi-Fi interface on a notebook. We had a D-Link DWA-192 AC1900 adaptor on hand, so we tried that and saw similar results with the Cobra in most locations, but an impressive 80Mbps in the 'difficult' room.

Even with 4K video streaming to a smart TV and HD video to the notebook (both on Wi-Fi), we were still able to simultaneously copy a 1GB file from a NAS appliance to the notebook in around 50 seconds.

These results seem to show that the Cobra's eight antennas, smart band selection (saving users from choosing between the 2.4Ghz and two 5GHz channels), and beamforming (technology that electronically directs the signal towards the connected devices) do pay off.

Its support for MU-MIMO (multi-user, multiple-input, multiple-output) will come into its own when more devices support this technology. Although any Wi-Fi router lets you connect multiple devices, what normally happens is that it rations its attention to one device at a time. MU-MIMO allows a router to talk simultaneously to two, three or four devices at once, reducing wait times that can cause buffering and other slowdowns.

As mentioned in the introduction, the Cobra is a modem/router. The modem side works with ADSL and VDSL, and is said to be suitable for NBN FTTN connections. For those in FTTP or HFC areas, the Cobra has a dedicated WAN port. Where some routers (such as D-Link's earlier Taipan DSL-4320L) have four Ethernet ports with one assignable as the WAN interface, all four of the Cobra's Gigabit Ethernet ports are available for LAN use. One more port doesn't sound exciting, but it can make a big difference if it saves you having to add a switch.

The Cobra also provides the features we've come to expect in consumer/small business routers, such as a guest network (to provide visitors with internet access while isolating them from your devices), a DLNA media server (one USB 3.0 port allows connection of a storage device, while a separate USB 2.0 interface supports a shared printer), and VPN support.

The QoS (quality of service) feature lets you prioritise specific devices, but only one device can be given the highest priority, with another two at the next tier (high). After that there are eight slots for medium priority, and everything else brings up the rear.

This QoS model, combined with a drag and drop interface, is simple to understand and use, but is somewhat inflexible. For example, if you want to give three devices equal-top priority then all the others have to be 'best effort'. And there doesn't seem to be a way to prioritise or deprioritise particular types of traffic such as VoIP or email.

The manual for the Cobra was still being finished at the time we tested, and we would suggest that buyers find time to read it once it is available. The setup guide is straightforward enough, but we did run into a few wrinkles that might be avoided with full documentation. For example, putting the Cobra into bridge mode looks simple enough, but for some reason the setting didn't 'take' when we clicked Save. We also expect the manual would give owners a better idea of what this modem/router is capable of than what they would get from noodling around in its web interface.

Since so many products are only guaranteed for 12 months, it's worth noting that the Cobra comes with a two-year warranty that's extended to three years if you register it online.

Apart from the $749.99 price tag, the main disadvantage of the Cobra is its size: 42x26x15cm including antennas takes up a lot of space on a shelf. It can be wall mounted, but that would probably make it even more conspicuous, especially in a home environment.

But when all's said and done, this is the first router we've tried that is able to project a decent signal right around the premises without resorting to mesh technologies, and there's real value in that, quite apart from all the other features.

Verdict
It’s not cheap, but the D-Link Cobra DSL-5300 is ideal for those who want to extend Wi-Fi coverage in their home or small business without having to resort to using mesh routers. It also offers plenty of connectivity options and features for a consumer-grade router.
Overall
Specs
$749.99 AUD
(pricing info)
• www.dlink.com.au
Router with Wave 2 tri-band 802.11ac Wi-Fi (1000Mbps on 2.4Ghz + 2 x 2167Mbps on 5GHz), with 8 high-gain antennas, MU-MIMO and Advanced AC SmartBeam; 4 Gigabit Ethernet ports, with one assignable as the WAN interface, NBN support and VDSL/ADSL modem; USB 3.0 and USB 2.0 ports.
Copyright © BIT (Business IT). All rights reserved.
Tags:
dlink hardware networking review router
By Stephen Withers
Dec 1 2017
7:31AM