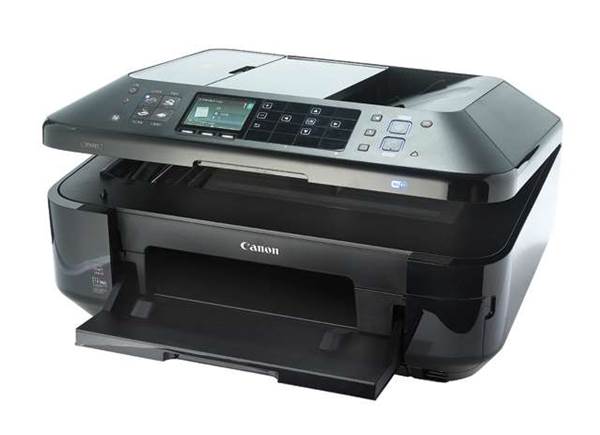 Canon’s office line finally gets the half-touch, half-display interface of its consumer siblings – of a sort.

The new flagship Pixma MX885 has a 3in screen surrounded not by touch controls this time, but by a grid of tile buttons with dynamic glowing labels. It works well, particularly when you think back to the old circular navigation buttons it replaces. Four Scan, Copy, Fax and Card buttons take you into the relevant menus, with the tiles switching to navigation controls or number pads as required.

Nothing else has changed feature-wise from the old MX870. USB, Ethernet and Wi-Fi tick all the boxes for a small office, and it has two 150-sheet input trays and a 35-sheet ADF on top. You also get an integrated duplexer.

What has changed a little is the print engine. We measured a solid 10ppm in mono, up from the MX870’s 8.8ppm, and colour speeds remain identical to the A-Listed standalone Pixma iP4850, at 6.1ppm for documents and 46 seconds for a top-quality 6 x 4in photo.

It uses the same five inks as Canon has been using in its top-end printers for some time now, so the quality is excellent. Photos are near-flawless, with deep, rich tones and no visible banding. Normal text is thick and solid, and even draft text is usable for all but the most important print jobs.

Scans are still Canon’s weakest point, although we’re now talking a small deficiency. Faint striping could be seen on some photos, but colours are perfectly acceptable.

But there’s a bigger issue. With five inks to replace (all frustratingly with slightly different capacities and costing more than $23), A4 documents will set you back 7c for mono and 21c for colour, which adds up quickly indeed.

Don’t get us wrong: the MX885 is another excellent office all-in-one. But we’re finding it increasingly difficult to justify the cost of that quality.