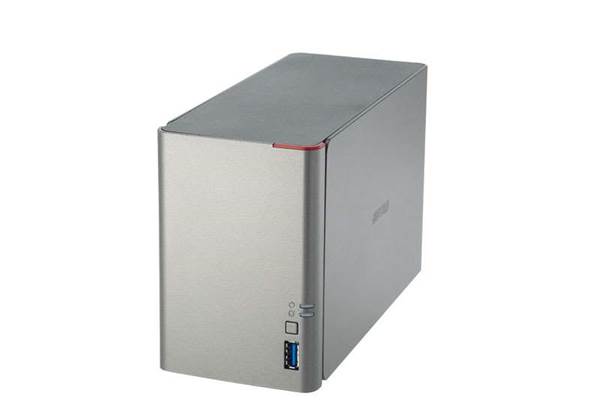 If you’re looking for a cheap and cheerful diskless NAS, Buffalo’s LinkStation 421DE has plenty going for it. First, it’s an affordable two-bay unit, and while the build quality feels cheap and plasticky, and the style is nothing special, the design is practical.
Attach the supplied rails and drives will slide into place and lock into position. The 421DE is frugal in terms of power consumption, using only 16W at full pelt, and reasonably quiet while running. It even has a USB 3 port at the front to go with the USB 2 at the rear.
Newsletter Signup

I have read and accept the privacy policy and terms and conditions and by submitting my email address I agree to receive the Business IT newsletter and receive special offers on behalf of Business IT, nextmedia and its valued partners. We will not share your details with third parties.
Setup via Buffalo’s LinkStation software is fairly easy. By default, drives are configured in a RAID0 formation, but it’s easy to change that if you need RAID1 protection, and it’s no problem to map shared folders to a Windows drive for ease of access. The browser-based UI isn’t the most user-friendly, but the different options are sorted in a logical manner, and you can install add-on packages from a reasonably extensive range.
The specification – a 1.2GHz ARM processor and 512MB of RAM – is good for a budget NAS, and performance is impressive. With dual 1TB Seagate drives installed, average read speeds were 102MB/sec in our large-file test. However, write speeds reached only 54MB/sec with the same large files, and our backup test crawled along at 48MB/sec: the ARM processor struggled to handle so many smaller files.
Cloud features disappoint. You can access files and folders online, but the interface has all the style and usability of a router control panel, and there are no Dropbox-style sync options. Apps offering similar functions are available for Android and iOS, but they’re basic. We also found the 421DE slow while browsing or streaming media from the DLNA server.
If you’re looking for a cheap home or small-business NAS with the option to access files remotely, the LinkStation is worth a look, but it doesn’t cut the mustard as the basis for a personal cloud.
Verdict
A decent budget home NAS, but a poor selection of cloud features means it falls short.
Performance
Features & Design
Value for Money
Overall
Specs
$199 AUD
(pricing info)
Copyright © PC Pro, Dennis Publishing
Copyright © PC Authority, nextmedia
Tags:
421de buffalo hardware linkstation
By Staff Writers
May 15 2014
4:27PM