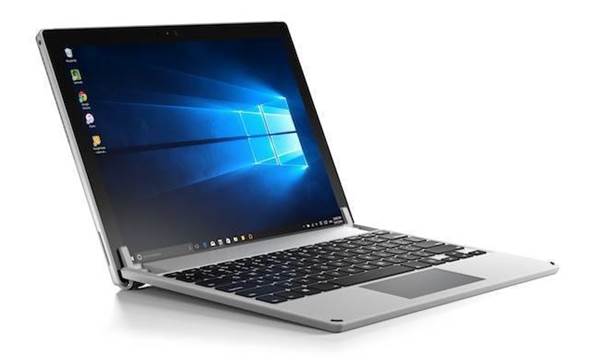 There's no need for a kickstand when you attach this high-quality keyboard for Surface Pro.

The Surface Pro is a nice piece of kit, but one thing that irritates us about it is the reliance on the kickstand to keep the device upright when using it with a keyboard. That isn't really practical when you're typing with the device on your lap.

And while Microsoft's Type Cover is pretty good as lightweight attachable keyboards go, the key travel is very short.

The Brydge 12.3 addresses both of those issues. The tablet slots into a pair of hinges fitted to the top edge of the 12.3, and then the combined unit can be opened and closed like a conventional notebook. The hinges have a pleasant action that snaps shut as they approach the closed position but otherwise provide enough resistance to hold the Surface at pretty much any usable angle.

An important part of the design is that the 12.3 weighs enough (approx 0.75kg) to stop the assembly tipping over when you touch the screen. In fact, we found it more stable in this regard than some hybrid models we've used.

The 12.3 is designed to accommodate the Surface Pro 3, Pro 4 and the new Surface Pro thanks to a system of shims that stick to the inside of the hinges. It is delivered with the Pro 4 shims fitted, but they are easily peeled off for use with a different model.

Our experience with fitting the shims was that it's fine if they go into place properly the first time, but if the adhesive catches before you get the shim's tongue into the corresponding slot in the hinge, it's a bit of a struggle to get everything seated properly.

The shims appear to be made of silicone rubber, and they grip the Surface firmly yet gently. Attaching or removing the keyboard is fairly easy, but you do need to ensure that the Surface is fully inserted into both hinges. Once fitted, the 12.3 It looks the part, and is a good match for the Surface Pro's exterior.

We tested the Brydge 12.3 with a Surface Pro 3, and found the slightly wider pitch (19mm vs 18mm) and slightly longer key travel (2mm vs 1mm, as best we could measure it) made the 12.3 more useable than the Type Cover, and it subjectively seemed as good as many notebook keyboards we've used, especially those on cheaper models. The keyboard backlight – manually controlled with three levels of brightness - is a plus if you spend a lot of time in darkened conference halls, aircraft cabins and so on.

The trackpad is a little on the small side at 8cm wide – the Type Cover's is only 10 percent wider, but we found that does make a difference. Clicking the pad takes more pressure than we are used to, but a tap works just as well so this shouldn't be a significant issue. It's might be because we're used to Apple trackpads, but we would rather the 12.3's trackpad had a smoother surface so a fingertip just glides across it.

There's no full-time electrical connection as the 12.3 communicates with the Surface Pro via Bluetooth. This means it is possible to detach the Surface and still control it from the keyboard. A USB cable is included for recharging they keyboard's battery from the tablet or other source – one charge is said to be good for three months' use, but our test period wasn't that long.

A "pro" version with a 128GB SSD is available, but that doubles the price. Mounted inside the 12.3, the SSD appears as an external drive when the USB cable is connected to the Surface Pro.

The weight of the 12.3 is a mixed blessing. As mentioned above, it is key to avoiding the need for the kickstand, but means you're carrying around almost half a kilo extra compared with the Type Cover. That's not a lot absolute terms, so it wouldn't be a problem when moving around in a building. But remember that this is extra weight on top of everything else you carry when travelling, and at about 1.6kg the Surface Pro 3 plus 12.3 keyboard is slightly heavier than a 13in MacBook Pro or a Surface Book.

If you're an iPad user, don't feel jealous – Brydge has a series of similar keyboards to suit various iPad models.

Verdict
The 12.3 sounds expensive at $249, but since that's the same as Microsoft's Type Cover you can choose between 'thin and light' or the convenience of a conventional clamshell arrangement at no extra cost and without having to sacrifice easy separation for use in tablet mode.
Overall
Specs
$249 AUD
(pricing info)
• www.brydgekeyboards.com
Backlit Bluetooth keyboard and trackpad; exchangeable shims to accommodate various Surface Pro models; Micro USB charging port.
Copyright © BIT (Business IT). All rights reserved.
Tags:
hardware keyboard review
By Stephen Withers
Jun 22 2017
8:13PM