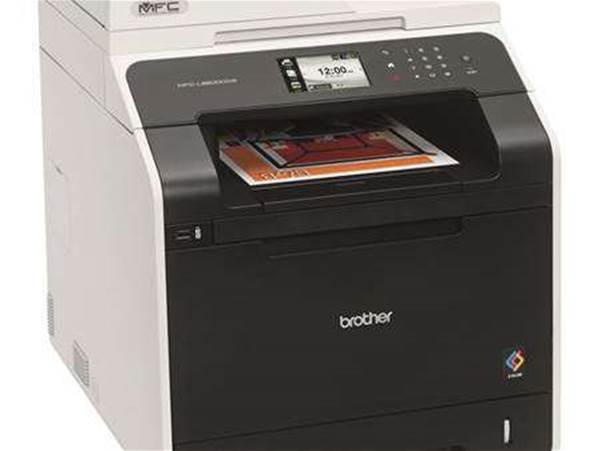 Brother printers have usually been designed for individual to SOHO uses, but the company has just launched a new range geared towards corporate use. We recently spent some time with the MFC-L8850CDW, which is pitched at organisations with around 20-50 users, and that could include SOHO environments if heavy workloads are commonly expected.

Wi-Fi and cloud is integral to its operation. For example, OCR scans are uploaded to a cloud service (transparently) for text conversion before being returned as a .doc (or file format of your choice) to your own preferred cloud service (or a printout). Brother has released (and continues to release) apps which add or enhance functionality to the printer, and these are downloaded upon release to the printer, with the OSD informing you of the update next time you log on.

Cloud support includes Picassa, Flickr, Facebook, Google Drive, Evernote, Dropbox, Box and OneDrive. Besides storing a scanned file to any of these, you can also log in via the LCD screen and print any file you have stored online. Several accounts for each cloud service can be stored, and if you like a PIN can be added as an extra security layer beyond your usual cloud service username and password. The printer also supports guest accounts.

Impressively deep permission sets can be set up per user, restricting the number of copies a user can print in colour, for example, as well as access to the cloud and print from USB. The machine will also email the network administrator with regular reports.
No serious editing is possible via the LCD (bucking a trend that started a few years ago when printer manufacturers were looking for selling points). But you can crop areas of a page by drawing in a red Texta around an area. The machine will scan the image and spit out a page minus the highlighted area/s.

Colour photo prints were surprisingly good, despite this being something the machine was never intended to be used for. We can see it working well in small organisations, and up, but it’s certainly overkill for solo operators.