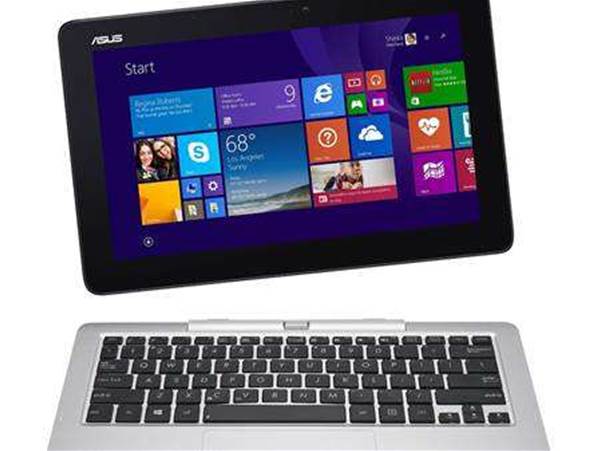 The Transformer Book T200TA is the big brother to Asus’ smash-hit 10in Transformer Book T100 convertible, expanding the display to 11.6in while keeping the price down to a mere $649. With a quad-core Atom processor at the helm and a good-quality IPS screen, this looks to be the hybrid bargain of 2014.
At such a low price, you’d expect aesthetic compromises, but the T200TA is surprisingly handsome. The rear is finished with a fetching dark blue swirl, while the keyboard dock combines a black matte-plastic base with a silver keyboard surround.
Newsletter Signup

I have read and accept the privacy policy and terms and conditions and by submitting my email address I agree to receive the Business IT newsletter and receive special offers on behalf of Business IT, nextmedia and its valued partners. We will not share your details with third parties.
Despite its  plastic construction, the T200TA feels solid, and there’s little flex in either the tablet or dock. The whole assembly is a little chunky, however. The tablet measures 12.7mm thick and weighs 781g; the keyboard dock swells the weight to 1.64kg.
Unexpectedly, part of the weight of the base is down to a replaceable 2.5in 500GB hard drive, which supplements the tablet’s modest 32GB of flash storage. It’s great to have that kind of storage on hand – although the tablet must be docked in order to access it.
The tablet has decent connectivity options. There’s dual-band 802.11n Wi-Fi and Bluetooth 4, as well as micro-HDMI and micro-USB ports, plus a microSD slot to supplement the tablet’s built-in storage. It’s worth investing in a card, as the OS and recovery partition swallow most of the 32GB drive – we were left with around 8GB free before we’d even installed our benchmarks.
The dock, meanwhile, adds a full-sized USB 2 port, one USB 3 port and Gigabit Ethernet, and the keyboard and touchpad are a good size – although the keys are rather limp.
The T200TA has a 5-megapixel rear-facing snapper and a 2-megapixel front camera. The rear camera dredges up enough detail for social networks and the like, but our test shots were dogged with noise and ugly compression artefacts.
The 11.6in display has a low resolution of 1,366 x 768, but Asus has invested where it counts: a good-quality IPS panel. Although brightness tops out at a modest 215cd/m2, a contrast ratio of 836:1 gives images plenty of detail, from the darkest shadows to the brightest highlights, and viewing angles are wide too. If we had to make a criticism, we’d note that the panel fails to reproduce the richest, most saturated colours, since it covers only 63.9% of the sRGB colour gamut, but overall it’s still an attractive display to use.
With one of Intel’s quad-core Bay Trail CPUs powering the whole show, the T200TA feels spritely most of the time, and an Overall score of 0.37 in our Real World Benchmarks reflects more than enough poke for everyday office and internet applications. However, if you were hoping to use that 11.6in screen for multitasking, you may be disappointed. Asus has trimmed costs by partnering a 32-bit installation of Windows 8.1 with a frugal 2GB of RAM, and there’s no way to add extra memory. As a result, the system can easily get bogged down, resulting in performance that’s sluggish even by Atom CPU standards.
On the upside, battery life is as good as you’d expect for an Atom-powered device. With the screen dimmed to 75cd/m2 and Wi-Fi turned off, the T200TA flicked through a variety of web pages and documents for 10hrs 40mins before needing a trip back to the mains. Unlike the T100, the T200TA charges only via the supplied mains charger – charging over USB isn’t supported.
At this price, we never expected the T200TA to be the last word in ergonomic design, but it’s a great little hybrid that does a cracking impression of a budget 11.6in laptop, and doesn’t make a bad tablet either. The display in particular is significantly better than the screens you’ll find on most budget laptops. The Atom processor and 2GB of RAM may not provide enough headroom for everyone’s needs, but as a cheap and versatile Windows device, the Asus Transformer Book T200TA takes some beating.
Verdict
Asus has worked some low-cost magic to serve up the Transformer Book T200TA, a capable 11.6in Windows 8.1 hybrid. Read the review.
Overall
Specs
11.9in $649 AUD
(pricing info)
Copyright © PC Pro, Dennis Publishing
Copyright © PC Authority, nextmedia
Tags:
asus asus transformer book t200ta hardware review
By Sasha Muller
Feb 27 2015
5:46PM