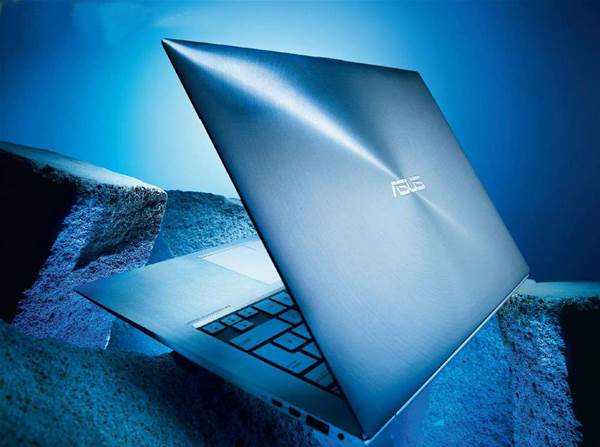 If the Ultrabook is all about marrying beauty with brawn, then Asus’ Zenbook UX31 would seem to be the perfect poster child for the breed. Despite housing the fastest processor of the current crop, and a lightning-fast SandForce SSD, Asus has managed to produce a thing of rare beauty.

Clad in sheets of machined aluminium, the Zenbook UX31 is a visual treat. While paying homage to the silhouette of Apple’s MacBook Air – it tapers from a curvaceous 21mm at its rear to barely a few millimetres thick at its front edge – Asus’ latest manages to retain its own personality. Concentric circles spin across the dark silver lid, the clean, squared-off lines of the interior contrasting starkly with the aggressive exhaust detailing along the hinge.

It isn’t perfect. Press your nose to the Asus and it’s possible to catch the occasional glimpse of poorly milled metal, the odd area where the fit and finish aren’t utterly exemplary. For a first attempt, however, there’s no question that the Zenbook is stunning.

With the Asus logo at its centre, dark silver circles spin across the Zenbook’s ultra-rigid lid. Combining sturdy build with lovely looks, Asus has done a cracking job
Newsletter Signup

That curvaceous metal body leaves the Zenbook UX31 a little heavier than the likes of Toshiba’s 1.09kg Portégé Z830, but not by much. At 1.40kg, the Asus is still light enough to almost disappear in a bag, and it’s unyieldingly stout too. The rock-solid base and rigid lid make for a machine that feels every inch the match of Apple’s 13in MacBook Air. When it comes to build quality, there’s simply no other Windows laptop that has the measure of the Zenbook.

And under that glitzy surface beats the heart of a blazingly fast ultraportable. The Core i7 processor runs at a nominal 1.8GHz, turbo-boosting up to 2.9GHz as and when the extra speed is required, and is partnered with an equally nippy SSD. It’s a potent combination, and enough to push the Asus in to pole position in our Real World Benchmarks, with a result of 0.62.

It all makes for a laptop that breezes through everyday tasks. A cold boot sees the Windows desktop appear in around 20 seconds, and thanks to Asus’ Instant On technology, the Zenbook UX31 wakes from sleep in around two seconds. It’s the perfect travelling companion, too, with 8hrs 53mins in our light-use battery test. The Asus isn’t only fleet of foot, it keeps going once many of its rivals have skulked back to the mains socket.

The Zenbook UX31 is a true labour of love. The Asus’ styling is almost impeccable, with the engraved hinge and exhaust detailing making for a truly stunning laptop

It’s hard not to be seduced by the Zenbook UX31’s charms. The Bang & Olufsen-branded speakers conjure a reasonably crisp sound, while the display above stretches a spacious 1600 x 900 resolution across its 13.3 inches. With every other laptop here settling for a lower 1366 x 768, the Asus’ extra pixels are welcome.

There are disappointments, however, and the display provides the first. It’s blindingly bright – the maximum brightness of 506cd/m2 is exemplary – but the image quality is far from perfect. The high 7051k colour temperature leaves images with a blue tint, while the 204:1 contrast ratio leaves it struggling to reveal detail in darker scenes.

Back when we first reviewed the Zenbook UX31, we had a variety of complaints with the glass touchpad. Thankfully, though, the intervening months have seen the release of updated drivers that have solved many of the issues.

The glass surface feels just as smooth under the finger as it ever did, and the updated drivers have made a big difference in responsiveness, helping cursor movement feel more immediate, and leaving the touchpad a little less prone to the jitters. The three-fingered upward swipe to activate Flip 3D remains a little unreliable, though.

1. The Asus’ keyboard is perhaps its weakest suit. With no backlighting and the tendency to miss keystrokes, it isn’t our favourite. 2. Updated drivers have done wonders for the touchpad, ridding it of the laggy cursor control exhibited by early models

The Asus’ keyboard is potentially more divisive. The Scrabble-tile keys are well proportioned with wide channels pooling between, and while there isn’t much travel to each keystroke, the firm action initially makes for a luxurious-feeling keyboard. It isn’t brilliant, though, feeling a little dead under the finger compared to the best, and with lighter keypresses often failing to register. This is a keyboard that requires a firm prod at every stroke.

The final niggle is the lack of backlighting. For those that would rather not find themselves floundering in the dark, it’s a fairly crucial omission.

In terms of connectivity, there’s an understandable shortage, but it’s better than some other Ultrabooks. Asus has squeezed in a single USB 3 port on the right, and an SD card reader, headphone output and USB 2 port on the left. There’s no room for full-sized video connections, but you do get mini-D-SUB and micro- HDMI sockets. Network connectivity is nothing to write home about, though, with single-band 802.11n and Bluetooth 4, but there is at least a USB Ethernet adapter provided.

Asus also provides a D-SUB adapter in the box – both squeezing into a natty little travel pouch – and the fashion-conscious will appreciate the matching padded sleeve for the laptop itself. The final touch is the power supply: Asus is one of the few manufacturers to adopt a dainty little wall-wart PSU.

There’s no doubt this Asus Zenbook is a great laptop. It has the all-important wow factor, it’s gorgeous to look at, powerful, beautifully built, and that gleaming high-resolution display puts most of its rivals in the shade. It isn’t perfect, however, and if Dell had managed to settle on a price for its XPS 13, the UX31 would have been pushed into second place. As it stands, however, the Asus Zenbook UX31 is our Labs winner, however the pricetag seems a little steep when compared with what it is going for overseas.