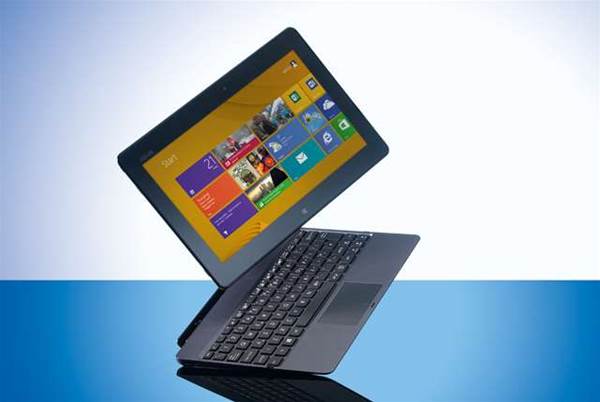 Taking the hybrid design pioneered by its Android-powered Transformer tablets, and adding Windows RT, the ASUS VivoTab RT takes the fight to Microsoft’s own-brand tablet with gusto.
At a glance, you’d barely be able to tell the VivoTab RT from its Android-powered cousins. Apart from a subtle tweak to the mobile dock’s hinge, and the capacitive Windows Start button on the tablet’s screen surround, it’s practically identical to its Transformer-branded stablemates, with the same gorgeous brushed-metal finish.
Newsletter Signup

I have read and accept the privacy policy and terms and conditions and by submitting my email address I agree to receive the Business IT newsletter and receive special offers on behalf of Business IT, nextmedia and its valued partners. We will not share your details with third parties.
That’s no bad thing. Compared to Microsoft’s Surface, the tablet part of the VivoTab RT is an absolute featherweight. Asus has opted for a 10.1in screen, half an inch smaller than that of the Surface, and the result is a tablet that, at 530g, weighs 20% less than its rival.
We’ve only one complaint: after the diamond-grade toughness of the Microsoft Surface, the Asus hardware feels noticeably more flexible - but that’s being really picky.
The dock and display
The tablet and optional Mobile Dock are a winning combination. The tablet slots home into the mobile dock base with a pleasing thunk, and a haptic buzz reassures that it’s locked safely in place. With the dock attached, the VivoTab RT weighs 1.07kg, only 107g more than the Surface with its Type Cover.
The transformation from lightweight tablet to fully functional netbook is seamless. The keyboard’s keys have a crisp action and a satisfying amount of travel, and while the layout is still a touch cramped, we’re pleased to see that Asus hasn’t had to shrink the cursor keys to unusable proportions. The buttonless touchpad generally works well, too, with two-fingered dabs bringing up the right-click context menu and two-fingered swipes smoothly scrolling you through menus and web pages. The only niggle is that pinch-to-zoom gestures are juddery – it’s better to use the touchscreen itself.
The 10.1in display feels small after Microsoft Surface’s 10.6in unit, but it shares the same 1366 x 768 resolution and quality is noticeably better. The display oozes with intense, saturated colour, and with a maximum brightness of 466cd/m2 and a contrast ratio of 932:1, the Super IPS+ panel puts in a brilliant all-round performance.
Internally, the core hardware is no different from the Microsoft Surface. It has a 1.2GHz Nvidia Tegra 3 quad-core processor, delivering practically identical performance. A result of 1,004ms in the SunSpider browser benchmark puts the VivoTab RT just in front, but further testing with the native Windows RT benchmarking app, Speed Test Pro, sees both tablets draw level. Transfer rates on the internal solid-state storage were almost identical. Both tablets recorded CPU and GPU test results within 2% of each other.
Indeed, any performance issues we noticed aren’t peculiar to Asus’ implementation of Windows RT. On both the VivoTab and Surface, apps can take their time to launch, and multitasking causes annoying pauses.
Battery life
Battery-life testing initially hands the win to Microsoft’s Surface. Where Surface lasts more than nine hours in our video rundown benchmark, the VivoTab RT lasted 6hrs 53mins. Add the mobile dock, however, and the secondary battery inside swells battery life to 12hrs 33mins. It’s worth mentioning, too, that the Surface’s permanently enabled dynamic contrast queers the pitch somewhat in this test, since the screen dims automatically during bright scenes.
Asus can be taken to task on the connectivity front, though. The one USB 2 port is relegated to the mobile dock, and on the tablet itself there’s a microSD slot, micro-HDMI port and a 3.5mm headphone jack. Given that part of the appeal of Windows RT is the ability to use legacy USB devices, the lack of a USB port on the tablet itself puts a serious dent in the VivoTab RT’s appeal.
Then there’s the presence of only single-band 802.11n wireless versus the dual-band radio of the Surface. Still, Bluetooth 4 and GPS make amends, as do the front 2-megapixel and rear 8-megapixel cameras. Photos are vastly more crisp and less noisy than those produced by the Surface, and the front-facing camera provides more than enough detail for videoconferencing.
Verdict
With the 32GB tablet coming in at $699 (the 64GB isn’t widely available yet at time of writing), the VivoTab RT doesn’t seem cheap until you factor in the included mobile dock. The price is about the same as the Surface and optional Type Cover, but it’s still a high price to pay for what often feels like little more than a swanky, premium netbook.
Yet, it’s testament to the VivoTab RT’s alluring looks and slick design that, even at this price, it retains some appeal. The limiting factor is Microsoft’s cut-down OS: Windows RT’s appeal is hobbled both by its inability to run x86 software and its current lack of top-tier apps. While the preinstalled presence of Office is a nice bonus, it simply isn’t enough to justify the premium price over comparable Android and iOS tablets, both of which are served by a far more comprehensive range of apps.
Ultimately, Asus’ VivoTab RT gets the hardware side of things almost spot on: it’s gorgeous, lightweight and beautifully designed. The crushing issue is that, at this price, the competition is considerable. And if the only Windows 8 tablet in this group, Acer’s Iconia W700, is a sign of things to come, Windows RT devices are in trouble in the face of cheaper Windows 8 devices. When it’s possible to buy a fully fledged Windows 8 tablet, we can’t see people settling for anything less.
Verdict
The Asus VivoTab RT delivers the best Windows RT tablet yet, although the price is seriously high. Read the review.
Performance
Battery Life
Features & Design
Value for Money
Overall
Specs
$699 AUD
(pricing info)
Copyright © PC Pro, Dennis Publishing
Copyright © PC Authority, nextmedia
Tags:
asus hardware review rt tablets tf600t vivotab windows
By Staff Writers
Jun 7 2013
1:44PM