Asus Transformer Pad TF103C reviewed: handy for a touch of work on the move 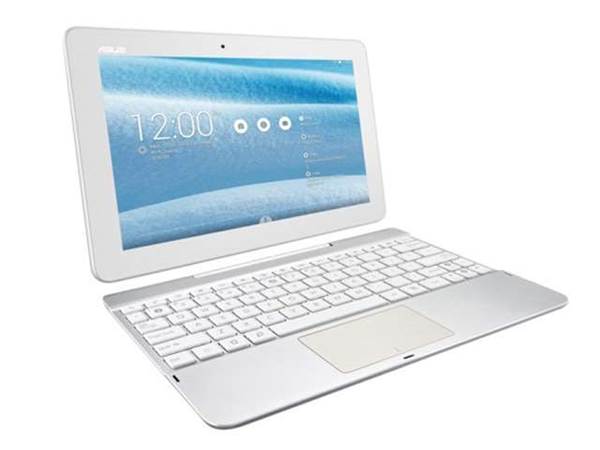 Asus has been producing its Transformer Android hybrids for years, but the TF103C breaks new ground for the company. While previous efforts have been pitched at the premium end of the market – to compete with the likes of Apple’s iPad Air and the Sony Xperia Z2 Tablet – this latest effort is targeted firmly at the lower end, where the Nexus 7 holds sway.

The Transformer Pad is a full-sized 10.1in slate that turns into a compact laptop with the addition of a keyboard dock; and it costs a mere $429. This makes it a bit of a bargain.
Despite the low price, the TF103C doesn’t feel cheaply made. It’s solid, with a rubbery plastic coating on the rear giving it a firm feel in the hand, and solid power and volume buttons on the top and left edges lending it a sense of dependability.

The keyboard dock – an essential purchase, we think – is endowed with similar qualities. It’s made from tough plastic, and both the keyboard and touchpad work without fuss. In particular, the keyboard is a triumph, with a sensible layout and keys that have plenty of travel.

What you don’t get is the lightest or slimmest tablet around – it weighs 556g and measures 10mm thick, while the dock takes that up to 1.1kg and 23mm – but you should still be able to carry it around in a bag easily enough. There are benefits to lugging the keyboard around, too, since it adds a full-sized USB socket to the tablet’s microSDXC slot. Unlike the firm’s other Transformer Pad devices, however, there’s no second battery in the base.

To keep such a tight lid on the price, there have to be compromises, and the screen is the first victim here. The TF103C comes not with a 1080p screen, but a 1,280 x 800 one, a resolution we thought we’d waved goodbye to on all but the very cheapest tablets. Inevitably, images look more pixellated than on the Sony Xperia Z2 Tablet, say, and text doesn’t have that print-on-paper sharpness we’ve come to expect from the best tablets.

Images do, however, look bright and bold. The display reaches a maximum brightness of 407cd/m2 and a contrast ratio of 1,018:1, both of which are excellent figures, and the glass also benefits from a fingerprint-resistant coating. We found it still picked up the odd greasy dab, but the coating means such dirt is easily wiped clear.

It’s tougher to overlook the poor-quality cameras. Both the 2-megapixel snapper at the rear and the front-facing 1.2-megapixel webcam are dreadful. Photographs lack detail, and videos – captured at 720p – are noisy, even in the brightest light.

Asus has gone all Intel with its latest clutch of budget Android tablets, and this hybrid is no different. At the helm is one of the latest Bay Trail processors – a quad-core, 1.86GHz Intel Atom Z3745, accompanied by 1GB of RAM and 8GB or 16GB eMMC storage – and its performance is spritely. In the SunSpider JavaScript benchmark, a time of 610ms marks out the TF103C as one of the fastest tablets on the market, not far behind the more expensive iPad Air or Samsung Galaxy NotePRO 12.2.

Its results in Geekbench 3 are equally impressive, with scores of 757 and 2,334 in the single- and multi-core tests. With a frame rate of 28fps in the demanding GFXBench T-Rex HD gaming test, it’s as quick as any tablet we’ve tested.

We have no complaints about performance in general use, either: the TF103C coped with everything from web browsing to word processing and gaming, barely breaking a sweat. It runs Android 4.4, so you have the latest software to play with, too.

Inevitably, Asus has tinkered with the user interface. The most noticeable change is a rejigging of the notifications menu along the lines of Samsung’s Galaxy S5 smartphone, complete with pale-green pastel colours and circular shortcut buttons. Otherwise, the tweaks are confined to a selection of preloaded Asus apps

Battery life is acceptable. Although there’s no second battery in the keyboard base, the TF103C lasted 8hrs 21mins in our looping video test.

Until now, if we’d been asked to recommend a budget tablet, we’d have plumped for the Nexus 7 without a second thought, but the Asus Transformer Pad TF103C has given us another option. For fans of large-screened tablets who might want to do a touch of work on the move, its performance, display quality and usable keyboard make it a worthy alternative.