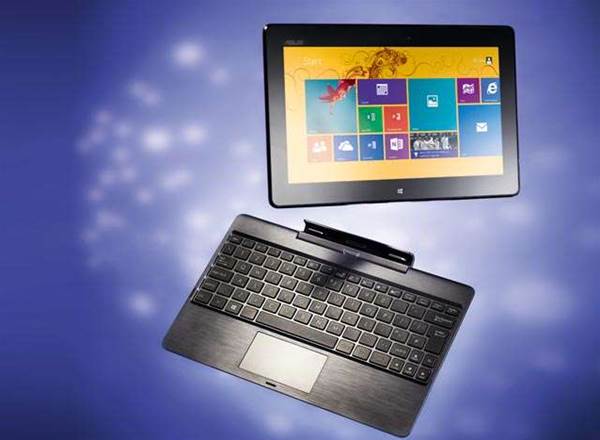 Just like its Android-powered namesakes,the ASUS Transformer Book T100 partners a 10.1in tablet with a matching keyboard dock; the difference is that it has a quad-core Intel Atom processor and runs Windows 8.1. The big news, however, is that it costs only $600.

If your memories of netbooks are of chubby, miniaturised laptops with glacial performance, be assured – this Asus is nothing of the sort. In the flesh, the T100 isn’t only surprisingly petite, it’s even moderately attractive.

The dark-grey plastics of the base are imprinted with a fake brushed-metal finish, and the tablet’s glossy plastic lid mimics Asus’ top-flight Zenbooks, with circular patterns spinning around the Asus logo.

The 10.1in tablet weighs only 550g and measures 11mm thick. While there isn’t the premium-feeling build quality of the best Android tablets, or Apple’s iPad Air, it isn’t unforgivably low-rent. There’s some give in the plastic rear, but it’s solid enough. Slot it back into the keyboard base and the two latches hold it firmly, only letting go once the release catch is pressed fully. Together, they weigh 1.07kg.

Blazing a trail
The design isn’t remarkable, but the hardware inside certainly is. It marks the debut of Intel’s latest Atom platform, Bay Trail. This is big news, and perhaps the platform’s biggest development since its inception.

At the heart of Bay Trail lies the new 22nm Silvermont microarchitecture. This introduces a quad-core design and out-of-order execution, as well as support for USB 3, DDR3 RAM and 64-bit operating systems. Graphics performance promises to take a leap forwards, too, thanks to a cut-down Ivy Bridge-class GPU.

The T100 is powered by a mid-range Bay Trail CPU – the quad-core, 1.33GHz Atom Z3740 – which is capable of running at burst frequencies of up to 1.86GHz. Although the CPU supports up to 4GB of RAM, Asus has focused on keeping the T100 affordable – there’s a basic 2GB of DDR3 RAM and 64GB of eMMC flash storage. It’s worth noting that only 48GB of this is left free, however.

In everyday use, the new face of Intel’s Atom brings as dramatic a transformation as you could hope for. Compared to our experiences of Windows 8 on the previous generation of Atom devices (Clover Trail), the Asus is a speed demon. Applications load far more energetically, web browsing is slick and smooth, and the overall experience remains impressively responsive, right up to the point where the limitations of the 2GB of RAM
start to show.

Full speed ahead
In benchmark testing, the Asus left Clover Trail-powered rivals far behind. Where the 1.8GHz Atom Z2760 of Dell’s Latitude 10 scored 0.22 in our Real World Benchmarks, the Asus racked up a result of 0.32, which is more than 45% faster.

The biggest improvement was in the Media element, which tests a device’s ability to encode MP3 files, render HD video and edit image files in Photoshop. The dual-core, Hyper-Threaded CPU in the Dell scored 0.18; the Asus’ quad-core CPU managed 0.35 – an improvement of 94%.


The increase in graphics performance is harder to gauge, since our Crysis benchmark didn’t work at all on the previous generation Clover Trail hardware. In any case, the Asus exceeded expectations. With Crysis running in Low quality settings at its native resolution of 1366 x 768, the GPU managed an almost-playable average of 20fps; knocking the resolution down to 1280 x 720 was enough to buoy the average to 23fps. Set your sights on less demanding games, and modest resolution and detail settings, and the Asus will cope far better with PC games than you’d expect.

Battery life remains as good as on other Atom devices. In our light-use battery test – which dims the screen brightness to 75cd/m2, switches off Wi-Fi and scrolls through a selection of web pages – the Asus lasted 9hrs 6mins. That doesn’t come close to the Dell Latitude 10, which lasted 12hrs 35mins with its standard battery, but the Dell weighs a rather more portly 658g. Sadly, unlike Asus’ Android Transformer tablets, the T100’s keyboard dock doesn’t sport a second battery – which really seems like a missed opportunity.

Long live the netbook
For all its potential, it’s reassuring that Bay Trail has materialised in such a sensibly designed device. For what it’s intended to do – that is, deliver a workable halfway house between tablet and compact laptop – it’s a cracking piece of kit.

As a tablet, we’ve no qualms with the T100 at all. The 10.1in display isn’t stunningly good, but the 1366 x 768 resolution is ample for the screen size, and the IPS panel has wide viewing angles. Brightness tops out at a modest 240cd/m2, but the contrast ratio of 889:1 is excellent, and ensures images and movies look full of life. Colour reproduction isn’t the match of pricier devices – skin tones look yellowish, and colours lack boldness – but this is a minor quibble.

Slotting the T100 into its keyboard dock brings back warm, fuzzy netbook memories. The Scrabble-tile keys are small, but there’s a pleasing resistance to each keystroke, and while we’d prefer a wider right-Shift key, we could get used to the small one here.

The buttonless touchpad beneath is similarly miniaturised, but it works well and supports edge-swipes, pinch-to-zoom and two-fingered scrolling, as well as two-fingered taps to emulate right-clicks. We have one small complaint: clicking the pad is noisy, so you’ll want to dab it unless you fancy enraging everyone in the vicinity.

Asus has included a fine range of features for the money. The tablet charges via the micro-USB connection, and there’s also a micro-HDMI output, and a microSD slot for expanding the frugal 32GB of storage. In addition, there’s dual-band 802.11n wireless, Bluetooth 4, a TPM2 security module and a 1.2-megapixel front-facing camera.

The dock adds a single USB 3 port, which is a most welcome addition. As a result, offloading files from the main 32GB system drive is painless.

By far the most attractive feature of the T100, however, is the bundled software. Somehow, Asus has found room in the budget to provide a full copy of Microsoft Office Home & Student 2013. For many, that will be enough to turn the Asus from being a highly tempting purchase into an absolutely essential one.

Verdict
While Microsoft is still trying to convince everyone that Windows RT devices are the spiritual successors to the netbook, Intel has made its feelings clear – ARM isn’t welcome to a piece of the Windows action.

The new Atom platform delivers a dramatic performance increase – enough power for casual gaming – and the same great battery life, all at a price that has allowed Asus to sell the Transformer Book T100 for only $600. In our opinion, this represents the death knell for Windows RT.

As for the T100 itself, it delivers everything you could ask for, and it’s ludicrously affordable. Snap one up while you can – we predict these will sell out fast.