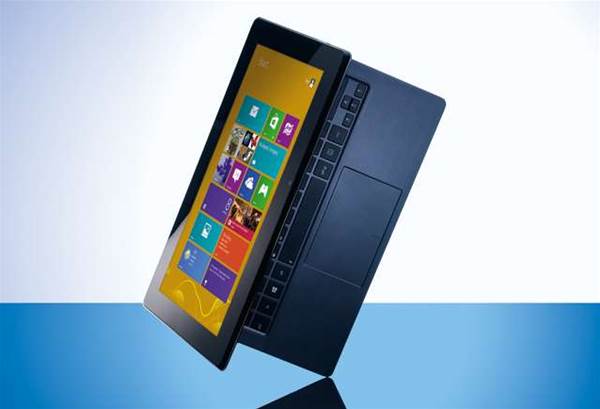 Instead of producing an intricate hinge mechanism to turn the ASUS Taichi 21 from a laptop into a tablet, ASUS has simply slapped an extra screen on the back of the lid.

It’s a far cry from the Dell XPS 12’s balletic, spinning display, but there’s much to like about the Taichi’s simple approach.
To switch from laptop to tablet mode, all you do is close the lid. In this mode, a bundled stylus and pressure-sensitive N-trig digitiser layer add another dimension to simple finger-driven touchscreen operation, and with the lid open, the Windows desktop can be mirrored on both screens, or extended across them.
Newsletter Signup

I have read and accept the privacy policy and terms and conditions and by submitting my email address I agree to receive the Business IT newsletter and receive special offers on behalf of Business IT, nextmedia and its valued partners. We will not share your details with third parties.
Display
It’s a flexible thing, and each of the Taichi’s 11.6in, Full HD, IPS displays are of commendable quality.
The colour temperature of both is on the warm side, but this lends images a pleasant rosy tone, and the contrast ratio is the best of the machines reviewed when this was compared to others [Note: this comment refers to the April 2013 issue of PC & Tech Authority magazine where the ASUS Taichi was compared to several other hybrids].
Our only qualm concerns the backlight: the laptop display’s brightness and the tablet panel’s result could be better.
Features
At this price we’d expect a top-notch specification, and here the Taichi 21 delivers. The Core i7-3517U processor resulted in the third-fastes benchmark result compared to the others we tested it against [As with the earlier note, this refers to the April 2013 issue of PC & Tech Authority magazine where the ASUS Taichi was compared to several other hybrids] and there’s a 256GB SSD to help keep Windows 8 nippy.
Battery life isn’t a strong suit, either: the Taichi lasted just under five hours in both laptop and tablet modes, which are the worst results of the machines it was compared with.
Design
Ergonomically it’s better news for the Taichi – at least in laptop mode. The Scrabble-tile keys are comfortable and the touchpad includes support for Windows 8’s edge gestures.
And, neatly, Asus has employed a matte finish on the internal laptop display to keep distracting reflections to a minimum.
All in all, it’s more than a match for any 11.6in Ultrabook.
Again, though, there are niggles. Transitions between the laptop and tablet modes take around three seconds, and as the laptop display isn’t a touchscreen, we often found ourselves reaching out to perform a fruitless prod.
Switch to tablet mode, and the Taichi 21 isn’t entirely convincing. The design allows the touchscreen display to be used easily at a desk, but it still isn’t light enough for handheld use.
While it’s the lightest hybrid of those it was compared against in PC & Tech Authority's April issue, it’s still almost double the weight of an iPad.
The two-screen design is elegant, but the poor battery life and dim displays are pressing concerns, and the luxury of two screens doesn’t come cheap.
At $1,750 it is reasonably priced, but we found that its rivals deliver a more convincing all-round performance, often for less. In the face of this, the Asus Taichi 21 flounders.
Verdict
The Asus Taichi 21 is a clever, dual-screened design, but despite a high specification and luxurious design, this hybrid laptop/tablet just falls short
Performance
Battery Life
Features & Design
Value for Money
Overall
Specs
$1750 AUD
(pricing info)
Copyright © Alphr, Dennis Publishing
Tags:
21 asus hardware hybrid laptop tablet taichi
By Staff Writers
Apr 24 2013
9:29PM