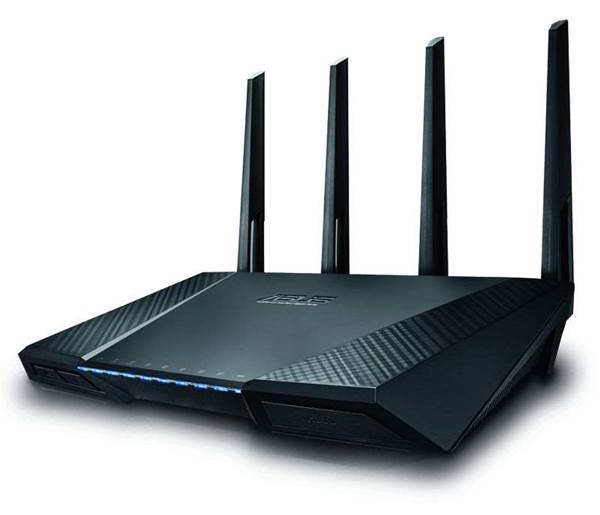 Looking like the front of a sleek sports car, the new Asus RT-AC87U takes its design and shape from the Asus Republic of Gaming G range of laptops. With its angled build, carbon fibre style finish and four giant antennas, the RT-AC87U isn’t going to win any awards for subtlety; this design is all about achieving the best performance possible.

It can still lower its presence a little by switching off the humming blue glow of the network LEDs leaving it about as low profile as a unit like this can get. Asus knows its market here is hardcore users and makes a great addition to any gamer’s or tech enthusiast’s network setup, both with design and ability.

The RT-AC87U is aiming to be the best in every way it can. Armed with a decent array of features, this router has both a USB 2.0 and USB 3.0 port for printers (Windows only) or fast access data transfer if users are yet to invest in a NAS drive or network HDD.

The four Gigabit LAN ports offer fast wired networking, and for those that are without an ADSL input, the RT-AC87U also offers a USB interface for 3G/4G Modems and Android phones (there is some setup required though). It’s good for those instances when your internet is down or you’ve just moved into a new place.

Under the hood Asus has been hard at work in their testing labs with this router, ramping up the power to an impressive MIMO 4x4 wireless transmission with not only a dual core 1GHz processor for running the router system itself, but also with a separate more powerful 1.2GHz dual core just for running its hardworking 5GHz AC network. It is clear that Asus are trying to squeeze as much grunt as they can at a reasonable price.

Its antenna system puts out four separate spatial data streams using AiRadar beamforming that Asus boasts can give out up to 1734 MBits/s on its 5ghz network while still offering up to 600Mbits/sec through QAM (if you have the supported adapters) on its 2.4GHz network, making it one of the fastest routers on the market. Our in-house tests came back with extremely impressive results. The 802.11ac connection gave a blazing 76.98 MB/s when connected to an AC1200 network adapter, with a maximum speed of almost 140 MB/s during its peak transfer times.

The 802.11n connection also surprised us, giving an unwavering average of 43.31 MB/s for its transfer rate. In fact, the GUI has built in speed testing applications to help monitor its output and even insight into the CPU and RAM performance of the router for those users out there that are all about statistics checking.

The onboard GUI is noteworthy as well, the layout is incredibly simple and well organised. Users will find a massive collection of options for functions and features, all laid out in straightforward menus that will make anyone feel at home no matter what your technical knowledge is like. Its URL interface is fast and smooth running, provided apps on both iOS and Android give you access to the same settings, straight from the comfort of your phone, offering all sorts of extra features like photo sharing to services such as Facebook, Flickr or Dropbox. Other features include a remote download manager that can be setup to work without a PC, downloading straight to the attached USB drives. Time Machine support is there for Mac users with an iTunes server as well, showing up on any connected Apple device.

Lastly, for the security conscious, Asus has partnered up with Trend Micro to offer an unparalleled level of protection, the RT-AC87U can not only detect and alert users of malicious actions, but also warns you about infected device’s scans, scans for weak passwords and gives some of the best parental controls available on the market offering most of the options seen in Trend’s standard computer protection software.

Combining the best of all of the features of modern router while adding blisteringly high speed throughout makes the Asus RT-AC87U a contender for one of the top spots in the current networking market. Adding an exceptional interface, custom built programs, good media support and state of the art hardware just contributes to the impressive list of features on offer.

The RT-AC87U continues Asus’ impressive run of router technology, and is a great addition to anyone’s tech setup. Interestingly, when Asus’ local PR representative first contacted us offering this router for review, it was touted at the time as a ‘gaming router’, while we now understand that’s not actually an official title, the sheer performance on offer certainly validates that moniker.