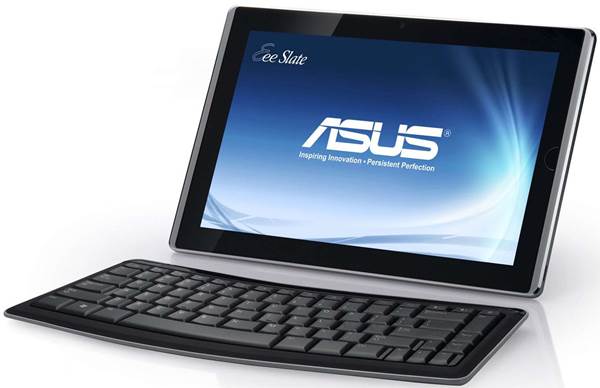 The Asus Eee Slate EP121 isn’t designed to take on the iPad. It’s important to get that out of the way immediately, because it’s an unfair comparison made by pretty much everyone who picked it up in the Labs.

This Windows 7 tablet is aimed far more at professionals than those looking for their daily hit of Angry Birds. The internals betray that immediately. Rather than crawling along on Atom power, the Eee Slate has a 1.33GHz Core i5-470UM processor – a low-voltage part that, while not quite as full-fat as it sounds, offers vastly more power than other popular tablets. Along with 4GB of DDR3, it completed our application benchmarks with an overall score of 0.39, and managed excellent scores in our Media tests: it proved nearly three times faster than the AMD Brazos chip in the Acer Iconia Tab W500.

That makes video and photo editing, along with all manner of other graphical work, a realistic option, as we proved by comfortably editing a 1080p video in Sony Vegas Pro 10. Sure, once you’ve finished creating it won’t blitz through the encoding as fast as a workstation laptop, despite its 64GB of flash storage, but then most workstation laptops don’t have the Eee Slate’s touchscreen and digitiser pen.

Open a flap on the top-right edge and out it pops, allowing you to scrawl and tap your way around interfaces that a finger prod wouldn’t comfortably navigate. This single addition gets you past most of the problems we have with Windows 7 on touch devices, such as the list menus and the tiny window controls. We’re not going to pretend the Eee Slate turns Windows into iOS or Android, but on a screen this large it’s certainly usable, particularly if you increase the DPI to 125%.

What it can do that those rival OSes can’t is run full Windows applications. To this end Asus has bundled the Eee Slate with a rebranded Microsoft Bluetooth keyboard, as well as a folding leather case with two rear flaps that prop the screen at comfortable angles, in a similar fashion to an iPad 2 case.

The case keeps all four edges uncovered, leaving plenty of room to access the buttons along the top edge (when in landscape mode) for power, locking the rotation and bringing up the onscreen keyboard. On the left edge sit a volume rocker and mini-HDMI output, along with a card slot for SD and MMC formats, two USB 2 ports and a 3.5mm input and output audio socket. The whole thing is built to an extremely high quality, with Gorilla glass on the front and a solid rear that feels like it will last.

If all this sounds like a glowing review, there are some issues. The first you’ll notice is the cooling fan, which whirrs at full speed all the time, even on an idle desktop. The cooling vent is along the top edge and, although it didn’t feel hot at all during our testing, we’re concerned at how easy it is to partially block the airflow by flipping the case closed. The case doesn’t cover the USB ports but plastic flaps do, and we found plugging anything in required disconcerting force.

Then there’s the screen. While it’s bright, responsive and boasts excellent viewing angles, the colours are muted. We measured a 288cd/m2 maximum brightness, but the uncalibrated Delta E of 6.3 is merely average, and it’s a bit off in its reproduction of greens and reds. Once properly calibrated it improved, but this is no professional IPS monitor.

Finally, it lasted only 3hrs 40mins in our light-use web-browsing battery test, which is the trade-off for having the power to run full apps. If you’re editing video, don’t expect it to last more than an hour and a half on a single charge.

As a consumer device, it’s fair to say Windows 7 still holds back the Asus from rivalling even the most average Android tablet, and the lack of an app store hurts its living room appeal. But the addition of the digitiser pen and a fast processor really do make it a viable alternative for professional uses. It certainly isn’t perfect, and the price is fairly high for the performance, but it’s the first Windows 7 tablet in a long while that we genuinely like.