Apple MacBook Pro 15in with Retina display: stunning, but expensive 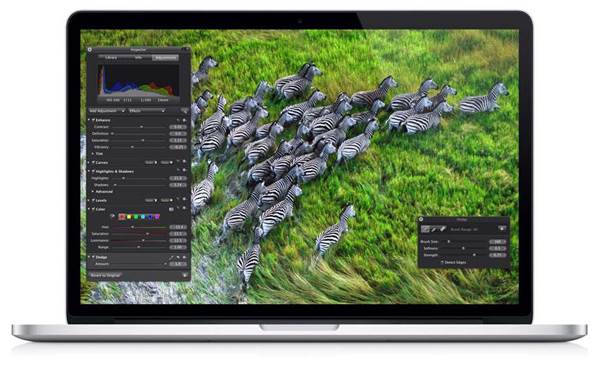 [Update: Read the review of the Apple MacBook Pro 13in with Retina display here]

While PC manufacturers have been busily updating their ranges with Intel’s Ivy Bridge processors, Apple has gone a step further. Not content with updating the internals, it has transplanted the same Retina display concept from the iPad to its flagship MacBook Pro.

Just as the iPad’s Retina display left every other tablet trailing in its wake, the MacBook Pro now promises to do the same to every other laptop on the market. Squeezing a massive 2880 x 1800 resolution into a 15.4in IPS panel, it’s a technological marvel.
Newsletter Signup

I have read and accept the privacy policy and terms and conditions and by submitting my email address I agree to receive the Business IT newsletter and receive special offers on behalf of Business IT, nextmedia and its valued partners. We will not share your details with third parties.
Pixel perfection 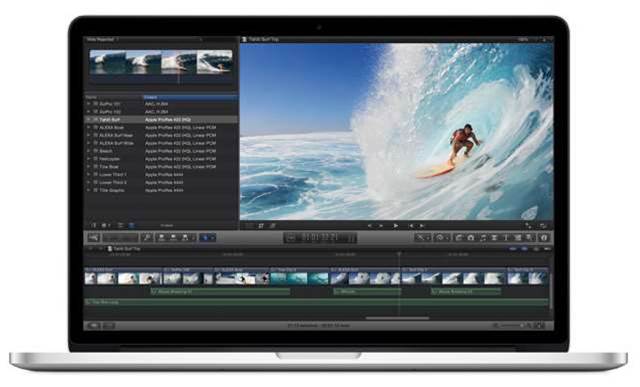 Those 5.1 million pixels aren’t quite as tightly packed as on the new iPad or the iPhone 4S, but that hardly matters. The MacBook Pro’s 220ppi density is light-years ahead of the laptop competition, and the moment OS X Lion’s desktop fades into view, it’s impossible not to be impressed. There isn’t the slightest hint of pixel structure; not a single jagged edge to be seen. Even the individual icons on the Launchpad are so clearly defined that it makes the MacBook itself look slightly out of focus.
Technically, it’s near faultless. The IPS panel’s LED backlighting delivers a maximum brightness of 333cd/m2, and the contrast ratio of 1023:1 is exemplary. Apple’s decision to factory calibrate its displays makes all the difference, too. Put to the test with our colorimeter, the display achieved superb colour accuracy.
This is the most refined display you’ll find on any laptop, at any price. However, there’s more to the MacBook Pro’s Retina display than mere pixels. While you’d imagine such a high resolution would make text tiny, and shrink toolbars and icons in applications to unusable proportions, Apple’s solution is OS-wide scaling.
In default mode, dubbed “Best for Retina”, the MacBook Pro’s desktop effectively mimics a 1440 x 900 pixel display: text is large and legible, and the icons are big enough to click without fiddling – but it’s still a 2880 x 1800 screen, and those extra pixels make all the difference.

The Retina display (right) has five times more pixels than the 11in Air
Fire up Safari and you’re rewarded with fonts so sharp and finely delineated it’s almost like viewing text on a printed page. In fact, text is so beautifully rendered it makes the low-resolution images on websites look in need of an upgrade. Apple’s own website solves the issue by using higher-resolution images when the browser detects it’s being viewed on a Retina display.
Applications face a similar issue. Apple has updated most of its iLife suite, Aperture and Final Cut Pro X, so they can take full advantage of the resolution for editing photos and HD video. Other developers such as Adobe are promising updates very soon.
Applications that aren’t yet Retina-optimised are usable, but stand out like a sore thumb, with pixellated text and icons contrasting with the crisp OS X desktop. With identical web pages open in Chrome and Safari, the difference is painfully obvious. (If you use Chrome’s developer channel, there’s already a superior beta Retina mode, which will likely have shipped by the time you read this.)
For those craving more desktop space or larger onscreen text than the “Best for Retina” setting provides, it’s possible to shrink or enlarge the virtual desktop. There are actually four more scaling settings, representing 1024 x 640, 1280 x 800, 1680 x 1050 and 1920 x 1200. Although these scaled modes aren’t theoretically as crisp as the “Best for Retina” mode, it’s hard to see a qualitative difference. Unlike on a Windows PC, where moving away from the screen’s native resolution substantially degrades the onscreen image quality, OS X’s scaling keeps text and icons crisp and clear.
Redesigning the Pro 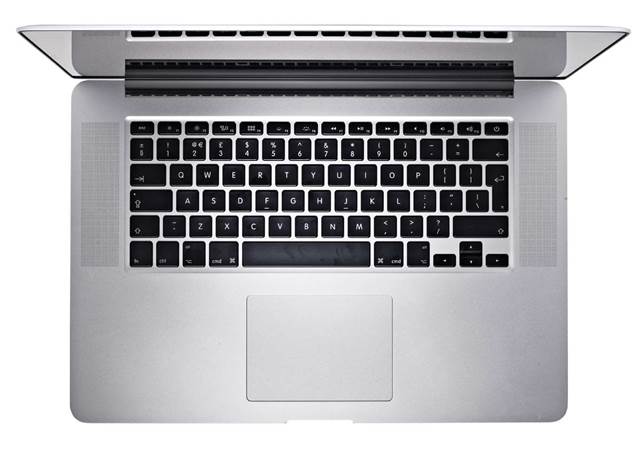 The screen is undoubtedly the star of the show here, but it isn’t alone. Apple has redesigned the chassis to be slimmer and more refined than ever. Every ounce of fat has been trimmed from the old model, dropping the weight by half a kilo and the thickness by 6mm.
You can’t lose this much weight, however, without a radical change of approach. Gone is the optical drive; the mechanical hard disk has been replaced by an SSD; and upgradability takes a blow too. With the RAM soldered into the mainboard, an SSD module of proprietary design and a set of non-user-replaceable batteries, not a single user-upgradeable element remains in the new Pro.
Some of these compromises are easily mitigated. Considering the ease with which new applications and even OS updates can be obtained via the App Store, the lack of an optical drive is becoming less of an issue as time passes. Of course, it’s always possible to shell out the $89 for the USB SuperDrive. While the non-upgradeable RAM may set power users twitching with indecision, it’s likely aftermarket vendors will soon begin marketing replacement SSD modules.
Regardless, one look at the MacBook Pro’s lithe 18mm-thick frame should banish these worries from mind: this is a truly stunning laptop. The weight loss doesn’t mean a compromise in build quality. Viciously wrenching at the base elicits hardly any flex, and it isn’t until you prod unkindly on the lid that any ripple of distortion passes through to the LCD panel.
The keyboard and touchpad are good. As usual, we found ourselves taking a little time to get used to the narrow Enter key, but this is no major criticism. The keys have a lovely cushioned spring to each keystroke, and the touchpad is a joy. The wide glass surface gives a smooth feel under the finger, and in stark contrast to the patchy gesture control in Windows 7, the multitouch gestures gel beautifully in OS X.
Connectivity

The redesign hasn’t marked the death of the optical drive alone, as Gigabit Ethernet and FireWire have also fallen by the wayside. The two Thunderbolt ports on the left side sit by a headphone output and the new arrival, USB 3. On the right you have a further USB 3 port, an SD card reader and, marking another first on this year’s model, an HDMI output.
Those craving a wired connection will have to shell out $35 for Apple’s Thunderbolt or USB Gigabit Ethernet adapters. Otherwise, you can make do with the dual-band 802.11n wireless and Bluetooth 4.
Performance
With all the fuss over the screen, it’s easy to forget the new MacBook’s other standout feature: Intel’s Ivy Bridge CPUs. The top-of-the-range model has a 2.6GHz quad-core Core i7 CPU, and couples it with a 512GB SSD for $3199, while our review model – the cheaper of the two – makes do with a 2.3GHz Core i7-3615QM and a 256GB SSD. In either case, the processor’s HD Graphics 4000 chipset is joined for more strenuous tasks by one of Nvidia’s Kepler-based GeForce GT 650M GPUs.
By any subjective standards, the MacBook Pro feels seriously fast. Booting into OS X takes about 17 seconds on average.
This combination of scorching SSD and quad-core CPU makes for superb performance. Our Real World Benchmarks (running on a Boot Camp Windows 7 partition) showed just how fast the MacBook Pro is, with a 0.92 overall score up there with the fastest laptops we’ve tested. While gaming isn't relevant if you're using this laptop for work, if you're using it for work and play we note it sailed through our easier gaming (Crysis) benchmarks, and even at Full HD resolution and High quality settings it managed a playable 32fps thanks to the GT650M.
Under normal use the vents along the hinge and the edges of the base are enough to keep things cool, but running Crysis for an hour or so saw the case become hot in areas. The wristrest hovered around 37°C, but the upper portion of the keyboard and the metallic strip along its top edge rose to an uncomfortable 54°C, and the base approached 50°C around the hinge.
Boot Camp
As with previous models, the Boot Camp drivers aren’t perfect. Windows 7 gets no graphics switching: the power-hungry Nvidia GPU runs constantly, so battery life is significantly reduced in Boot Camp. We emulated our usual battery test as well as we could in OS X, with Wi-Fi and Bluetooth disabled and screen brightness calibrated to 75cd/m2, and the MacBook Pro lasted 10hrs 34mins. Under Windows 7, this figure was only 4hrs 32mins.
Then there’s the Retina display. Running Windows 7 at 2880 x 1800 is initially impressive, but upping the DPI settings does nothing to enlarge the painfully tiny icons in applications. Open up Adobe Photoshop or Sony Vegas Pro, for example, and the icons are almost entirely unusable. Lowering the resolution to 1920 x 1200 is an option, but the clarity loss is obvious.
The gesture controls are improved, and Windows works fine for the most part, but you only really get the most from the screen when you are running OS X. For those desperate to use Windows, we’d choose virtualisation over Boot Camp – with the massive pixel density of the retina display, you could easily just run Windows in a window.
Conclusion
Apple has made some bold decisions in redesigning the MacBook Pro: the optical drive, lack of upgradability, and, of course,  the need for developers to upgrade their software to take advantage of the Retina display. But this redefines our understanding of what to expect from a laptop.
The balance of build, performance and design is impeccable, and there’s simply no other laptop that comes close to cramming so much quality into a 2kg chassis.
Verdict
The MacBook Pro gains a staggeringly crisp Retina display and quad-core Ivy Bridge CPU. The result is stunning – but expensive. Read the review.
Performance
Features & Design
Value for Money
Overall
Specs
$2499 AUD
(pricing info)
Copyright © Alphr, Dennis Publishing
Tags:
apple display hardware macbook pro retina review
By Sasha Muller
Sep 12 2012
5:22PM