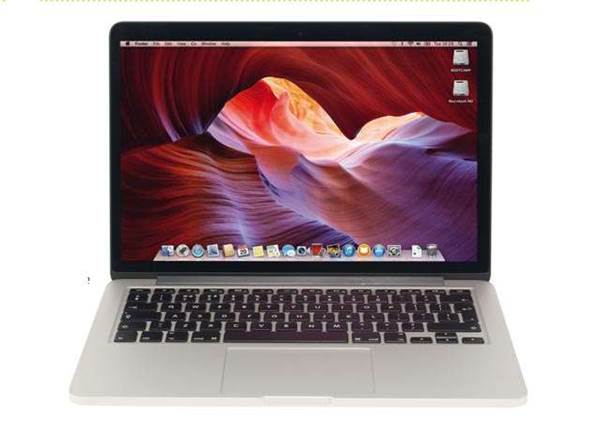 While all eyes were on the new iPads at Apple’s autumn keynote, the company also revealed an update to its 13in and 15in MacBook Pro with Retina display models. It heralded the arrival of Intel’s Haswell CPUs, but the big surprise was the price cut, which saw the entry-level MacBook Pro 13in with Retina display tumble to $1599.
The price isn’t the only thing that’s smaller: the MacBook Pro’s weight has dropped from 1.63kg to 1.55kg. It’s lost a millimetre around the waist, too, so it’s now 18mm thick. The whole package,
including the power supply, weighs 1.81kg.
Newsletter Signup

I have read and accept the privacy policy and terms and conditions and by submitting my email address I agree to receive the Business IT newsletter and receive special offers on behalf of Business IT, nextmedia and its valued partners. We will not share your details with third parties.
Under the surface, Apple has rung the changes. Gone are the Ivy Bridge CPUs of old, replaced by a trio of Intel Haswell options: two Core i5 parts and a Core i7, the latter being an optional upgrade. There’s also a range of new PCI Express SSD drives, with capacities in the preconfigured models rising from 128GB up to 512GB, with 1TB an optional extra.
The move to Haswell delivers a whole range of improvements. In our Real World Benchmarks, the improvements were slight: the previous Ivy Bridge model, with its 2.5GHz Core i5-3210M CPU, 8GB of RAM and 256GB SSD, scored 0.73 overall; our review model, equipped with a 2.6GHz Core i5-4288U CPU, 8GB of RAM and 512GB SSD, edged ahead with 0.76.
Subjectively, it’s the new PCI Express SSD that brings the biggest boost. Whether you’re working in OS X or Windows 8 via Boot Camp, the MacBook Pro feels incredibly light on its feet.
Applications bound into view, and boot times are swift. In Windows 8, it blitzed the AS SSD benchmark: it achieved sequential read and write speeds well ahead of the fastest 2.5in desktop SSD we’ve reviewed, Samsung’s 840 Pro.
The arrival of Intel’s Iris Graphics 5100 chipset addresses one of our criticisms of the previous generation: it’s much more at ease with the demands of the Retina display. Flicking through web pages is smooth and fluid.
Intel’s Haswell also boosts battery life. With the screen dimmed and Wi-Fi off, the MacBook lasted 11hrs 4mins in our light-use battery test, run under Windows 8 Pro 64-bit.
The MacBook Pro’s Retina display still stomps all over the opposition. With a maximum brightness of 374cd/m2 and a contrast ratio of 1069:1, the MacBook Pro’s panel covers, and slightly exceeds, the sRGB colour gamut, and the average Delta E of 2.4 is top-notch by all but high-end monitor standards.
This is as good as laptop displays get, but the 2560 x 1600 resolution throws up minor issues. DPI scaling is essential to keep onscreen elements legible in OS X and Windows 8 alike, but with more apps adding Retina support in OS X, and Windows 8.1 delivering much-improved OS-wide scaling, it’s no longer the concern it was.
Connectivity hasn’t changed a great deal – there are still two USB 3 ports, twin Thunderbolt ports, HDMI and a full-sized SD card reader – but the addition of dual-band 802.11ac is welcome. It’s almost enough for us to forgive Apple’s decision to abandon the Ethernet socket in last year’s redesign.
It’s incredibly tough to find fault with the new MacBook Pro. There’s power aplenty, great battery life, a class-leading display and – thanks to Intel’s Iris GPU – the graphics performance the Retina display always deserved. Gram for gram, we can’t think of a laptop that delivers so much. The MacBook Pro 13in with Retina display is the best laptop money can buy.
Verdict
Subtle tweaks make a big impact - with a lightning-fast SSD and Haswell CPU, Apple has a winner on its hands with the MacBook Pro 13 inch with Retina. Read the review.
Performance
Features & Design
Value for Money
Overall
Specs
$2199 AUD
(pricing info)
Copyright © PC Pro, Dennis Publishing
Copyright © PC Authority, nextmedia
Tags:
13 apple display hardware inch macbook pro retina review
By Sasha Muller
Jan 23 2014
6:33PM