Apple iPad review: why it's a genuine leap forward 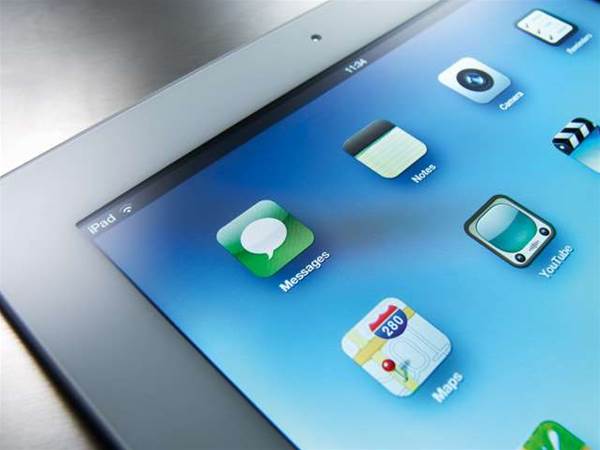 The most important part of any tablet, whatever the quad-core brigade may say, is the screen. Unlike any internal component, the screen is what you’ll still be noticing a week after your purchase, the part upon which all of your attention is focused. Upgrading it is the most effective way to improve any tablet.

We’re sure all manufacturers understand this, yet few are in a position to make such bold strides as Apple. Following the iPhone 4’s leap with its “Retina” display, the new iPad has a similarly groundbreaking 1536 x 2048 panel – that’s four times the iPad 2’s 768 x 1024 resolution in exactly the same 9.7in diagonal – and higher than many 27in LCDs. Apple calls it “resolutionary” – a word that makes us queasy, but the sentiment is spot on.

I have read and accept the privacy policy and terms and conditions and by submitting my email address I agree to receive the Business IT newsletter and receive special offers on behalf of Business IT, nextmedia and its valued partners. We will not share your details with third parties.
The extra pixels make a difference to the naked eye. The new iPad's icons (left) are visibly sharper than the iPad 2's. Click to enlarge.

The quadrupled pixel count doesn’t quite give the same pixel density as the iPhone 4 – it’s 246ppi compared to the smaller screen’s 326ppi – but it’s way ahead of any other tablet on the market. Asus will soon release its 10in Transformer Pad Infinity, with a 1920 x 1200 resolution; that’s as close as it gets.

The biggest beneficiary is text, so sharp that you can’t see the pixels any more. The same applies to images, provided the originals are of suitable quality. In fact, the new screen acts like a magnifying glass on every medium-resolution logo or banner ad you may have hoped no-one would notice, which will have web developers desperately scrambling to update their assets.

Apple has curated a section of the App Store highlighting the first Retina-optimised apps, and those we tested did a fine job of showing off the improvement. Flight Control Rocket and Real Racing 2 HD look superb, and the updated Kindle app shows the new iPad is a capable ebook reader as well.

Colour saturation is excellent, and our subjective impressions were backed up by the figures: we measured brightness at 426cd/m2, with an excellent contrast ratio of 906:1. Put simply, the new screen is a revelation, and if you find you’ve stopped actively marvelling at it after an hour or so, a trip back to an iPad 2 will be a shock to the system – it’s like going back to a standard-definition TV after watching Full HD.

Physically, the new iPad is all but identical to the older iPad 2. Click to enlarge.

Beyond the screen, you’d be hard-pressed to notice anything physically different from the iPad 2. The case is a millimetre or so thicker, and the device’s 652g weight is 50g heavier than the iPad 2 – only noticeable when you hold the two in each hand. But the extra weight is for a good reason, as we’ll see later. Everything else is in the same place, so the volume rocker and rotation lock are still on the right edge as you hold it in portrait mode, and the headphone socket and power button are on the top edge.

The bigger changes are inside, but they aren’t earth-shattering in their scope either. The new Apple A5X chip remains dual core and clocked at 1GHz, but it now features a quad-core GPU and teardowns have revealed 1GB of DDR2 RAM, up from 512MB last time.

If that sounds unimpressive, we should make clear that even with the higher resolution, the new iPad is every bit as responsive as its predecessor. Infinity Blade II and Real Racing HD, two of the most graphically impressive optimised apps, ran smoothly even with plenty of action onscreen. Only a few times did things stutter slightly under pressure, but never seriously enough to affect gameplay. Thanks to the upgraded hardware, the iPad now gets a few degrees hotter down the left-hand side – but this isn’t a huge concern.

The new internals put more strain on the battery than their iPad 2 predecessors, yet Apple claims the new iPad will last for as long as before, offering ten hours of Wi-Fi web surfing. How? The battery already took up a large proportion of the case – picture a thin, flat pack stretched across the rest of the components inside the rear of the case – but the cells are 70% larger, and the total capacity is increased by the same amount, from 25Wh to 42.5Wh.

We ran our tablet battery test – enabling flight mode, reducing the brightness to a medium, usable level, and leaving a video podcast looping – and the new iPad lasted 12hrs 32mins. That’s down from the iPad 2’s 16hrs 49mins, but it’s still ahead of most tablets.

The iPad’s camera has long been an area of complaint, even though the very idea of using a bulky tablet as a camera is faintly ridiculous. While the front-facing VGA camera remains unchanged, the rear camera has finally been upgraded to use the same lens featured in the iPhone 4S, albeit with a lesser 5-megapixel sensor.

The picture quality is high, with improved clarity and sharpness, and decent if not particularly vibrant colours. And the iPad will now finally shoot solid, detailed 1080p video, with the screen doing a wonderful job of showing off the resulting clips. Image stabilisation is quite apparent, along with a rolling shutter effect, but it isn’t a bad camera at all as tablets go.

The extra pixels can be seen close-up, with the new iPad (left) more tightly packed than the iPad 2 (right).

If this all sounds like a glowing endorsement of Apple’s latest hardware, there’s one concern that needs addressing. We’ve already seen the rising download footprint of some Retina-optimised apps, with Pages up from 95MB to 269MB and iMovie rocketing from 70MB to 404MB. Admittedly, some of this is down to additional features, but higher resolutions mean bigger apps, not to mention bigger downloaded newspaper and magazine issues via the Newsstand.

This would be fine if the iPad’s capacity had risen with its pixel count, but it hasn’t. The new iPad still comes in 16GB, 32GB and 64GB flavours at the same prices as last year’s models, either with or without 3G. (Apple is calling it 4G to match the US model, but it doesn’t connect to any available Australian 4G networks.)

This means the $539 Wi-Fi-only model, the most common way in for new buyers, is starting to look risky. If you like music and movies, and tinker with larger apps such as iWork or GarageBand (which is a massive 1.1GB on its own), it’s easy to imagine that 16GB being quickly swallowed up. Clearly, it depends on your habits; for more casual users it may not be an issue, but we’d suggest you consider the 32GB model, even if it is dearer.

Effects filters are smartly presented, but basic in their capability.

With photo-editing apps among the most popular categories in the App Store, it’s no surprise to see Apple stake its claim with an iOS version of iPhoto. Available both for iPhones and iPad 2 upwards, iPhoto is competitively priced – but how does it compare to rival apps?

iPhoto brings a few clever innovations to tablet-based editing. You can, for example, tilt the tablet to straighten a photo, and simply brush over areas with your finger to apply effects such as desaturation, darkening or sharpening – offering finer control than Snapseed’s selective adjustments.

Sliders to control saturation, sky tone and greens to the photo as a whole are neatly implemented. Unusually, Apple has felt the need to include help tooltips to explain features and icons – anathema to its normal “it just works” attitude.

This first version of iPhoto is far from flawless, however. Performance – especially when using high-resolution JPEGs or the repair brush – is surprisingly sluggish, even with the new iPad’s quad-core GPU. Edits can be lost without warning if you don’t follow Apple’s prescribed workflow. And the selection of artistic filters is not a patch on the creative filters within Snapseed, which can add real impact to photos snapped on listless smartphone and tablet cameras.

Comparisons with Photoshop Touch are a little unfair: iPhoto is primarily a tool for touching up photos, while Photoshop adds enthusiast-grade features such as adjustment layers, marquee/lasso selections and curve controls. Yet, rarely does Adobe’s more sophisticated palette of tools stutter in the same way as iPhoto’s, suggesting Apple’s developers have more work to do on multicore.

In short, for performing basic photo edits and creative effects we still prefer Snapseed, while iPhoto doesn’t come close to the sophistication of Photoshop Touch for those who prefer fine control over their edits.

The camera has been finally upgraded, with the same lens as in the iPhone 4S, but a lower resolution 5-megapixel sensor.

Beyond that, nothing else puts us off the new iPad. Android tablet owners may sneer at the lack of one of the latest quad-core processors, but the iPad is more powerful where it needed to be on the graphics side, with a much larger battery to match. Plus, there was no real need to physically redesign a tablet that remains so very popular.

Really, the new iPad is all about the incredible screen. The phrase “game-changer” is an overused one, but it’s difficult to think of a more appropriate expression; after all, the way things are done on the web, in Newsstand and in the App Store will have to be changed. Sites and apps that don’t optimise for its higher pixel pitch are simply going to look out of date.

If you already own an iPad 2 – or to a certain extent, the original iPad – the core tablet experience remains similar; if you avoid looking at any new iPads, you could carry on as before. But when you’ve seen that new screen, it will be hard to resist the temptation to stick your old iPad on eBay and pay the cash difference for the upgrade.

If, on the other hand, you’re on the hunt for your first tablet, it’s difficult to recommend anything else. The new iPad’s screen isn’t only a joy to use, it makes many other tablets feel dated by comparison