Apple HomePod review: great audio but not so smart 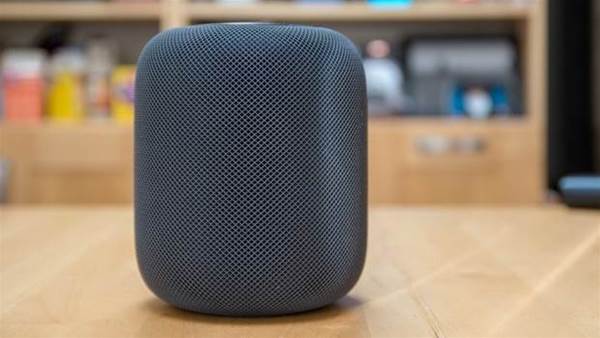 We test the audio of Apple’s smart speaker – and how well it can ‘listen’.

What’s the definition of a smart speaker? This an important question to answer because speaker that isn’t smart is just a speaker, after all, and there are plenty of those vying for your hard-earned cash.

So what does the “smart” bit in “smart speaker” actually entail? It’s quite difficult to frame an answer without reference to either Amazon Echo or Google Home. In this context, smart means responding to voice commands to play music or radio. It means controlling smart lights, making voice and video calls, and asking about the weather. It means setting up timers and alarms and, occasionally, telling jokes on request.

According to this definition of “smart”, as you’ll find if you read on, the Apple HomePod falls somewhat short. But that’s not the only meaning of the word smart and, in fact, in other ways Apple’s answer to the Amazon Echo is streets ahead.

Having briefly spent some time with the HomePod previously, we’ve now spent more time with it and tested it thoroughly against some competitors. Here’s how it fared.

It’s the design and engineering behind the HomePod’s audio technology that’s Apple’s big gambit in the smart speaker wars. On this front, there’s nothing like it on the market today.

Beneath that attractive yet unassuming exterior – that softly curved, 7in cylinder, all clad in spongy mesh fabric – is an incredibly complex arrangement of tweeters, woofers and microphones. 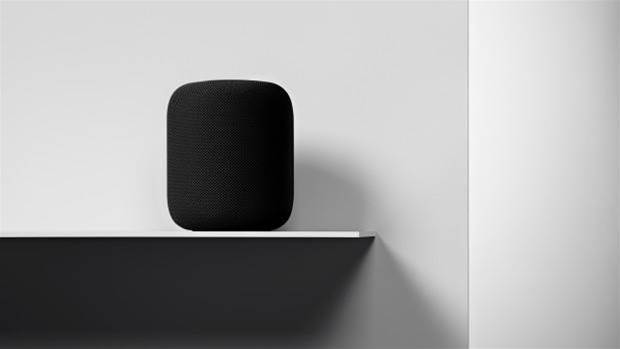 At the top of the speaker’s housing is an upwards-firing 4in woofer, which Apple tells us has a peak-to-peak cone “excursion” of 20mm. That’s not a traditional speaker driver spec. Normally, one would talk about parameters such as QTS, XMAX and VD when discussing the physical characteristics of a speaker driver before excursion distances. However, it’s still a lot for such a small driver and it goes some way towards explaining how the HomePod can reproduce such prodigious bass.

The trouble is that with more excursion can come a lack of control and definition and, if you push the driver to the edge of its performance, a greater risk of “bottoming out”, or distortion. More expensive speaker drivers combat this by using huge magnets, which allow for more exacting control.

The weight of the HomePod (2.4kg) tells you there’s almost certainly a pretty beefy one here, but Apple complements this with its own clever technology. Using a microphone, it continually monitors the position of the woofer and its output to prevent over extension and, thus, distortion while at the same time maximising performance.

That’s not all, though. The HomePod is also room aware. Pick up the speaker up and accelerometers inside tell the speaker to start a scan as soon as you put it down again. Now, this is not new tech. Sonos’ TruePlay does effectively the same thing but it’s a slow – entirely manual – process where you wave your iPhone around the room to scan your surroundings and optimise the sound. The HomePod carries out this process entirely automatically, while the music is playing, and the amazing thing is you can actually hear it working.

While playing Beck’s latest single, Colors, we moved the HomePod from the kitchen table onto an enclosed shelf, which with most speakers would be a recipe for muddy sound and overbearing bass and that’s certainly what I got at first.

Almost miraculously, though, after ten seconds or so the HomePod sorted itself out, rebalanced the treble, mids and bass and sounded great once again. We moved the speaker back onto the table, once more out in the open and, initially, the music sounded thin and lacking in body, but before long the bass was back, injecting the track with much-needed energy.

With seven tweeters surrounding the bottom of the speaker in a ring, the HomePod is also capable of directional sound and with each one working together with the speaker’s room-scanning tech, the HomePod is able to spread the sound so that music has both a sense of both space and coherence.

All good stuff. The question is: how exactly does this speaker sound in real-world use? The answer, quite simply, is that it’s preposterously good.

It’s better the Sonos Play One, which sounds flat and boring in comparison and it’s in a totally different league to Google Home and Amazon Echo 2. 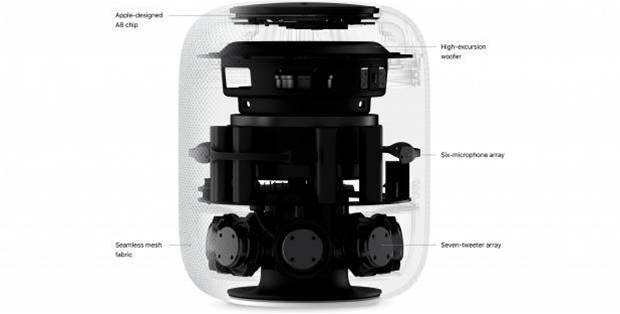 A speaker this size simply has no right to sound this good. In the mids and highs there’s a crisp sweetness to audio reproduction that most small speakers struggle to reproduce. And at the bottom end a surprising amount of low-down thump and richness. It’s perhaps not as warm in the mids as I’d like it to be and it can occasionally take on a bit of a harsh edge with some tracks when you crank the volume all the way up.

But most of the time we’ve spent with the HomePod has been spent gleefully exploring the full range of its sonic capabilities, and we can report that it has very few weaknesses.

And, having listened to the HomePod in a variety of different rooms, both carpeted and hard-floored, on shelves, speaker stands, tables and the kitchen worktop, we can confirm that, while it isn’t the best speaker we’ve ever heard, it is certainly the most usable and flexible.

The only negative is that there’s no way to take the output of the HomePod and send it to another audio system or speaker via 3.5mm output (it doesn’t have one) or Bluetooth transmission, as you can with the Sonos One, but its sound quality more than makes up for that in most instances.

Next: smart features and verdict