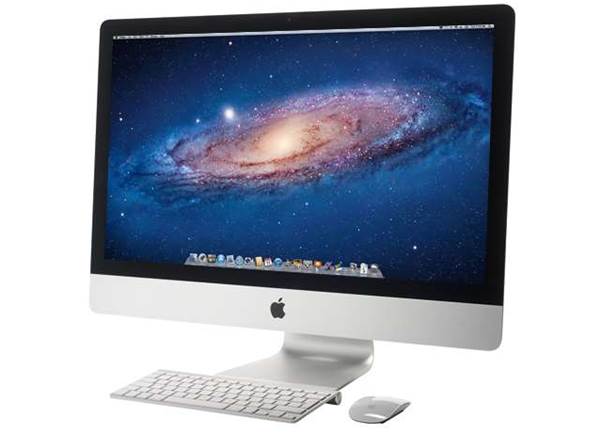 Although we saw the new iMac 21.5in at the end of 2012, Apple has kept us waiting impatiently for the redesigned iMac 27in.

Thankfully, that wait is now over. It’s a stunning transformation: where the previous model was a thick slab, the all-new incarnation squeezes into a body that’s only 5mm thick at its edges.

Peer around the iMac’s sides and those millimetres-thick edges arc into a bulged rear, a metal stand sprouting from its centre. The wide expanse of silver metal is interrupted only by a strip of ports in the bottom corner and the Apple logo in the centre. It’s beautifully plain and minimalist and, as king-sized all-in-one PCs go, impressively svelte.
Newsletter Signup

I have read and accept the privacy policy and terms and conditions and by submitting my email address I agree to receive the Business IT newsletter and receive special offers on behalf of Business IT, nextmedia and its valued partners. We will not share your details with third parties.
As ever, the glossy 27in display is the focus of attention. It has the same 2560 x 1440 resolution as last year’s model (Retina technology hasn’t made its way into the iMac range yet), but that’s no disappointment. There’s acres of space for multiple applications on the desktop, and the huge pixel count is matched with outstanding image quality, thanks to the IPS panel within.
Put to the test with our colorimeter, the iMac’s display measures up superbly. With a maximum brightness of 437cd/m² and a contrast ratio of 949:1, movies and photographs simply burst from the glossy panel. Colour accuracy is excellent, too. With an average Delta E of only 1.6, the iMac’s display compares favourably to the best monitors money can buy. If there’s any cause for complaint, it’s relatively minor: as with Apple’s iPad, the very darkest greys are crushed into black to give images a more solid, contrasty look.
With a starting price of $1,999, Apple’s iMac 27in is anything but cheap. The entry-level model partners a quad-core Core i5 CPU with an Nvidia GeForce GTX 660M GPU, 8GB of RAM and a 1TB 7200rpm HDD.
Our review unit was substantially more expensive. Taking the $2199 model as its base, it featured an upgraded Core i7 processor (adding $215), an Nvidia GeForce GTX 680MX GPU ($175) and a 1TB Fusion Drive ($300), Apple’s hybrid combination of a 128GB SSD and a 1TB HDD. It’s also worth mentioning that the RAM can be quadrupled to 32GB for $725.
It’s pricey, then, but deliciously potent: the iMac soared to a result of 1.03 in our Real World Benchmarks, just ahead of Dell’s similarly specified XPS One 27. What’s more, the Nvidia GPU delivered the best Crysis results we’ve seen from any all-in-one. At Full HD resolution and Very High quality settings, the iMac achieved a silky-smooth average of 58fps. Even upping the resolution to 2560 x 1440 was no problem: the iMac sailed through with an average of 36fps. There is fan noise during gaming, but it isn’t distracting.
That power goes hand in hand with plenty of features and connectivity. The bundled Bluetooth mouse and keyboard look the part and work well. There are also no-cost options to swap the Magic Mouse for Apple’s Magic Trackpad and exchange the compact keyboard for one with a numeric keypad.
The FaceTime HD camera has a resolution of only 720p, but it makes the best of every pixel: colours are bold and accurate and there’s a reasonable amount of detail. An integrated dual-microphone array keeps speech intelligible, and the integrated speakers are superb; it’s difficult to comprehend how Apple has packed so much clarity and volume into such a slender chassis.
There’s both dual-band 802.11n and Bluetooth 4 wireless networking, and the iMac’s rear includes four USB 3 ports, two Thunderbolt ports, Gigabit Ethernet, an SD card reader and a 3.5mm mini-jack, which provides both analogue headphone and optical digital outputs. The iMac appears to lack video inputs; but attach a mini-DisplayPort cable to the Thunderbolt ports and it’s possible to connect a secondary display or use the iMac itself as a monitor.
At $2889, this high-end version of Apple’s iMac 27in costs significantly more than its closest rival, Dell’s XPS One 27. However, the Apple surpasses Dell’s giant-sized all-in-one in almost every regard. The Dell’s display is good, but the iMac’s is sensational, and the superior GPU sees it trounce the Dell in our gaming benchmarks. If you’re in the market for the ultimate all-in-one PC, the Apple iMac 27in reigns supreme.
Verdict
Apple’s top-end 27 inch iMac reasserts its position as the best all-in-one. Read the review.
Overall
Specs
$2889 AUD
(pricing info)
Copyright © Alphr, Dennis Publishing
Tags:
2013 27 apple hardware imac inch review
By Sasha Muller
May 24 2013
1:13PM