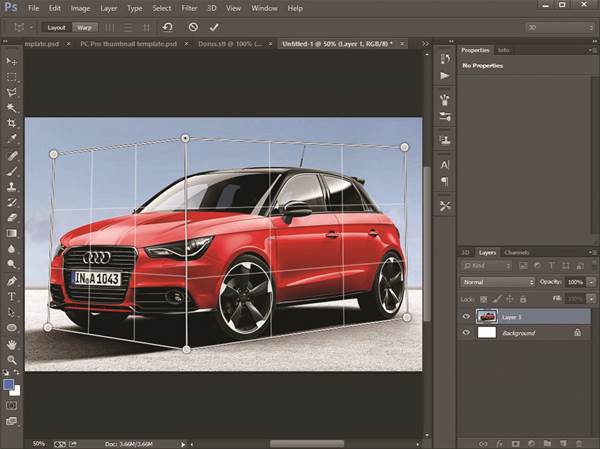 A subscription to Adobe’s Creative Cloud includes regular updates, and the latest round of downloads brings some significant changes – starting with the arrival of 3D printing in Photoshop CC.

It’s an unexpected addition; although Photoshop has had basic 3D support since CS3, it’s never provided a proper set of tools for sculpting and editing shapes. Rather, Adobe sees it as a finishing environment for models imported from modelling programs, or downloaded from online archives.

Objects can be imported in a variety of formats (OBJ, STL, 3DS, COLLADA and KMZ), and arranged as needed, with pannable previews offered in a variety of forms, from wireframes to fully rendered, custom-lit 3D scenes. Surfaces can be distorted with bump-map layers, and if you plan to output to a multicolour printer, you can either decorate your model with texture layers or paint directly onto its surface.

When you’re ready to bring your model to reality, Photoshop automatically fixes any gaps in your meshes, and adds scaffolding to support the design while it’s being printed. MakerBot, Mcor Iris and Solidoodle printers are supported natively, and third parties can add support for their own machines.

It remains to be seen how widely this new capability will be used. Creatives taking their first steps into 3D may appreciate the option of working in a familiar environment, but Photoshop doesn’t do the whole job – and since finishing 3D models has little in common with a typical 2D workflow, most users will still face a steep learning curve.

Other updates to Photoshop target traditional 2D images. The new Perspective Warp tool lets you adjust the perspective of an image element by splitting it into two meshes, joined at the front corner. If you want to place a car onto a road, for example, you can set its wheels squarely onto the tarmac without distorting the bonnet. It’s also now possible to link Smart Objects into your projects rather than embedding them – so when you update an Illustrator file that’s linked as a Smart Object, your Photoshop file will be automatically updated, too.

Illustrator itself gets a few new tools. New handles can be dragged to round off the corners of shapes. Double-click a handle and the Round Corners dialog opens, allowing you to specify a rounding radius or set chamfering options.

The Pencil tool has been enhanced, too, now generating much cleaner curves by default. You can adjust a slider to control the balance between precision and smoothness, and after your shape is created, you can (as before) simply draw over a segment to refine it. The Direct Selection tool can also now be used to stretch line segments directly into the desired shape; switch to the Anchor Point tool and you can turn straight lines into Béziers by simply dragging out a curve. Together, these changes make it easier and more intuitive than before to work with curved paths.

A final addition to Illustrator is integration with Adobe’s online Typekit service; you can now jump directly from the Font menu into the browser to try out typefaces that aren’t currently installed on your system, and install them for use at the click of a button. A similar feature has been added to InDesign CC, so if you open a document that uses a missing font, you can now install it from Typekit with a few clicks. For those using InDesign to create electronic documents, there’s also improved hyperlink management and support for new EPUB 3 features.

It’s impressive that Adobe continues to find ways to improve such well-established software. While not everyone will benefit from every update here, overall the Creative Cloud applications are starting to feel like a real step up from their CS6 incarnations.

Unfortunately, subscription-only pricing makes it impossible for us to give the package a wholehearted recommendation. If you’re amenable to the licencing model, then Creative Cloud is a phenomenal set of tools that just keeps getting better. But for those who prefer to own their software, and who are already using a recent copy of Creative Suite, there’s not enough here to justify switching.