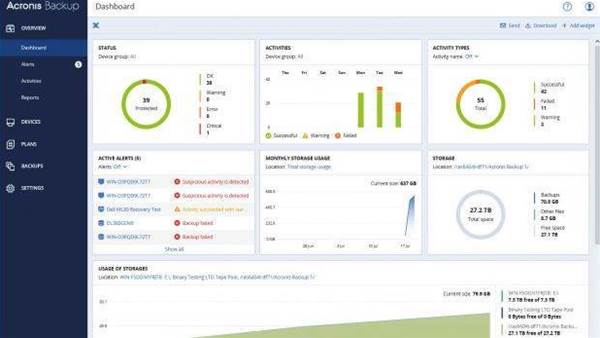 Acronis has every backup base covered, including ransomware protection, for businesses of all sizes.

Acronis is one of the biggest names in business data protection, and its latest Backup 12.5 suite delivers a wealth of new features, including more versatile backup options, broader platform support, and even built-in ransomware protection.

It’s a flexible option for businesses of all sizes, and is available for a wide range of operating systems, workstations, servers, mobile devices, virtual hosts and Office 365.

One key improvement for servers is virtualisation support: Acronis Backup now works with six hypervisor platforms, and can automatically convert backups to virtual machines. Acronis also defies those who've been predicting the death of tape, by adding support for standalone tape drives, autoloaders and libraries for automated archiving.

Backup 12.5 is available in standard and advanced editions; if you buy the former, you can upgrade to the latter by simply adding a new licence. The management server can also be deployed in the cloud, but this doesn't currently match all the features of the on-premises version.

It took us five minutes to install the management server on a Dell PowerEdge R740xd host running Windows Server 2016. The web console retains the slick design of the previous version, and adds a customizable dashboard with drag and drop widgets. Deploying agents to Windows workstations and servers took just 90 seconds per system. Where apps such as SQL Server and Exchange are being protected, you can just select the relevant agent – the standard system agent will be intelligently deployed along with it.

A wide range of backup destinations is supported: you can choose local and network shared storage, SFTP (secure FTP) servers, tape drives or Acronis' own cloud storage service. The Advanced version allows you to install the Storage Node service on your own Windows host, which provides central resource management and is required for the deduplication service.

Your backup strategy is assembled in the form of “plans”, which bring together backup sources, applications, destinations, schedules, retention periods and encryption options. Backups default to “always incremental”, but you can change this to suit your needs; traditionalists can also choose an old-school GFS (“grandfather, father and son”) strategy.

While backups may only run to a schedule, the new anti-ransomware feature keeps a constant eye out for dubious activity; if it sees a rogue program meddling with your files, it can automatically kill the process and restore the files from the agent's service cache. We tested this by encrypting a small group of files on a test host: the agent duly stopped the process and reverted all the files back to their original state in seconds.

To test regular backup functions, we set up a 27TB NAS appliance share as our destination, along with local storage on the management server. We also configured an HPE Ultrium LTO-7 15000 SAS tape drive connected to a Windows Storage Node host, allowing it to be used as a shared backup location.

Results were excellent. When we backed up 120GB of data from a Windows Server 2012 R2 system to a NAS appliance over Gigabit Ethernet, the operation completed at an average of 204MB/sec – much faster than a direct file copy, thanks to Acronis' smart use of compression. Backing up 25GB of test data to the LTO-7 tape drive also completed at a speedy average of 150MB/sec.

Hyper-V backups are a doddle too. After loading the agent on our host server, all VMs were immediately listed in the console. No agents are needed on VMs, and we found each of our Windows 10 VMs could be backed up to the NAS share in under three minutes.

When it's time to restore files from your backups, the Instant Restore feature can very quickly convert a full system backup to a VMware or Hyper-V virtual machine for the easiest possible access. Acronis claims an RTO (recovery time objective) of as little as 15 seconds; we tested this by recovering a Windows Server 2012 R2 system backup as a Hyper-V virtual machine. The conversion took 68 seconds, and while the first boot on virtual hardware was comparatively slow, we were sitting at a functional desktop around five minutes later. That's some way short of the claimed RTO, but getting an entire Windows server fully back in action in under 7 minutes is good enough for us.

Pricing is reasonable: $85 per workstation per year, $589 per server per year (or $275 for Windows Server Essentials), $739 per virtual host per year, and $239 per year for five Office 365 mailboxes. Discounts are available if you have more seats or servers.

Verdict
Acronis Backup 12.5 offers an impressive range of new features, and has virtually every data protection angle covered for businesses of all sizes. With its extensive virtualisation support, ease of use and excellent value, it's our new champion backup option.
Overall
Specs
From $85 AUD (per workstation per year or $589 per server per year)
(pricing info)
• www.acronis.com