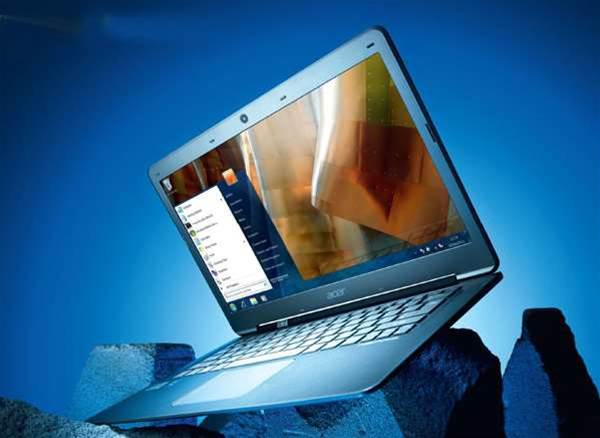 We first clapped eyes on Acer’s Aspire S3 back at the IFA 2011 trade show in Berlin. Given we’d already seen much of the competition, and been suitably impressed, Acer’s Ultrabook didn’t quite have the wow factor to match. Until, that is, Acer mentioned the price.

At $1055 for the entry-level model here, the Aspire S3 is by far the cheapest Ultrabook on the market, and since our time with those pre-production models, it looks as if Acer has been busy applying the spit and polish.

It isn’t quite as stunning to look at as Asus’ Zenbooks, but the Aspire S3 is still a bit of a looker. It’s pleasingly understated, with the chassis tapering to a curve around the edges of the brushed-metal lid, and matte silver spreading across the rest of the chassis. Push, twist and prod at the Acer and there’s a tiny bit of give in the base and a little more in the display above, but nothing serious. Compared to the wafer-thin Toshiba, the 1.37kg Acer exudes a far more rugged air.

I have read and accept the privacy policy and terms and conditions and by submitting my email address I agree to receive the Business IT newsletter and receive special offers on behalf of Business IT, nextmedia and its valued partners. We will not share your details with third parties.
Connectivity betrays the Acer’s budget: there are only USB 2 sockets and an HDMI port..

A quick scan through the Aspire S3’s specifications reveals exactly how Acer has squeezed so much into such a tiny budget. The Intel Core i5-2467M processor is no surprise, and neither is the 4GB of memory, but Acer has had to tweak the storage setup. Instead of a single large SSD, there’s a mechanical 320GB hard disk and a smaller 20GB SSD.

It’s a sensible compromise, with the SSD used only for hibernation data – it isn’t accessible as storage – and the traditional hard disk providing plenty of room for movies, music and games. If you’re desperate for a proper SSD, you’ll have to shell out for the top-of-the-range model, which costs $1450.

The lack of a large SSD doesn’t impair performance as much as you might expect. With a score of 0.55 in our Real World Benchmarks, the Acer is neck and neck with the Asus Zenbook UX21. Given the only difference is the Asus’ SSD, it goes to show how little difference an SSD makes to overall application performance. Subjectively, the Acer certainly doesn’t feel quite as zippy as Asus’ Zenbook UX31 – applications take a touch longer to load, and it doesn’t wake from sleep as promptly as its rivals – but, given the price difference, the tangible differences are minor.

While other manufacturers have “de-stickered” their Ultrabooks, instead engraving logos on their underside, the Acer has the silver Ultrabook-specific logos on its wristrest

Acer has economised more drastically on the Aspire S3’s battery. With only 5hrs 56mins in our light-use battery test, the Acer lags significantly behind the longest lasting Ultrabooks.

While it’s easy to cut the Aspire S3 a little slack in the performance stakes, the keyboard doesn’t put us in such a forgiving mood. Our first quibble is due to the ridiculously small cursor keys. Not only are these woe-inducingly fiddly to use, but the decision to shove the Page Up and Page Down keys hard against the left and right cursor keys left us regularly diving up and down the pages of Word documents and web pages. Only those with the tiniest of fingers will find otherwise.

Then there’s the general feel of the keys, or rather the lack thereof. Each keystroke comes to an abrupt stop, and the hard, flex-free keyboard surround doesn’t feel comfortable during longer periods of typing.

The “Elan” touchpad is a little better: the glass finish feels deliciously smooth under the finger, and the multitouch zooming and scrolling functions work well. It isn’t quite up with the best of its rivals, however. The pad depresses with a clumsy-feeling clunk, and we had trouble getting the two-fingered right-clicks to work 100% of the time.

With the Dolby Home Theater logo proudly emblazoned by the power button, you’d expect the Acer to be an entertainment tour de force, but this isn’t the case. With Dolby’s sound-enhancing features disabled, the two tiny speakers on the Acer’s flank are quiet and tinny. The Dolby movie, game and music modes improve things, adding a modicum of volume and clarity, but the overall effect is still underwhelming.

The Dolby Home Theater logo suggests that the Acer isa movie buff’s dream, but the tinny speakers and mediocredisplay are far from an Oscar-winning pairing

It’s a similar story with the Acer’s display. The glossy 13.3in panel simply doesn’t excel in any regard – it isn’t very bright, doesn’t have great contrast, and the narrow vertical viewing angles left us tilting the display back and forth to get it just so. Neither is colour reproduction a forte – our test images found the Acer struggling to reproduce the natural skin tones and clean, crisp whites without adding a bluish tint.

Connectivity is also disappointingly minimal, with only two USB 2 ports and a full-sized HDMI port at the rear, while an SD card reader and headphone output round off proceedings. With no room for an Ethernet socket at all, and no USB adapter in the box, you’re entirely reliant on the single-band Atheros 802.11n radio and Bluetooth 4 chipset for networking.

Ultimately, there’s plenty of room for improvement with the Acer Aspire S3, but this budget Ultrabook still holds plenty of appeal. While far from the last word in refinement, Acer has built a solid, attractive Ultrabook for much less than its competitors – and that, we suspect, will be reason enough for many to settle for second best.