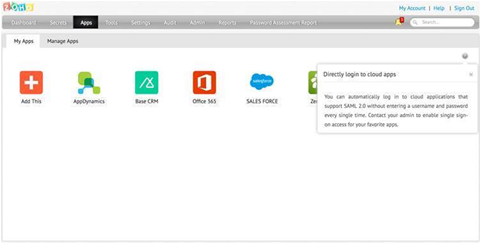 Password managers such as LastPass , KeePass and Dashlane have become increasingly widely used in the last few years. They make it easier to use different complex passwords for each service, but ultimately you are still using passwords.

Single sign-on (SSO) through the Security Assertion Markup Language (SAML) takes a different approach. Instead of having a separate identity on each service, the user's identity is maintained by an identity provider. When he or she tries to use a compatible service, it asks the identity provider to authenticate the user. If the user isn't already signed into the provider they are as asked to do so, then the provider sends a digitally signed response to the service. The service checks the signature, and then allows access by the user.

Zoho Vault started as a team-oriented online password manager, but its latest iteration also works as an identity provider that can be used with popular cloud applications including Box, Microsoft Office 365, Salesforce.com and Zendesk.

The number of out-of-the-box integrations is being steadily increased, but Zoho Vault can be manually configured to work with other services supporting SAML SSO.

Cloud SSO support is only provided as part of Zoho Vault's enterprise plan, which costs $US7 per user per month (with a five-user minimum) and includes other admin features, such as Active Directory integration.

The lower-cost plans of Zoho Vault, which range from free to $US4 per user per month, still work as a standard password manager but with team-oriented features. Depending on the plan, these features include the ability to manage groups of users and groups of passwords, secure password storage and sharing, usage tracking, password generation, and support for two-factor authentication.

Some of these features make Zoho Vault especially useful for managing access to accounts that must be shared, such as a business's presence on Twitter, Pinterest and other social sites.

“A team password vault is a good starting point for companies, but it only solves part of the problem. Password-based authentication, automated with tools, isn't standard-based and it still runs the risk of disclosing passwords,” said Zoho director of product management Rajesh Ganesan.

“By adopting SAML-based single sign-on, Zoho Vault provides a proven and standard-based method to effectively manage and track all application access. The password is not required or disclosed anywhere, allowing IT some elusive peace of mind.”

A 15-day free trial of Zoho Vault Enterprise is available, although it is for a maximum of five users.