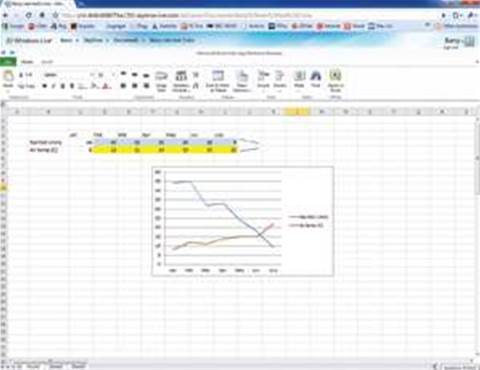 Microsoft decision to release a free Web version of Office is big news for the 20+ year old software suite. But does free actually mean it's any good?

When Microsoft announced it was producing free web versions (currently in beta, and to become available for consumers later this year) of its Office apps, many people wondered whether the company was about to give away the crown jewels.

This most certainly isn't the case. While it is (or, in some cases, will be) possible to create documents from scratch using Office Web Apps, the limited range of features on offer will make them unsuitable for all but the most rudimentary of documents.

The Office Web Apps are, however, perfectly suited for sharing and editing documents created using the desktop client software. Here's what you can expect from the four Web Apps.

Excel
Excel is the most accomplished of the Web Apps so far. Spreadsheets can be both viewed and edited by more than one person simultaneously, and even on complex workbooks with formulae, graphs and dependencies, edits are applied with impressive speed.

The Excel Web App contains only a small fraction of the features found in the desktop software: the Home and Insert tabs are the only two available, and the Insert tab contains only Table and Hyperlink. However, it supports all the features of Excel 2010. Sparklines, for example, are displayed and refreshed even though you can't add them directly from the Web App.

Word
At the time of our test, the Word Web App allowed us only to view documents, so it's difficult to draw any firm conclusions on how useful it will be. One surprise is that Microsoft has no plans to implement simultaneous editing on Word documents, a feature that's one of the major attractions of Google Docs.


The Word Web App viewer coped well with the 174-page test document we threw at it, maintaining all the complex formatting and tables, unlike Google Docs, which point-blank refused even to upload the 15MB document because it smashed past its paltry 500KB limit. The Word Web App is also blessed with the desktop software's revamped Find feature, making it much easier to scan large documents online.

PowerPoint
The PowerPoint Web App allows you both to edit and view full-screen slideshows, but are we planning on running all our presentations from the browser? Not quite. For starters, the PowerPoint Web App is currently incapable of displaying video embedded in slides. Other nice touches such as transitions and advanced animations are also unsupported in online slideshows.

It's reasonably easy to make edits to presentations online, and the existing template and fonts are preserved when you add new slides to an existing presentation, even though there are no pre-defined templates and only a limited selection of fonts if you create a slideshow from scratch. There are some bizarre limitations in the editing options, though. For example, it's possible to add a 3D photo frame to an uploaded photo, but there's no way of resizing the image.

If Microsoft can iron out the presentation and editing kinks, this could be one of the better Web Apps.

OneNote
At the time of writing, the OneNote Web App was completely disabled, so we can only relay what we've been told about it. Microsoft says OneNote will offer simultaneous editing, as well as features such as AutoCorrect, spellchecking and the option to insert pictures and tables.

If you are interetsed in our full review of Microsoft Office 2010, it's in the April issue of PC Authority magazine.