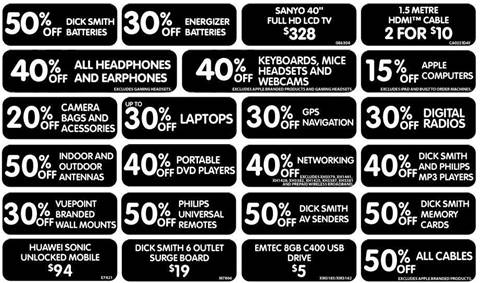 Save up to 50% on select Dick Smith electronics, including laptops, home networking, keyboards, mice, headsets, batteries and memory cards.

Struggling retail chain Dick Smith has announced a one-day ‘XXXL Sale' at its onsite stores this Saturday 26th May.

For one day only, the electronics specialists will slash up to 50-per cent off selected technology products, including laptops, home theatres, GPS units, home networking gear, headphones, MP3 players, video game consoles and more.

It's worth noting that Dick Smith hasn't released much info in regard to specific models or brands, so be prepared for the possbility of a non-event, like this one at Harvey Norman was. Naturally, stock is expected to be limited so it might be worth setting your alarm clock too.

If you spot any good bargains at the sale this weekend, let us know in the comments section below.