Xero taps iOS split-screen to do two things at once 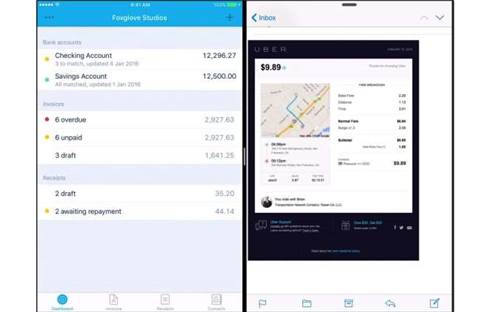 Xero cloud accounting gets an updates to take advantage of the latest iOS features.

Xero's mobile app for iOS now supports split-screen operation on the iPad Air and iPad Pro, allowing users to do two things at once.

iOS 9 introduced Split View, which divides an iPad Air 2 or iPad Pro's screen so two apps can be used simultaneously.

Xero says its new support for this feature in its iOS app means users can do things such as viewing orders from their customers while creating an invoice, creating expense claims while looking at a receipt, and make video calls to a customer via FaceTime with their invoice visible on the screen.

The app also includes extended 3D Touch support on the iPhone 6s and iPhone 6s Plus so users can peek and pop into invoices, receipts and contacts.

"We're really excited about split-screen multitasking. A whole host of tasks that previously gave people cause to put down their iPad and log in to their laptop are now just as easy to do on their iPad," said Xero product manager Luke Gumbley.

"Business owners tell us they want more efficiency in their business operations to save them time. The key is to ensure they have access to the right tools for the right task, no matter their size. Xero's split screen for multitasking app on iPads will give business owners back valuable time."

In related news, an update to the Xero Me app adds leave requests and the ability to view pay history.