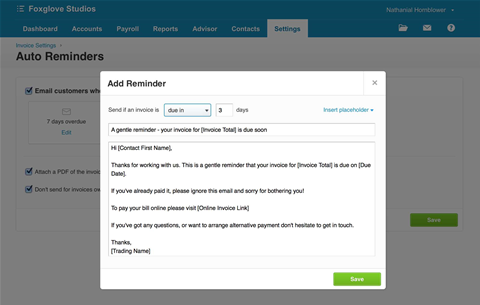 A new Xero feature automates the task of reminding customers of their unpaid invoices.

Originally revealed at XeroCon in August, invoice reminders are aimed at getting payments in more quickly.

At that time, invoice reminders were to be added to the accounting system within 90 days, but a month later that slipped to "the next few months."

Xero released the new feature last week, either meeting the original timeframe or being so close that it doesn't really matter.

The way it works is that you can tell the system to automatically send email reminders when invoices are 7, 14, or 21 days overdue, customisable to up to five periods of your choice.

Xero provides carefully-worded and increasingly stern templates for each of these messages, which can be modified to suit your specific requirements. When the emails are sent, the templates are filled out with specific information about the customer and the unpaid invoices.

If you don't want to chase very small debts, the feature lets you set a minimum threshold. There are also ways to stop selected customers being reminded automatically and to prevent reminders being sent for specific invoices.

There's even provision for sending a reminder that an invoice is falling due. Xero suggests this can be helpful for customers that are invoiced less frequently, but we think it might also be handy when dealing with customers that have been granted extended credit terms: if you allow someone 30 days rather than your usual 14, you'd likely be particularly keen that they pay on time. Since reminders can include a link to an online copy of the invoice featuring a 'pay now' button, it arguably makes life easier for the customer too.

Various reminder systems with additional capabilities are already available as add-ons for Xero, but this new feature may be all that many businesses need in this regard.

You can read more about Xero invoice reminders here.