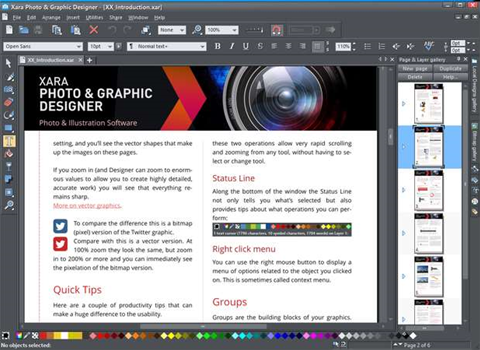 If Adobe Creative Cloud is too rich for you – as it probably is for most small businesses – Xara Photo & Graphic Designer offers a much more affordable option for photo-editing, illustration and graphic design work.

A redesigned photo frame enables easier resizing, rotating, straightening, panning and clipping an image, just by using control handles within the frame itself. There are no separate dialog boxes, no browsing the menus or toolbars; your attention stays completely focused on the page.

New static and Smart Photo grids help you organise and present your images in a smarter, cleaner way. Around 30 photo filter pre-sets can apply various lighting, contrast and saturation effects to give your image a brand new look.

If you need more control, the Effects Painter applies effects like Brighten, Dodge and Burn to specific areas of the picture. Xara’s SmartShapes have been extended with new charts, text panels, photo panels and an enhanced Spiral SmartShape.

Elsewhere, the Font Awesome collection has been updated, and you now also get more than 1,500 Google Material Design icons.

The application has been released under Xara’s ‘365’ branding, which marks the move from yearly to continuous development. Buy the app and you’ll now get new features and content as they’re developed, for a full year. After that, you can pay for another year, or just keep and use the program forever as it is.

Best of all, Xara Photo & Graphic Designer 365 costs just £49.99 from Xara’s UK website which converts to just $91 (at the time of writing) after the recent plunge in the British pound.