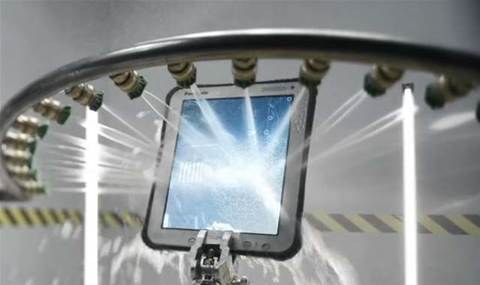 They're not cheap, but this Toughpad and Toughbook are the type of computers that will suit working the rain, dust and will cope with being knocked around.

As much as we think the iPad is one of the best tablet computers around, you're not likely going to go using it in the rain, or throw it around on a building site.

But there are computers built for this sort of treatment.

I have read and accept the privacy policy and terms and conditions and by submitting my email address I agree to receive the Business IT newsletter and receive special offers on behalf of Business IT, nextmedia and its valued partners. We will not share your details with third parties.
The Toughpad FZ-G1 tablet computer is the thinnest and lightest fully rugged tablet, according to Panasonic.
It is certified to IP65, which means should be able to withstand dust and powerful water jets but not complete immersion. It can withstand drops of up to 1.2 metres. So in theory, it should be ok if used out in the rain or knocked from a desk.
The FZ-G1 includes a 10.1in touchscreen with "outdoor display technology" and weighs 1.1kg. That is fairly hefty as tablets go, but that's the price of ruggedness. The price starts at $3,299.
The Toughbook CF-AX2
For those who like a keyboard, the Toughbook CF-AX2 convertible ultrabook features a 11.6in touchscreen that flips over so you can also use it as a tablet.
How tough is it? The CF-AX2 is "able to withstand drops of up to 76 cm and 100 kgf pressure on the screen without damage," according to Panasonic. There is no mention of water resistance that we could find, though. The price starts at $2,499.
Copyright © BIT (Business IT). All rights reserved.
Tags:
cfax2 fzg1 hardware laptop panasonic tablet tough toughbook toughpad ultrabook windows 8
By Daniel James
Apr 10 2013
12:32PM