Windows, iOS or Android - which platform do you choose? 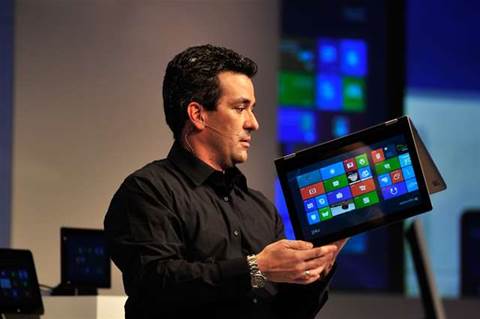 If you are not sure about switching platforms, this summary could help you make your mind up.

[This article was published earlier as part of a comparison of 14 different tablets in the Feburary issue of PC & Tech Authority magazine.]
This was the key question we wanted to answer at the outset of this group test [published in the February issue of PC & Tech Authority magazine]. We’ve compared Apple iPads with Android tablets before, but we’ve never thrown Windows tablets into the mix as well. Although the overall outcome hasn’t changed – the iPad remains top dog when it comes to tablets – the choice today isn’t as straightforward as it once was.
Newsletter Signup

I have read and accept the privacy policy and terms and conditions and by submitting my email address I agree to receive the Business IT newsletter and receive special offers on behalf of Business IT, nextmedia and its valued partners. We will not share your details with third parties.
This is mainly down to the hybrid nature of Windows 8. The tablets running Microsoft’s OS might not compete with the iPad and Android tablets when it comes to dedicated touch software – the Windows Store is sorely lacking in the quality and quantity of apps available – but they’re far more capable work devices.
It’s possible to extend your screen onto a secondary monitor from any of the Windows 8 devices, whereas the Android and iOS tablets will – less usefully – simply mirror their displays.
Although Android tablets do allow the connection of storage devices and peripherals through optional cable adapters, they don’t always work perfectly. The Nexus 10, for example, currently requires a paid-for app to enable files to be imported and exported from an externally attached USB drive. Windows 8 tablets, on the other hand, just work – either via a standard USB host socket, or an OTG adapter (USB On-The-Go).
Additionally, when you consider that the Windows 8 tablets can also run desktop programs such as Photoshop and Office, in addition to touch-friendly Windows Store apps and games, they begin to look like the ultimate all-round solution: lighter than a laptop, or even an Ultrabook, yet capable of serious computing.
We see potential in the world of Windows tablets, but what counts against them is what happens when you separate them from their keyboards.
Yes, you can still browse the web, but the lack of high-quality apps means it can be a frustrating experience. Even when there are decent apps available, the prices are often significantly higher than on other platforms. That’s before we even get onto the frustration of navigating Windows menus or using desktop software without a mouse to hand. Good luck tweaking the power profiles with touch alone, let alone trying to edit snaps in Photoshop.
To a lesser degree, this is also the reason the Android tablets come second to the iPad once again. There’s nothing wrong with the hardware – we’d love an iPad that was as light as the Sony Xperia Tablet Z with its waterproofing and infrared transmitter. But although there are plenty of apps on Google Play, many still lack a user interface that has been designed specifically with larger-screened tablets in mind. The Apple App Store, in contrast, offers iPad owners an embarrassment of riches.
With hardware prices coming down all the time, and more people opting for these cheaper alternatives, there will inevitably come a time when we recommend something other than an iPad. However, that doesn’t look like it will be happening any time soon.
Copyright © PC Pro, Dennis Publishing
Copyright © PC Authority, nextmedia
Tags:
android hardware ios or tablets windows
By Staff Writers
Feb 26 2014
4:07PM