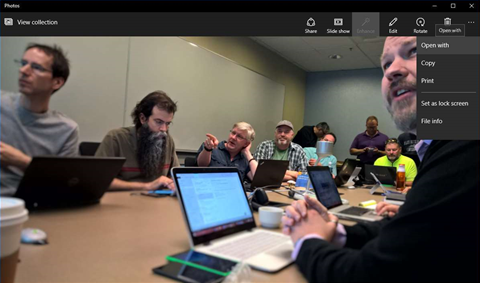 Microsoft has announced the release of Windows 10 Build 10162 to the Fast ring.

Gabe Aul’s blog post on the release said the company was “focused at this point on bug fixing and final polish”, and so there are no new features, but testing has shown “it has better reliability, performance, battery life, and compatibility than any Windows 10 Insider Preview build so far.”

If you’ve not kept up with the recent page of developments, Build 10159 delivered new wallpaper and logon UI, and apparently over 300 fixes.

There’s now an Open With button in the Photo Viewer

But the big changes cropped up in build 10158, which finally rebrands Windows 10 browser as Microsoft Edge. This isn’t just a cosmetic change – additions include bookmark imports, password management and form filling, new tab customisations and more – but a change in App ID means you’ll lose your favourites, cookies, history and other data unless you back it up before the upgrade (instructions are here).

Cortana has been enhanced with a dark theme colour, Outlook-like flight tracking (if you get an email about flights or package information from supported providers then Cortana understands, and alerts you about them), the ability to send emails, and integration with Office 365 (if your company is opted into First Release for Office 365).

Elsewhere, there are assorted smaller user interface extras and refinements (swipe up on the left side of the Start Menu to open All Apps), there’s a fix for the issue that was preventing upgrades on Surface 3, and – yes – the Photos app now supports animated GIFs. Truly, Microsoft’s work is almost done.