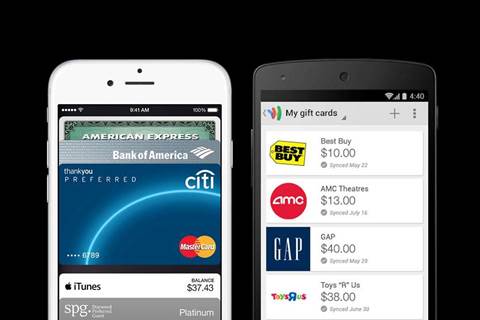 The recent announcement of the impending UK launch of Apple Pay might indicate that an Australian debut isn't too far away. But it's possible we'll see Android Pay first.

The Apple Pay contactless payment system introduced in the US with the iPhone 6 caused a lot of excitement in its home market precisely because a very large proportion of card transactions were still swiped in that country. Since relatively few merchants were previously set up for contactless payments, this gave the false impression that Apple Pay was 'special.'

Well, it was special in the sense that it was the first use of Visa's tokenisation technology. Instead of revealing the credit card number, Apple Pay delivers a one-time token that is processed as if it were a card number. This provides additional security for customers, as there's no possibility of the details being stolen if the merchant's systems are hacked.

The use of tokens - and Apple's desire to 'clip the ticket' on every Apple Pay transaction - is what requires the co-operation of card-issuing banks.

But from the customer's point of view, an Apple Pay transaction is much the same as any other contactless transaction apart from the reassurance given by the need to authorise the transaction via the Touch ID fingerprint scanner. Ordinary contactless credit and debit cards can be used by anyone.

But what's holding up the arrival of Apple Pay in the Australian market? After all, Australia is traditionally in the first or second wave of countries when it comes to Apple rollouts.

Ovum financial services technology senior analyst Gilles Ubaghs thinks the most important issue is that Apple has been able to extract a 0.15 percent transaction fee from participating banks in the US and UK. But as interchange rates in Australia are limited to around 0.33 percent, that's not going to fly here. We suspect Apple would be reluctant to accept a smaller fee, as that would weaken its negotiating position with banks in countries that do allow higher interchange fees.

Secondly, Visa has developed VDEP, which is a separate technology system that allows affiliated banks to connect with any participating electronic wallet provider. Importantly, explained Ubaghs, while it eliminates the need for individual agreements between banks and wallet providers, it also forbids pass-through fees on transactions.

"Android Pay is the first major wallet to sign up to VDEP... With no per transaction fees involved, at this rate Android Pay could possibly hit Australia before Apple Pay," he said.